2016 Padma Awardees Who Featured In Outlook 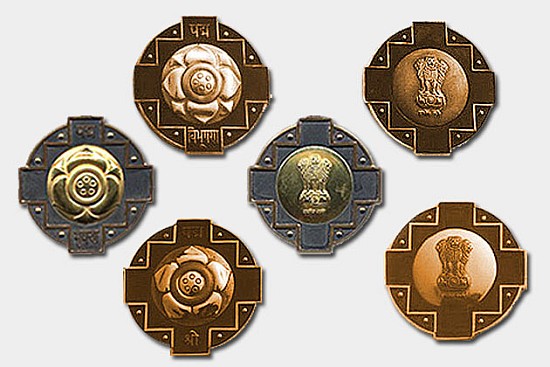 A free and vibrant press is the best safeguard for democracy and all the values that it implies. Implicit in this argument is the fact that the press cannot be a monopoly. It is therefore necessary that the press, or for that matter the television medium, should be subject to competition. This is accepted without question insofar as the Indian media is concerned. Why should there be a change in the situation with respect to foreign media?

2. In 2015 for Outlook's 20th anniversary, Anupam Kher who is now a Padma Bushan, told us why he dislikes Outlook:

In terms of presentation, it’s crisp, to the point and has those interesting bits of humour. However, I often wonder if the coverage is biased or tilted, or is it really the point of view of the magazine? Because given the stature of the magazine, it should ideally have a rather unbiased ‘outlook’.

Also, read his answers to the 10 questions Outlook asked him.

3. In November 2012, Francois Gautier, the author of The Guru of Joy, did a piece on Sri Sri Ravi Shankar, now a Padma Vibhushan awardee:

Sri Sri Ravi Shankar was an exceptionally precocious adolescent, who showed a keen interest for the spiritual world early in life. He completed his degree in science and Vedic literature by 17. He was young, but already felt that a special destiny awaited him.

4. In 2014, Outlook carried exclusive extracts from Vinod Rai's memoir The Diary of The Nation's Conscience Keeper: Not Just an Accountant. He has been selected for a Padma Bhushan this year:

Why, and under what compulsion, did the prime minister allow Raja to have his way, which permitted a finite national resource to be gifted at a throwaway price to private com­panies—private companies that, going by the minister’s own admission, were “enjoying the best results...which was also reflected in their increasing share prices”? If only Prime Minister Manmohan Singh had responded differently; if only he had instead said—“I have received your letter of December 26, 2007. Please do not take any precipitate action till we or the GoM have discussed this.” Such a letter would have changed the course of UPA-II.

5. In July 2015, Neha Bhatt, in her piece on Architecture for Outlook, wrote about Hafeez Contractor who has been named a Padma Bhushan awardee:

Contractor, the much-sought after Mumbai architect, is used to finding himself at the other end of this debate. The man behind Infosys’s offices across south India and multiple struct­ures in DLF city, Gurgaon, is often dismissed by those in the business for endorsing a copycat culture. He says he’s just making the most of the current swing of things. “We should be thankful to the builder lobby for driving the profession where the government is not. We have nothing to show post-independ­ence because the government isn’t bothered. The construction boom has at least provided us some food for thought,” he says.

6. Celebrated Bharatanatyam dancer, Pratibha Parhlad, who has been named for a Padma Shri wrote a piece on her uncle CNR Rao in December, 2013 when he had been felicitated by the Bharat Ratna:

CNR bears his honours and the immense volume of his work—1,600 research papers, 49 books, membership of all the major science academies of the world, the 80-odd doctorates conferred upon him—ligh­tly. He believes that life, for him, is “climbing a limitless ladder”, also the name of his autobiography. Besides his work, he loves music, his single regret in life is not learning to play the piano. He attends performances regularly and hosts artistes at his foundation and at IISC.

7. In June 2015, Madhavi Tata did a piece on director S.S. Rajamouli, who has now been named for a Padma Shri:

Rajamouli is one of the few directors stars call up to ask if he has a role for them. Producers offered him Rs 10 crore in fees way back in 2010. In an industry where movies are completely star-oriented, Rajam­ouli has changed the formula by never sticking to a formula.

8. In October 2015, right in the middle of the controversy over beef, historian and critic Pushpesh Pant wrote a piece for Outlook called 'There’s No Meat To The Vegetarianism Myth':

Kashmiri Brahmins take justifiable pride in their cuisine, which is predominantly meaty. It’s only on specific days, say a marriage, that the ritual meal is Vaishnavi—that is, prepared only with vegetables. Brahmins in Himachal Pradesh and Uttarakhand treat the meat of goats sacrificed at Kali temples and at the altar of village deities as prasad and share it in community meals. The Maithili Brahmins of Bihar, or those of Bengal and Orissa too don’t deny themselves the pleasures of meat and fish delicacies. The Saraswat Brahmins who dwell along the western seaboard have for generations sustained themselves on ‘fruits of the ocean’.

9. Author and journalist Ashok Malik, now a Padma Shri, wrote a column on Narendra Modi in May 2014:

Has Modi over-promised and will he succeed? We will know in five years. What we do know already though is that he has broken the back of the Indira legacy. Thanks to Modi, India has finally accepted that Indira-Gandhianism—or its epigone versions, Sonia-Gandhianism and a caricature Rahul-Gandhianism—is past its sell-by date.

He has also written a number of other columns for Outlook.

10. In March 2013, Aravind Adiga did a piece on Kannada literature's controversial and pro-Hindutva writer S.L. Bhyrappa who has been named for a Padma Shri this year:

And who is Santeshivara Lingannaiah Bhyrappa? Winner of the Sahitya Akademi award, he’s the author of 21 widely read and sometimes very controversial Kannada novels. These achievements are overshadowed, however, by a single fact: S.L. Bhyrappa is pro-Hindutva. His unvarnished political opinions—he opposes religious conversion and cow slaughter, and thinks that Tipu Sultan is a religious fana­tic rather than a national hero—embarrass even his own admirers.

11. In 1998, journalist Sanjay Suri reviewed well-known thespian Saeed Jaffrey's autobiography calling it a sexual diary that revealed too much:

The chronology of sexual encounters gets a bit pointless—at times this begins to read less like the autobiography of a man than the biography of a penis.

12. In March 2015, Gauri Kamath did a piece for Outlook on Dilip Shanghvi became India’s richest man and is now a Padma Shri:

Dilip Shanghvi became India’s richest man like he did everything else—with minimum fuss. On March 4, the pharmaceuticals entrepreneur became wealthier than Mukesh Ambani. As shares of Shanghvi-controlled Sun Pharmaceutical Industries (he is founder and managing director), and group company sparc surged on the bourses, his net worth reportedly hit $21.7 billion, a shade ahead of Ambani’s at $21.6 billion.