In Chennai, A Rs 450 Crore Building With An Identity Crisis

The controversy over a hastily constructed state secretariat refuses to die down. 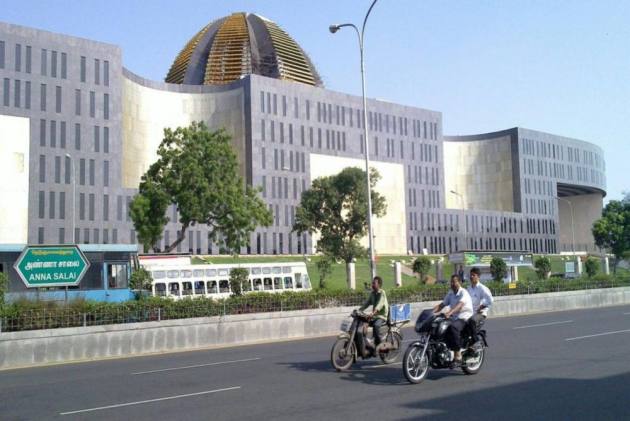 It was meant to be the seat of power. But today it treats the sick and the poor. Instead of Ministers and bureaucrats its corridors are frequented by doctors and nursing staff. Both the former Chief Ministers – one who built it and the one who converted it, are dead. Yet the controversy surrounding the sprawling and unsightly building in the heart of Chennai refuses to die down.

As Chief Minister, Karunanidhi had commissioned the new secretariat complex – that would also house the state assembly – in 2008 citing lack of space at Fort St. George which anyway belongs to the army. A contest was held to finalise the building’s design after which the contract was quickly awarded to ETA, a favourite construction conglomerate of Karunanidhi. Originally planned for 18 lakhs sq ft at a cost of Rs.200 crores the building’s dimensions were suddenly increased by an additional 1.30 lakh sq ft and the final estimate was raised to Rs.465 crores.

In March 2010 even though the interiors of the building on Anna Salai opposite ‘The Hindu’ had not been completed, Karunanidhi hurriedly had the complex inaugurated by the then Prime Minister Manmohan Singh and Congress president Sonia Gandhi. The rush to have the two leaders inaugurate the complex was aimed at defusing the tension between the DMK and Congress over the 2G scam which was raging at that time.

Since the two leaders could not be seen throwing open a partially built building, the incomplete interiors of the assembly hall were covered with large curtains. The real make believe happened at a greater height. Since a giant dome that would crown the Assembly hall would take another six months to complete, Karunanidhi had film art director Thotta Tharani to construct a makeshift dome to give the building a look of completeness. Essentially the Congress leaders were throwing open a hastily put together film set.

After the inauguration Karunanidhi managed to hold a two sessions of the Assembly there and the secretariat functioned both out of the new building and the old causing immense hardship to officials. But once Jayalalitha returned to power in 2011 with a massive majority she declared that the Assembly and the secretariat would function only out of Fort St. George. She ordered an enquiry commission to probe the building of the new complex and also declared that it would instead house a multi-specialty government hospital and a medical college attached to it. She also sanctioned Rs.15 crores to convert it into a hospital.

Recently the High Court directed the commission of enquiry to be wound up after criticising that it had done no work in the last six years even though Rs.4.5 crores had been spent on it. The High Court also termed the tax payers’ money spent in constructing the complex, then converting it into a hospital and the money splurged on a non-functioning enquiry commission as a “national waste.” Now the state government has referred the irregularities in the award of the contract and the construction of the complex to the state’s vigilance and anti corruption directorate. The probe is expected to target DMK president M.K. Stalin, who was deputy Chief Minister during that period and DMK Treasurer Durai Murugan, who was the PWD Minister. The last has not been heard on the white elephant that squats in the middle of Chennai.