'A Titanic Disaster For The Government' 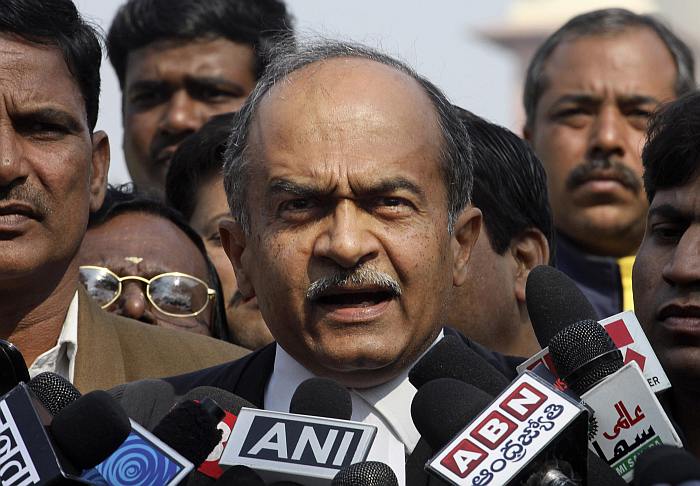 Vinod Mehta, Outlook's editorial chairman, put it in perspective when he pointed out that the judgement today is 'a Titanic disaster for the government,' coming as it does just before the UP elections, thus making it difficult for Congress to talk about Ms Mayawati's corruption.

'It effectively cooks Mr Raja's goose and the noose is getting closer and tightening around Mr Chidambaram. What remains to be seen,' he added, 'is the domino effect and how long they would be able to protect the Prime Minister and keep him isolated, because so far his defence was that he went by the advice of his finance minister.'

Mr Mehta also invoked the Radia tapes in this connection and pointed out that one just needs to connect the dots between the conversations in those tapes and what happened — lobbying for certain ministerial positions, the nexus between various corporate houses and many of those exposed in those tapes.

But it is not just about the political fall out, which is bound to ensue. Also at stake is not just the future of telecom particularly in the markets affected by the cancelled licences, but also government policy with respect to other natural resources.

Among the 122 licences issued in January 2008 on first-come first-serve basis by the then telecom minister A.Raja, Uninor was allotted 22 pan India licences, Loop 21, Sistema-Shyam 21, Etisalat-DB 15, S Tel 6, Videocon 21, Idea 9 and Tatas 3. [Medianama offers a nice at-a-glance graphic that tabulates the effect this judgement will have]

Does it necessarily follow that the government would be caught up in prolonged and protracted litigation with these affected companies, thereby causing uncertainty for subscribers, fresh investors and existing lenders such as banks?

Or would the government, as suggested by the court, be able to work out satisfactory arrangements, under TRAI's revised guidelines, while re-auctioning and allotting licences?

R. Sukumar of the Mint notes:

...because it is likely that some affected telcos will now choose to operate in fewer markets (which means their arrangement with the government will be for fewer licences than they originally had), and because it is also certain that some telcos, the ”really guilty” ones will not be allowed by the government to do anything of the sort, a significant amount of spectrum will become available for existing telcos not affected by the 2G case (think Bharti Airtel for starters). Some of the spectrum is in lucrative markets such as Delhi and Mumbai. Need we say more?

Almost all analysts, including Mr Sukumar, seem to indicate that the judgement is likely to result in rising tariffs -- significantly in the affected markets.

But most importantly, the judgment sets a precedent in para 69, which is bound to prove contentious in the times to come:

When it comes to alienation of scarce natural resources like spectrum etc., the State must always adopt a method of auction by giving wide publicity so that all eligible persons may participate in the process. Any other methodology for disposal of public property and natural resources/national assets is likely to be misused by unscrupulous people who are only interested in garnering maximum financial benefit and have no respect for the constitutional ethos and values.

Clearly, this would apply not just to Spectrum, but also to the other contentious areas such as minerals and mining, and oil and gas.

And, of course, the court also had some words of praise:

Before concluding, we consider it imperative to observe that but for the vigilance of some enlightened citizens who held important constitutional and other positions and discharge their duties in larger public interest and Non Governmental Organisations who have been constantly fighting for clean governance and accountability of the constitutional institutions, unsuspecting citizens and the Nation would never have known how scarce natural resource spared by the Army has been grabbed by those who enjoy money power and who have been able to manipulate the system

[Read the full text of the judgement here]

And Now The Fundoos Target Taslima