'After General Election, I Will Hand The Baton Over To A New PM' 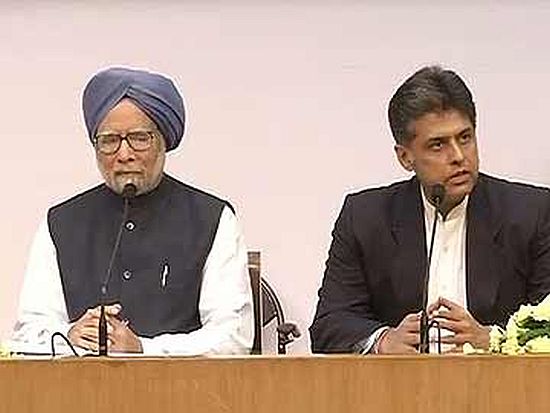 Full text of the PM's address to the press:

First, let me wish you all a very happy New Year.

Let me say at the outset that I do believe we are set for better times. The cycle of global economic growth is turning for the better. Many of the steps we have taken to address our domestic constraints are coming into play. India’s own growth momentum will revive.

An important development in the year that has gone by is the demonstration of the strength of our democracy. Our people have demonstrated their faith in the institutions of democracy by voting in record numbers in the recent assembly elections. My party did not do well in these elections, but we welcome the extent of participation, and we will reflect on what the results tell us for the future and learn lessons.

Our democratic Constitution and the institutions of our democracy are the cornerstone of Modern India.  All of us who wish to build a better India, rid of poverty and corruption, must respect these institutions and work through them.  They are the legitimate instruments in our hands, with all their limitations.  No one individual or authority can substitute for the due processes of democratic governance.

Over the past decade we have been through many ups and downs. During my first term in office, India witnessed for the first time in its recorded history a sudden acceleration of economic growth to 9.0 per cent. This exceptional performance was followed by a slowdown initiated by the global financial crisis. Over the past couple of years, all Emerging Economies have experienced a slowdown. India was no exception.

Economies have ups and downs and we should not focus overly on the short term. We should recognize that even if we include the years of slowdown, the rate of growth achieved in the past nine years, is the highest for any nine year period. And it is not just the acceleration of growth that gives me satisfaction. Equally important is the fact that we made the growth process more socially inclusive than it has ever been.

In 2004 I committed my government to what I said would be “A New Deal for Rural India”. I believe we have delivered on that promise very substantially. We followed farmer friendly policies including raising support prices for farmers, expanding credit to farmers, and through increased investment in horticulture, in rural development, and rural infrastructure, especially roads and electricity. The Mahatma Gandhi National Rural Employment Guarantee Scheme has assured agricultural labour of a floor and has increased their bargaining power. Improved delivery of health and education services is giving new hope to our brothers and sisters living in rural areas of the country.

These initiatives have ensured that agricultural GDP has grown faster than earlier. India has become one of the world’s largest producers of food-grains, sugar, fruits and vegetables, milk and poultry. Rural wages have increased in real terms much faster than earlier.  Rural real consumption per capita has increased four times faster. Because of these developments the percentage of the population below the poverty line has fallen much faster in the period 2004 to 2011 than it did in the previous ten year period. As a result, the number of people below the poverty line has come down by 13.8 crore.

Education has been a key element of our strategy to increase the productive capacity of our economy and improve access to better jobs. I have myself been a beneficiary of liberal scholarships and public investment in education. I can, therefore, well understand the critical importance of investing in education.

I take great pride in the fact that we have transformed the education landscape of our country. Through Sarva Shiksha Abhiyan, through new scholarships for Scheduled Castes, Scheduled Tribes, Other Backward Classes and Minorities, and with a focus on the Girl Child and young women, we have widened educational opportunities. We have set up new universities, new institutes of science and technology, new industrial training centres and enabled the flowering of individual enterprise in skill building and education.

I also feel satisfied with our legislative effort. Despite unprecedented parliamentary holdups, we have passed several important laws that seek to empower our people and our democratic institutions

I do not wish to elaborate on our achievements in the economic arena. These are spelt out in detail a booklet which has been separately distributed and I would be happy to answer questions. There are however three points which I would like to mention.

First, I am concerned that we have not been as successful as we need to be in generating employment in the manufacturing sector. This is an aspect of performance which we are working hard to correct. We need a much stronger effort in support of small and medium enterprises which can be a major source of good quality employment. Our Manufacturing Strategy gives high priority to this objective for the future

Second, we have also not been as successful in controlling persistent inflation as we would have wished. This is primarily because food inflation has increased. However, we should remember that our inclusive policies have put more money in the hands of the weaker sections.

To keep food prices in control we need to increase supplies and also improve marketing arrangements and logistics. This is especially important for items which are perishable, such as fruits and vegetables. Much of this work lies in the domain of the States.

I am happy to say that the Food Security Act that we have passed will to some extent shield the common man from rising food prices.

Third, we are deeply committed to the objective of combating corruption.  An array of historical legislations has been enacted to make the work of the Government transparent and accountable.  Governance has been made more answerable as never before.  Most of you have been routinely using the Right to Information Act to access Government documents which was not possible earlier.

There is much public concern on high profile allegations of corruption, notably in regard to 2G spectrum allocations, coal block allocations and cases related to land. We have taken major steps to change the existing procedures for allocation of spectrum and coal by shifting to auctions so that these problems do not arise in future. Where some decisions taken earlier, when allocations were made administratively, have come under question, they are being investigated. Any wrong doing will be punished through due process of law.

Let me conclude with a few words about the external environment.  The one lesson we shall all learn from our experience over the past decade is that the world around us is becoming more challenging. This is both a function of our greater integration with the world and of the international community’s expectations from a rising India.  This is India’s manifest destiny.  We should recognize it as such and learnt to deal with it.

India will continue to invest in its defence and national security, in providing security to its own people and ensuring regional security and stability. At the same time, we will continue to seek better relations with our immediate neighbours knowing that the destiny of the Indian sub-continent is linked through a shared history and a shared geography.

It has also been my effort to build long term, stable and mutually beneficial relations with all major powers and all our Asian neighbours.   We should continue to benefit from global opportunities and contribute to global efforts in creating and managing global institutions to deal with global challenges.

I have enormous confidence in our people’s ability to deal with challenges at home. In a few months time, after the general election, I will hand the baton over to a new Prime Minister.  I hope it will be a UPA chosen Prime Minister and our party will work to that end in the campaign for the General Elections. I am confident that the new generation of our leaders will also guide this great nation successfully through the uncharted and uncertain waters of global change.

As we enter the New Year we will continue to implement our policies, with vigor and commitment, aiming to revive growth, promote enterprise, generate employment, eliminate poverty and ensure the safety and security of all our people, particularly women and children.  Our Government will work ceaselessly till its last day.

For full press-conference and the Q&A session, please click here: '

The Next Prime Minister Will Be From The UPA Coalition'

A Guard Of Honour For Jacques Kallis