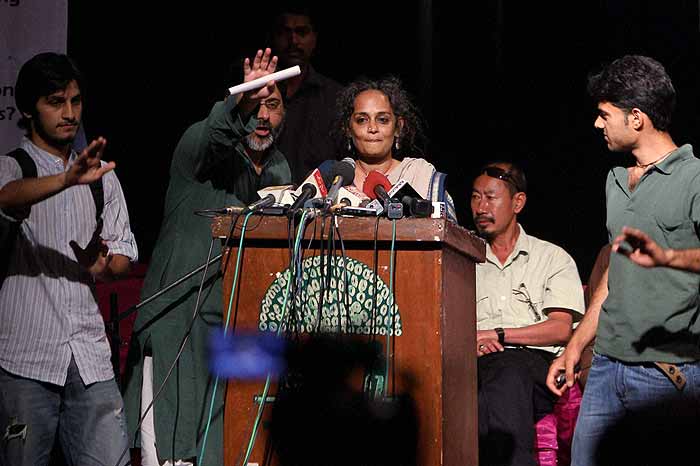 At a seminar on “Azadi-The Only Way” in Delhi on October 21,  Arundhati Roy is reported to have said, inter alia:

“India needs Azadi from Kashmir and Kashmir from India. It is a good debate that has started. We must deepen this conversation and am happy that young people are getting involved for this cause which is their future. Indian Government is a hollow super power and I disassociate with it,” Roy said.

“Earlier we used to talk about our head held high and now we lay prostrate to the US,” she added.

Referring to one of her earlier writings, Roy mentioned that Kashmiris have to decide whether they want to be with or get separated from an India where more than 830 million people live on Rs 20 per day only”.

BJP's Arun Jaitley went ballistic, demanding sedition charges against Roy and Syed Ali Shah Geelani who shared the platform with her, accusing the government of "looking the other way".

Home Minister P. Chidambaram said the uthorities had videographed the entire proceedings of the seminar and had submitted them to the legal advisers for opinion whether there has been a violation of the law.

"If it is established prima facie that the laws have been violated, Delhi police will take action in accordance with the law," he said.

On October 24, in Srinagar, Arundhati Roy repeated the same charge:

"Kashmir has never been an integral part of India. It is an historical fact. Even the Indian Government has accepted this

It seems there was more anger at her for saying that the "Indian state forcibly or deceitfully annexed the North-East, Goa, Junagarh, Telangana, etc" and that it is "an upper caste Hindu state waging a continuing struggle against the people".

Even a Congress leader felt compelled to ask her to withdraw her statement:

"She must withdraw her statement which is contrary to historical facts and could mislead the nation as well as the international community... Roy would do better to brush up her knowledge of history and know that the princely state of Jammu and Kashmir had acceded to the Union of India after its erstwhile ruler Maharaja Hari Singh duly signed the Instrument of Accession on October 26, 1947. And the state, consequently has become as much an integral part of India as all the other erstwhile princely states have."

Since yesterday, there have been reports that while the home ministry had got the legal opinion it had sought to book sedition cases against Roy and Geelani, the home minister was hesitating to ask the police to take action as that would mean arresting Arundhati Roy, something that most observers agree would be the wrong move tactically, as it would result in international attention.

Incidentally, more than one lawyer has cited Kedar Nath vs State of Punjab to point out that a constitution bench of the Supreme Court clarified in 1962 that nothing would be considered sedition unless there was a call for armed revolt or for use of violence, pointing out that it is a clear case of freedom of speech.

Centre's interlocutor for Kashmir, Dilip Padgaonkar, meanwhile, has cautioned against arresting Arundhati Roy or Geelani, pointing out that it would be facilitating the "strategem adopted by such people" as it was exactly what they would want to "gain attention".

“Our response should be that of a mature democracy. It should be based on cool reason and not the kind of emotional outbursts we witnessed," he said, pointing out that it is in the larger interest if people express their views, no matter how extreme they are. “That way, the public gets to know what they stand for and it is good,” he said, adding:

"I think people should realise that their freedom of expression must not be construed by other people as abuse of that freedom. If the lines have been crossed, that is being seen and then whatever action needs to be taken will be taken. But I stand for the freedom of expression for all citizens. There's no case against either as of now, but the issue has already thrown up fundamental questions on the freedom of speech, famously summarised by political philosopher Voltaire, "I disapprove of what you say, but I will defend to the death your right to say it."

Writing in the Pioneer, the same common-sensical view had been articulated by Swapan Dasgupta, a jourmalist considered close to the BJP, as well:

The irony is that a publicity-conscious pamphleteer would love to be prosecuted for sedition and, preferably, even arrested. The spectacle of a small, innocent-looking, soft-spoken woman who is a celebrity in the Noam Chomsky-loving classes in the West being led away by burly, pot-bellied policemen will make for wonderful TV and is calculated to whet the appetites of all who believe that India’s democracy is counterfeit. It will have a global impact and may even bring forth a petition calling for her release signed by the who’s who of the Manhattan establishment. Maybe President Barack Obama will also chip in.

An Arundhati Roy charged with sedition for daring to question India’s ‘occupation’ of Kashmir will be the best thing to have happened to a movement that never quite succeeded in putting the stone throwers on par with the Palestinian intifada. The attempts to transform the disturbances in Kashmir into an international human rights issue has failed mainly because India has too many better things to offer. The last thing we now need is to make Arundhati Roy into India’s Liu Xiaobo and Geelani into the Taliban-loving Amnesty International’s ‘prisoner of conscience’.

Jaitley is right about the law and the Constitution but he is wrong about the political wisdom of prosecuting secessionists for non-violent offences. Geelani routinely makes speeches in Srinagar that are far more provocative than the one he made last Thursday in Delhi. The fact that he made it in Delhi doesn’t worsen the offence. Both Srinagar and Delhi are, after all, in India.

Secessionism has to be countered both militarily and through arguments. An argumentative environment is India’s best advertisement against intolerant Maoism and Islamism.

What do you think?