Bizarre Ad: 'We Featured Him For His Hair, Not Terrorism' 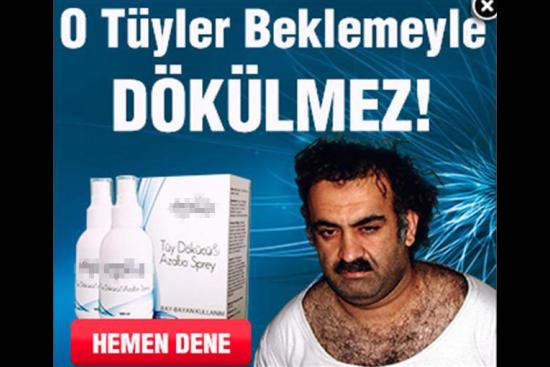 Readers were recently rather startled to see this advertisement featuring a hirsute Khalid Sheikh Mohammed, the former Pakistani former al-Qaeda leader, accused of being the "principal architect" of 9/11, in Hurriyet Daily News, Turkey’s oldest English-language daily.

“Waiting won’t get rid of that hair!” or, more literally, “The hair will not go away because you keep waiting!” said the ad in Turkish.

In its defence, the Turkish cosmetics company which used his photograph in an ad for hair removal products pleads that it featured the notorious al-Qaeda terrorist “for his hair, not terrorism.”

“We didn’t know that he was a terrorist. This image is in popular use in Turkish memes on the Internet. The guy is quite hairy, so we thought his body was a good fit for our ad,” Mehmet Can Y?ld?z, a representative for the cosmetics company, told Hürriyet via phone on Nov. 4.

Y?ld?z told Hurriyet that the company had discovered the image on ?nci Sözlük, a Turkish online social community website.

“We didn’t want to imply anything political. We didn’t know that it could become an international story. I repeat: We featured him for his hair, not terrorism,” Y?ld?z said.

The story about the ad circulated on Twitter and finally made it on Vox on Nov. 1.