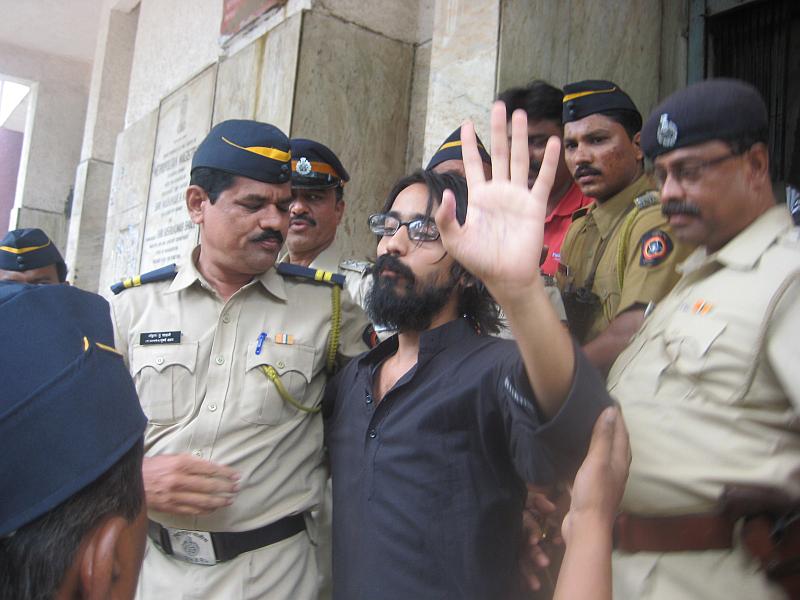 Brief facts of the case

Those who have spoken out against the arrest include:

There is an online petition demanding his immediate release which points out:

Slapping Sec 124a sedition on Aseem is absolutely unacceptable . Aseem’s cartoons are clearly not an attempt to co-opt national symbols for a commercial venture. In the language of the law, they do not tend to create an impression that they relate to the Government or that they are official documents of the Government. Aseem’s cartoons are indictments of the pervasive corruption in the corridors of India’s Parliament. And that’s political speech worthy of a great democracy’s protection. [Also read: more on Sedition]

And finally, Justice (Retd) Markandey Katju has spoken out, pointing out that the very arrest is illegal:

My opinion is that the cartoonist did nothing illegal. In a democracy many things are said, some truthful and others false. I often used to say in Court when I was a Judge that people can call me a fool or crook inside Court or outside but I will never take contempt of court proceedings, because either the allegation is true, in which case I deserve it, or it is false, in which case I will ignore it. These are occupational hazards, and politicians , like Judges, must learn to put up with them.

In fact arresting a cartooniist or any other person who has not committed a crime is itself a crime  under the Indian Penal Code called wrongful arrest and wrongful confinement.

So policemen who make such illegal arrests cannot take the plea that they were obeying orders of political superiors. In the Nuremberg trials thr Nazi War Criminals took the plea that orders are orders, and that they were only obeying the orders of their political superior Hitler but this plea was rejected by the International Tribunal which held that illegal orders should be disobeyed.

Shivam Vij spoke to Amit Katarnawre, 27, one of the main complainants, for rediff:

Katarnawre is an employee of Central Railway and a Dalit. He says he is not a member of any political party but is ideologically an Ambedkarite who could not stand the Constitution being desecrated. He said Trivedi should be interrogated to ascertain the role of all members of Team Anna in the display of the cartoons at the MMRDA grounds.