Celebrate Dharmendra’s Passion For Cinema At 83, Rest Is Immaterial

Dharmendra has never been as methodical as Bachchan in his career. He has often chosen his movies because of his personal relationships and paid the price for paying heed to his heart and not his mind. 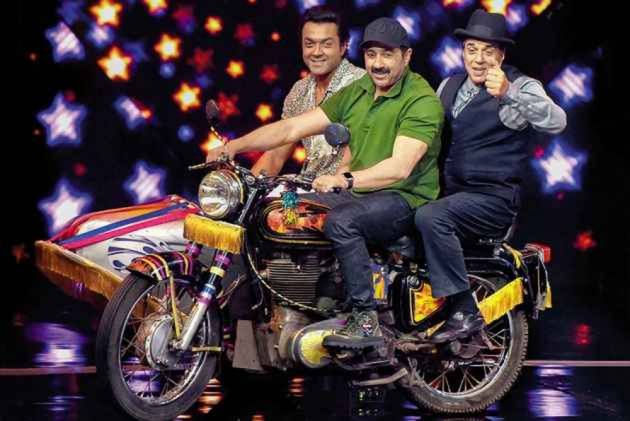 Yamla Pagla Deewana Phir Se (YPDPS) has turned out to be a damp squib and it is not all that unexpected in the first place. Given the way the audience had rejected its immediate prequel in 2013, it’s not at all surprising to see the latest (mis)adventure of the Deols biting the dust at the turnstiles.

Still, this movie should be celebrated for the sheer presence of Dharmendra, if not for anything else. If only we could stop evaluating his movies merely in terms of commercial returns, we would be able to cherish one of the most loved stars of all times, who has retained his unflagging zeal and passion for cinema at his age, and this juncture of his career.

His latest venture, of course, is eminently forgettable, with a thin storyline and sloppy screenplay, the sort of stuff a millennial viewer is loath to watch today. But barely three months short of his 84th birthday, it gives us a glimpse of Dharmendra’s never-say-die spirit, joie de vivre and an unflinching faith in Hindi cinema.

Let trade analysts snigger that the third franchise of the Deols’ Yamla Pagla Deewana (2010) could not even collect Rs 10 crore in its first week, but that does not make Dharmendra any lesser star. There are many, including his die-hard admirers, who would now like him to lead a retired life at his farmhouse, instead of having to don the greasepaint and face the arc-lights under trying circumstances.

But then, hits and flops are an integral part of an actor who has lasted 58 years in the industry. It would be naïve to compare his latest film with the new release of any other star. And it would also be puerile to suggest, merely on the basis of the disastrous performance of his film, that he should hang up his boots.

True, Dharmendra looks a pale shadow of his former self on screen, old and frail. If you have grown up watching him in his prime, when he looked like a veritable Greek God with drop-dead gorgeous looks, you would surely be unhappy about what the vagaries of time can do to the best of us. But if you know Dharmendra, you would appreciate as to why it is so important for an actor like him to carry on, regardless of the adverse box office verdict.

In fact, Dharmendra is pretty much like Dev Anand in this regard -- indefatigable and undeterred by commercial failures. He is no longer doing it for money, but for his unbridled love for cinema -- just like Dev Anand. For years before his death, the evergreen star-founder of Navketan studios could not deliver a hit; his last big success Des Pardes (1978) had come 33 years before his demise, to be precise. But he kept the passion for acting and film-making alive all through his life, churning out movies at regular intervals until he passed away in London at the age of 88 in 2011, probably with a copy of the script of his next film under his pillow.

Like Dev Anand, Dharmendra belongs to a rare breed of actors who do not join the film industry to mint money and build a parallel empire. Had Dev Anand wanted, he could have invested time and money in a parallel business, and spend a cosy retired life in his twilight years. But he chose to think of fresh stories, hunt for young talents, and make movies which he always wanted to. Dharmendra, too, has a similar passion for cinema; he too apparently cannot visualise himself leading a life like a recluse, detached from an industry he loves so much, as also from the millions of people who have always showered their love on him for decades.

Stars like Dharmendra do not fail just because their movies flop miserably. The only thing that he needs to be careful about is the kind of scripts he chooses now. One hopes that he would take a cue from Amitabh Bachchan, who has set a template for senior artistes as far as selection of good roles is concerned. At 75, his Sholay co-star still picks the right scripts, which do absolute justice to his image, stature and age.

But then, we all know that Dharmendra has never been as methodical as Bachchan in his career. He has always chosen his movies randomly -- often only because of his personal relationships -- and paid the price for paying heed to his heart and not his mind. And yet, he has enjoyed every moment of the making of all his movies. This is what makes him a quintessential cinema man in a true sense, regardless of the success or failure of his recent movies. Let us celebrate that!