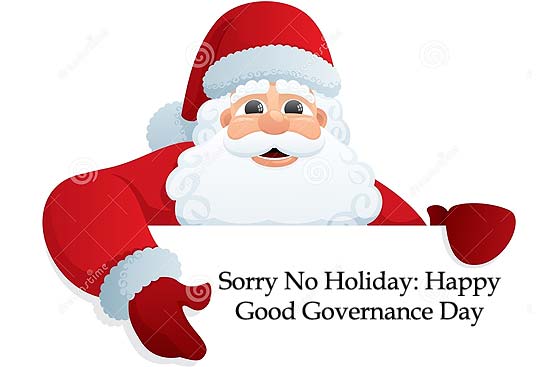 First came the news in Times of India that the CBSE schools may have to remain open on this Christmas:

If the Union government has its way, CBSE schools may have to remain open on this Christmas.

Although CBSE has not communicated this to its affiliated schools yet, the Union government-run Navodaya Vidyalays have issued a circular to their schools. The Navodaya schools operate in rural areas on the lines of Kendriya Vidyalayas, and are affiliated to CBSE. The Navodaya circular says CBSE will be organizing an essay competition on December 24 and 25, the topics for which will be declared on December 23.

Then came the denials from the HRD minister:

Dear @timesofindia deliberate mischief by ur reporter on the front page today. All schools closed for XMas, essay competition only online.

Dear @timesofindia I wish this reporter had the decency to at least check with people frm TOI who cover d HRD beat.... (1/3)

... Or for that matter verify d same with Secretary School Education, unless the idea was to deliberately misreport. (2/3)

.. @timesofindia if truth is a virtue u cherish can I c a retraction tomorrow on the front page in bold (3/3)

Dear @timesofindia even the essay competition online is VOLUNTARY.

In Rajya Sabha, the finance minister quoted the HRD minister:

HRD Minister Smriti Irani "has informed me that no such instruction has been issued, no school will function (that day). Only an online essay competition (is being organised). That's all," Jaitley said.

But a perusal of the letter by G.S. Bothyal, Commissioner, Navodalya Vidyalaya Samiti's letter F.No. 33-2/2014-NVS (Acad) makes it clear that more than an online essay competition was being suggested for Navodaya schools: