'Dear Mother, I Don't Want To Rot Under The Soil' 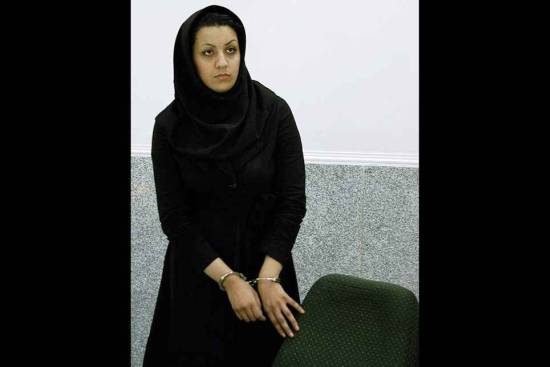 Reyhaneh Jabbari, 26, hanged in Iran on Saturday, October 25, on charges of killing a man she said tried to rape her, sent a final message to her mother in April, asking her to make sure her organs would be donated.

I don’t want to rot under the soil.

I don’t want my eye or my young heart to turn into dust.

Beg so that it is arranged that as soon as I am hanged my heart, kidney, eye, bones and anything that can be transplanted be taken away from my body and given to someone who needs them as a gift.

I don’t want the recipient know my name, buy me a bouquet, or even pray for me.

I am telling you from the bottom of my heart that I don’t want to have a grave for you to come and mourn there and suffer.

I don’t want you to wear black clothing for me. Do your best to forget my difficult days.

Give me to the wind to take away.

Iranian activists distributed a translation of the voice message she recorded for her mother in April, after being on death row for five years.

She had been in prison since 2007 for allegedly murdering Morteza Abdolali Sarbandi, a former employee of Iran’s Ministry of Intelligence who she said tried to sexually abuse her, and the verdict was upheld by Iran’s Supreme Court despite a legal challenge.

Reyhaneh Jabbari was just 19 in 2007, working as an interior decorator, when she met Morteza Abdolali Sarbandi. in a cafe, who convinced her to visit his office to discuss a business deal.

While at the office, Sarbandi allegedly tried to rape Jabbari and, in the prosecution version of the sequence of events, the latter grabbed a pocket knife and stabbed him.

United Nation's human rights rapporteur in Iran, Ahmed Shaheed, maintains that Jabbari was hired by Sarbandi to redesign his office, who took her to an apartment where she was sexually abused by him.

According to Amnesty International, Jabbari had admitted stabbing Sarbandi, but had claimed that someone else in the house had killed him.

Sarbandi's family insists that the murder was premeditated as Jabbari confessed to buying a knife two days before the killing.

In her message, Jabbari said she believed she would have been murdered that night if she had not fought back.

After her arrest, Jabbari was kept in solitary confinement for two months, without access to her family or a lawyer.

She was sentenced to death by a Tehran court in 2009.

Her punishment was postponed from the original April 2014 date after a global campaign to stop her execution attracted over 2,42,000 signatures.

The full text of the translation of Reyhaneh Jabbari's voice message to her mother  (Translated by National Council of Resistance of Iran—NCRI):

Dear Sholeh, today I learned that it is now my turn to face Qisas (the Iranian regime's law of retribution). I am hurt as to why you did not let me know yourself that I have reached the last page of the book of my life. Don’t you think that I should know? You know how ashamed I am that you are sad. Why did you not take the chance for me to kiss your hand and that of dad?

However, with that cursed blow the story changed. My body was not thrown aside, but into the grave of Evin Prison and its solitary wards, and now the grave-like prison of Shahr-e Ray. But give in to the fate and don’t complain. You know better that death is not the end of life.

You taught me that one comes to this world to gain an experience and learn a lesson and with each birth a responsibility is put on one’s shoulder. I learned that sometimes one has to fight. I do remember when you told me that the carriage man protested the man who was flogging me, but the flogger hit the lash on his head and face that ultimately led to his death. You told me that for creating a value one should persevere even if one dies.

You taught us that as we go to school one should be a lady in face of the quarrels and complaints. Do you remember how much you underlined the way we behave? Your experience was incorrect. When this incident happened, my teachings did not help me. Being presented in court made me appear as a cold-blooded murderer and a ruthless criminal. I shed no tears. I did not beg. I did not cry my head off since I trusted the law.

But I was charged with being indifferent in face of a crime. You see, I didn’t even kill the mosquitoes and I threw away the cockroaches by taking them by their antennas. Now I have become a premeditated murderer. My treatment of the animals was interpreted as being inclined to be a boy and the judge didn’t even trouble himself to look at the fact that at the time of the incident I had long and polished nails.

How optimistic was he who expected justice from the judges! He never questioned the fact that my hands are not coarse like those of a sportswoman, especially a boxer. And this country that you planted its love in me never wanted me and no one supported me when under the blows of the interrogator I was crying out and I was hearing the most vulgar terms. When I shed the last sign of beauty from myself by shaving my hair I was rewarded: 11 days in solitary.

Dear Sholeh, don’t cry for what you are hearing. On the first day that in the police office an old unmarried agent hurt me for my nails I understood that beauty is not looked for in this era. The beauty of looks, beauty of thoughts and wishes, a beautiful handwriting, beauty of the eyes and vision, and even beauty of a nice voice.

My dear mother, my ideology has changed and you are not responsible for it. My words are unending and I gave it all to someone so that when I am executed without your presence and knowledge, it would be given to you. I left you much handwritten material as my heritage.

However, before my death I want something from you, that you have to provide for me with all your might and in any way that you can. In fact this is the only thing I want from this world, this country and you. I know you need time for this. Therefore, I am telling you part of my will sooner. Please don’t cry and listen. I want you to go to the court and tell them my request. I cannot write such a letter from inside the prison that would be approved by the head of prison; so once again you have to suffer because of me. It is the only thing that if even you beg for it I would not become upset although I have told you many times not to beg to save me from being executed.

My kind mother, dear Sholeh, the one more dear to me than my life, I don’t want to rot under the soil. I don’t want my eye or my young heart to turn into dust. Beg so that it is arranged that as soon as I am hanged my heart, kidney, eye, bones and anything that can be transplanted be taken away from my body and given to someone who needs them as a gift. I don’t want the recipient know my name, buy me a bouquet, or even pray for me. I am telling you from the bottom of my heart that I don’t want to have a grave for you to come and mourn there and suffer. I don’t want you to wear black clothing for me. Do your best to forget my difficult days. Give me to the wind to take away.

The world did not love us. It did not want my fate. And now I am giving in to it and embrace the death. Because in the court of God I will charge the inspectors, I will charge inspector Shamlou, I will charge judge, and the judges of country’s Supreme Court that beat me up when I was awake and did not refrain from harassing me. In the court of the creator I will charge Dr. Farvandi, I will charge Qassem Shabani and all those that out of ignorance or with their lies wronged me and trampled on my rights and didn’t pay heed to the fact that sometimes what appears as reality is different from it.