Deewar And Sholay Dialogues In Sanskrit... And The Obligatory Gujarat Angle 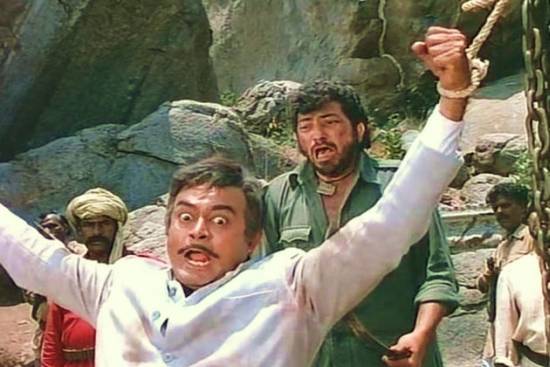 As serious journalists, we go by the following two dictums:

While puzzling over why Sanskrit was being brought back to the Kendriya Vidyalayas in place of German, and why it could go on to replace English as a link language, our intrepid reporters decided not to be disturbed by the phenomenon that has recently come to be characterised as 'extraneous noise' and instead to go back to the basics.

We should mention that the corollary to the second dictum of course is that we have been trained to type out what we are looking for in the search field of, what Justice Katju used to quote from and memorably call in many of his learned judgements as, the "website Google."

No, no, gentle readers, we did not go looking for a Gujarat angle; it was just a serendipitous find.

It was with this spirit of enquiry that we proceeded to do just that and are pleased to share the initial findings of our preliminary Google and Youtubesearch research:

Exhibit 2: Lest you think the above video is just a spoof, well, here's a Press Trust Of India report of a month prior to the above being put up on Youtube, it's an Ahmedabad datelined story on September 9, 2009, pointing out that an Ahmedabad-based academy was doing to popularise Sanskrit:

As part of the project, the Eklavya Sanskrit Academy (ESA) translated some portions of popular dialogues like the one of Gabbar Singh in Sholay to teach people to speak in Sanskrit.

Academy director Mihir Upadhyay said: "We want to show people that Sanskrit is an easy and interesting language. To popularise Sanskrit, we recently did an experiment by using dialogues of around 17 super-hit Hindi films to attract people, mainly youths."

The story goes on to provide the following examples as well.

which translates in Sanskrit to:

Or the often-quoted dialogue from the film Deewar:

which is translated in Sanskrit as:

Yes, we totally agree that cause and effect are not exactly our strong points, and we tend to be rather dismissive of ersatz concepts such as Occam's Razor, but gentle reader, we hope that you would enjoy the following as well:

Exhibit 5: Fittingly, therefore, it was none other than Mr Amitabh Bachchan himself, who acted in both these movies, and who recently shared the following in a Facebook post:

Exhibit 6: That Mr Bachchan happens also to be a brand ambassador for the state of Gujarat, we are sure, is just an interesting, if irrelevant, detail that we cannot help but mention, just for your consideration.