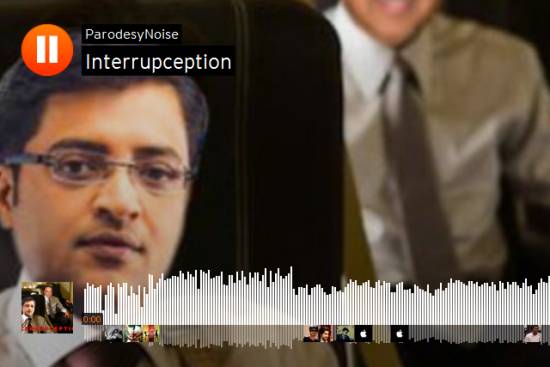 Those who have followed the life and times of Mr Arnab Goswami and Dr Subramanian Swamy would know that no caricature, no parody can quite capture the full essence of their genius.

But those who have followed the life and times of Harish Ravindran (@hariflute) Krish Ashok (@krishashok) and Vijaya Thesingu Rajendar, working together as Parodesy Noise—"a parody band with 3 members. 2 in flesh (non-veg) and 1 in spirit (alcohol)"—would also know that they have the genius it takes to express the ineffable and capture the very essence even of those phenomenon where experts are left floundering, while repeatedly,  incoherently, muttering imprecations and French expressions such as "je ne sais quoi."

This is what they have come up with:

And this is how they sum up their latest work of art:

Arnab Goswami is a man of depth. He unleashes rationality and factuality by assembling 5-6 experts and interrupting them at every step. Subramaniam Swamy is a professional Dream Stealer whose task is to infiltrate the subconscious realm of Arnab's own kingdom and interrupt the interruptor, name-call the name-caller and implant the idea that it is possible to reduce prime time news to even more unimaginable depths.

To capture the essence of his genius, we have adapted Hans Zimmer's Time from Inception.

The source material is largely from this - http://www.youtube.com/watch?v=FykqCkDDrW0

For those who like to get some perspective, the November 4 debate titled, "#IsSwamyRight or Wrong?" on Times Now was about the recent death penalty awarded  to five Tamil Nadu fishermen by a Sri Lankan court, allegedly for heroin trafficking in their country in the year 2011.

"In Sri Lanka, people who support terrorism are pardoned. Drug trafficking does not result in death. It is only in this case, that also on the basis of flimsy unsubstantiated evidence and absolute fiction that the Sri Lankans are accusing 5 fishermen of drug trafficking," the Nation's Conscience Keeper thundered, omitting to point out the minor detail that three Sri Lankans had also been sentenced to death by the Lankan court.

"Does Swamy have the guts to say that Sri Lankan Government is saying lies? Why doesn't Swamy write a letter to Rajapaksa saying that he is a liar? Are you scared that your relationship with Rajapaksa will be strained? Is your relation more important than the lives of 5 fishermen?" he accused.

Now, Dr Swamy, in addition to his many admirable qualities, also has a Twitter bio that reads,

A short succinct commentary in two Tweets was provided by the ever insightful Mihir Sharma:

Still laughing. (part 2 of Swamy v Arnab.) Congress guy at right has a smile that says "5 years of this? Fun!" http://t.co/XKLp3i9aox

Regular readers would recall that Mr Goswami had last year given us such sublime hit duets as the one with Mr Abhijit Mukherjee and Ms Meenakshi Lekhi.

Earlier this year, Raka Ashok and TVF had also given us an Aam Aadmi Electro Mix