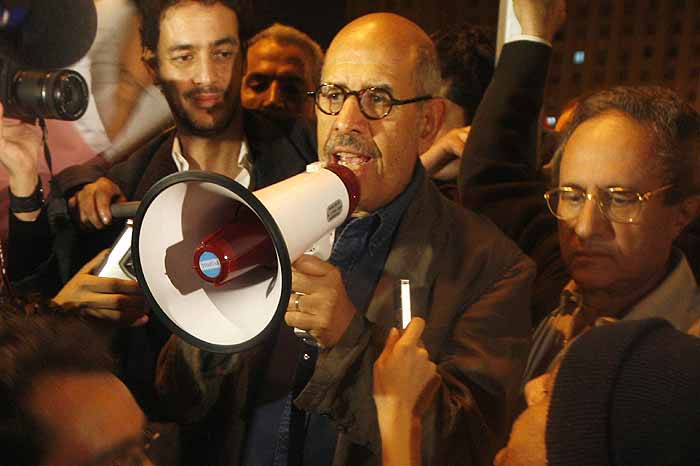 On Sunday, the demonstrators -- that include a largely secular Kifaya ("Enough"), April 6 Youth movements and the Muslim Brotherhood (MB) -- selected a 10-man committee  to negotiate with the government for a peaceful transition of power, with the MB agreeing to support Mohamed Elbaradei, the former head of the International Atomic Energy Agency, for the post of  president. As Egypt prepares for its ‘million-person march’ on Tuesday with the aim of toppling the Mubarak government, it is perhaps time for some back-ground reading on the country:

As recently as last July, the Economist''s Max Rodenbeck insisted that change was in the air:

Predictions of change in Egypt have almost always proved wrong; generally it bumbles along much as usual. This time may just be different. The country now faces three main possibilities. It could go the way of Russia and be ruled by a new strongman from within the system. It might, just possibly, go the way of Iran, and see that system swept away in anger. Or it could go the way of Turkey, and evolve into something less brittle and happier for all concerned.

The same report also had this joke that now seems prescient:

A popular joke reveals much about Egypt’s current state of mind. God is reading a newspaper when it suddenly strikes him that Hosni Mubarak has been at Egypt’s helm for nearly three decades. He instructs the archangel Gabriel to go down and tell the president that it is time for him to take leave of his people. “Oh really?” says Mr Mubarak, completely unfazed. “Where are they going?”

The president has a point. His people are moving, slowly but inexorably. Thanks largely to him, only God knows where.

In the LRB, 27 May 2010: Mubarak's Last Breath provided the recent background with the USA:

From 2003 to 2005, the Bush administration appeared to be serious about democratic reform in Egypt: the ‘freedom deficit’ was seen as a key reason for the frustration and anger of men such as Mohammed Atta and Ayman Zawahiri – both Egyptians. Condoleezza Rice called for an end to the Emergency Law at the American University of Cairo in 2005 and, in his 2005 State of the Union address, Bush declared that ‘the great and proud nation of Egypt, which showed the way toward peace in the Middle East, can now show the way toward democracy.’ While continuing to avail themselves of Egypt’s services in extraordinary renditions, Bush and Rice embarked on a ‘freedom agenda’: for the first time, Egyptian NGOs which hadn’t been approved by the authorities in Cairo received direct US grants, infuriating Mubarak. The US was chastened, however, by the Muslim Brothers’ success in the 2005 legislative elections. And that was just the beginning. With Hamas’s election in 2006, resistance and sectarian conflict in Iraq, the spread of Iranian influence, and Hizbullah’s strong performance in the 2006 war with Israel, it was clear that the ‘freedom agenda’ was backfiring in the rest of the region. Suddenly, the promotion of reform in Egypt came to seem imprudent, and Washington remembered why it had always appreciated Mubarak: his co-operation in the Israeli-Palestinian theatre and the war on terror; his hostility to Tehran; the precedence given to US warships seeking expedited passage through the Suez Canal; the willingness to allow American planes to refuel in secret at the West Cairo airbase on their way back to Iraq.

...Barack Obama, keen to break with Bush’s messianic talk about spreading democracy, has worked to rebuild trust with the Egyptian government. In his speech in Cairo in June 2009, he spoke of his belief that all people want ‘government that is transparent and doesn’t steal from the people’, and insisted that ‘we will support them everywhere.’ Yet he has done little more than express mild criticism of Mubarak for extending the Emergency Law, and his administration has reverted to the pre-2004 position of reserving USAID funds for NGOs approved by the Egyptians.

Helena Cobban in the Foreign Policy profiles The men of Qasr el-Aini Street, describing her meeting with a key leader of the Muslim Brotherhood's more "liberal" wing, Dr. Abdel Monem Abul-Futouh, a member of the  ruling Guidance Council of the MB who told her then, way back in 2007:

The fear here is a popular explosion -- not controlled by us, or by anyone. This is a very dangerous prospect that may come about if the regime doesn't stop its oppression and move toward more political inclusion. We'd like to have cooperation with the regime, and with all the forces in society. The system here should be made more democratic. The regime should take true steps towards democracy. We understand they can't do it overnight, but they should do it with a clear timetable. They should take true steps against corruption. And work for the true inclusion of all the peaceful political trends here -- the Muslim Brotherhood, the Communists, everyone.

After noting the MB's behaviour ("its people have not thus far been shouting religious slogans, raising religious banners, or openly expressing anti-U.S. or even anti-Israeli sentiment") she concludes:

One key change the Obama administration needs to make as it reassesses its policy towards Egypt is to lift the longstanding ban on U.S. diplomats meeting with representatives of this movement. If they still know how to listen, they would learn a lot.

More on some of the dramatis personae: