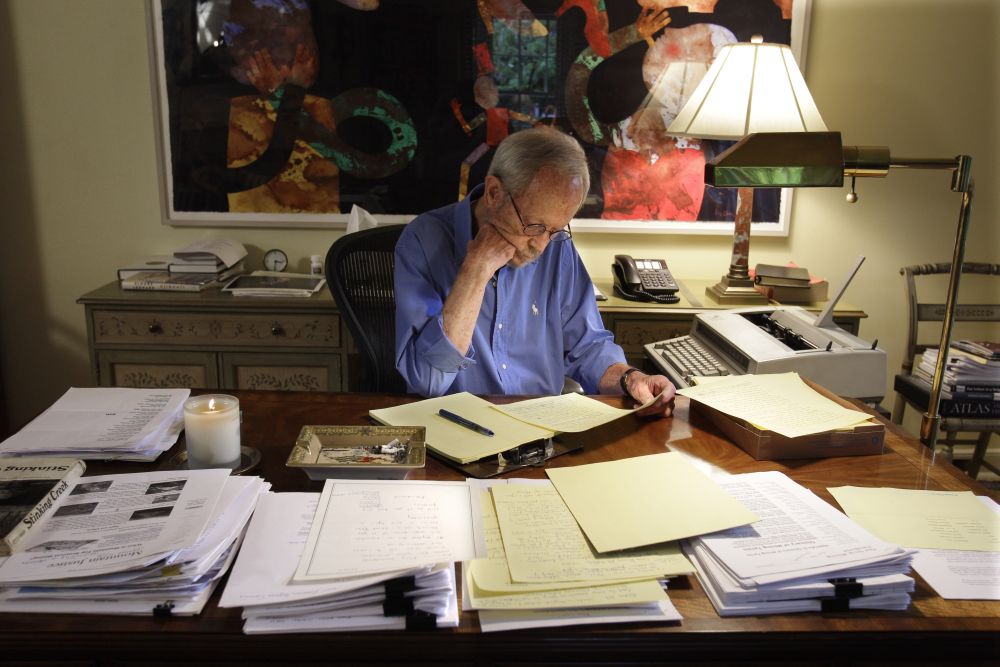 Janet Maslin in the NYT: Elmore Leonard: A Man of Few, Yet Perfect, Words:

Mr. Leonard, who died [last] Tuesday, will forever be admired for the sheer irresistibility of the stories he told. But his legacy is much larger. He was the most influential, widely imitated crime writer of his era, and his career was a long one: more than 60 years.

After he had worked in advertising long enough to learn to appreciate brevity and catchiness, he began writing pulp westerns. They weren’t that different from the crime books that would come later. The talk was tight and crisp, the action even more so, though Mr. Leonard also kept readers slightly off balance.

“You or somebody else,” Valdez replies. “It doesn’t matter.”

Mr. Leonard’s books did most of their work through dialogue, some of it hard-boiled, some delectably funny. Either way, the syntax was contagious, to the point where Mr. Leonard’s writing voice echoes every time another crime writer drops a subject or pronoun, links unrelated clauses with just a comma.

Martin Amis called attention to Mr. Leonard’s much-copied use of the present participle: “Warren Ganz, living up in Manalapan” was his way of saying “Warren Ganz lived up in Manalapan.” Just as distinctive were his capsule descriptions, like this one from “Djibouti,” about Somali pirates: “They on the sauce gettin millions for their ransom notes.”

Read on at the NYT: Elmore Leonard: A Man of Few, Yet Perfect, Words

And, of course, we have his Ten Rules of Writing:

1 Never open a book with weather. If it's only to create atmosphere, and not a charac­ter's reaction to the weather, you don't want to go on too long. The reader is apt to leaf ahead look­ing for people. There are exceptions. If you happen to be Barry Lopez, who has more ways than an Eskimo to describe ice and snow in his book Arctic Dreams, you can do all the weather reporting you want.

2 Avoid prologues: they can be annoying, especially a prologue following an introduction that comes after a foreword. But these are ordinarily found in non-fiction. A prologue in a novel is backstory, and you can drop it in anywhere you want. There is a prologue in John Steinbeck's Sweet Thursday, but it's OK because a character in the book makes the point of what my rules are all about. He says: "I like a lot of talk in a book and I don't like to have nobody tell me what the guy that's talking looks like. I want to figure out what he looks like from the way he talks."

3 Never use a verb other than "said" to carry dialogue. The line of dialogue belongs to the character; the verb is the writer sticking his nose in. But "said" is far less intrusive than "grumbled", "gasped", "cautioned", "lied". I once noticed Mary McCarthy ending a line of dialogue with "she asseverated" and had to stop reading and go to the dictionary.

4 Never use an adverb to modify the verb "said" ... he admonished gravely. To use an adverb this way (or almost any way) is a mortal sin. The writer is now exposing himself in earnest, using a word that distracts and can interrupt the rhythm of the exchange. I have a character in one of my books tell how she used to write historical romances "full of rape and adverbs".

5 Keep your exclamation points under control. You are allowed no more than two or three per 100,000 words of prose. If you have the knack of playing with exclaimers the way Tom Wolfe does, you can throw them in by the handful.

6 Never use the words "suddenly" or "all hell broke loose". This rule doesn't require an explanation. I have noticed that writers who use "suddenly" tend to exercise less control in the application of exclamation points.

7 Use regional dialect, patois, sparingly. Once you start spelling words in dialogue phonetically and loading the page with apos­trophes, you won't be able to stop. Notice the way Annie Proulx captures the flavour of Wyoming voices in her book of short stories Close Range.

8 Avoid detailed descriptions of characters, which Steinbeck covered. In Ernest Hemingway's "Hills Like White Elephants", what do the "American and the girl with him" look like? "She had taken off her hat and put it on the table." That's the only reference to a physical description in the story.

9 Don't go into great detail describing places and things, unless you're Margaret Atwood and can paint scenes with language. You don't want descriptions that bring the action, the flow of the story, to a standstill.

10 Try to leave out the part that readers tend to skip. Think of what you skip reading a novel: thick paragraphs of prose you can see have too many words in them.

And that was something he would repeat often:

“The one thing Leonard won't tolerate is fancy prose. As he states in his 10 Rules of Writing: "If it sounds like writing, I rewrite it.”

“I can't allow what we learned in English composition to disrupt the sound and rhythm of the narrative.”

“I won't read a book that starts with a description of the weather. I don't read books over 300 pages, though I'll make an exception for Don Delillo.”

“I started out of course with Hemingway when I learned how to write. Until I realized Hemingway doesn't have a sense of humour. He never has anything funny in his stories.”

The FAQ on his official website is quite a good introduction to the man:

“How do I get an agent?”
My advice is to learn how to write and the agent will find you.

“Have you ever been in prison?”

No. I’ve been asked. Inmates of various prisons have written and asked me how do I know about their mindset, how do I seem to know so much about their lives or prison life. I listen, I study, I talk to convicts, and I do my homework.

“Do you use a word processor?”
No. I use a pen. I have been using a pen now for nearly 50 years. It seems to work ok. I do have an electric typewriter which I bought five years ago which I use each day. Everything is created in longhand. I put it on the typewriter as I do a page or two or three. It has to be on the typewriter to see what it looks like.

“What is the secret to your writing success?”
My purpose is to entertain and please myself. I feel that if I am entertained, then there will be enough other readers who will be entertained too.

“Why don’t you write screenplays anymore?”
Because it’s work. Because you are an employee working for not just one person, but often several. Everybody has something to say about the script. I don’t write with other writers. I have to be on my own. It can be no other way. I have to maintain my sound.

“Are you involved in the website?”
No, My researcher, Gregg Sutter, is doing the site. We talk about it from time to time, but I wouldn’t say that I am involved.
I don’t own a computer, so I don’t send or receive e-mail

“How long did it take to develop your sound?”
Ten years. It took about ten years before my sound emerged. That’s about a million words

“What is your favourite book? ”
Tishomingo Blues. I had the most fun writing it. Before that is was Freaky Deaky

“What is your favourite western?”
Valdez is Coming.

“You’ve said that you were most happy with three movies made from your work: Which is your favourite?
I can’t chose. Get Shorty was the first film that “got it.” It demonstrated that you could deliver “funny” lines in a movie without reaction, without the character knowing he or she was being funny. It really worked. Jackie Brown came next and stuck very close to the book, Rum Punch, and had my sound, but left plenty of room for Quentin to do his thing. Finally, Out of Sight had Steven Soderbergh’s look but it sounded like me.

Are you a mystery writer?
Not in the strictest use of the term, no. There is never a mystery in my books in my plots. There are not whodunits. The reader knows as much as I do. The reader knows more than the main character does. I’m not interested in mystery. I do write crime novels. There is always a crime in my novels

Why is “The Ambassador” not listed in your fimography?
Monahem Golan hired me to adapt my novel, Fifty Two Pickup and set it in Tel Aviv. I wrote two drafts and then told him to get another writer. He did and the result was The Ambassador which has nothing to do with Fifty-Two Pickup. It has none of my characters, none of my situations, nothing. But he still owed me for the screen rights and had to pay up before he could release the picture.

Some other bon mots:

“And she thought if you don't have the desire to fight or wait for something there's no reason for being on earth.”

It doesn't have to make sense, it just has to sound like it does.”

“You never know what somebody might tell you,' Chris said, 'when they think you're somebody else.”

“I spent most of my dough on booze, broads and boats and the rest I wasted.”
? LaBrava

“There’s something happening here, I know it. It’s right in front of my face, but I just can’t see it.”

“There were a lot of terms you had to learn, as opposed to the shylock business where all you had to know how to say was 'Give me the fuckin money.”

“I always felt, you don’t have a good time doin crime, you may as well find a job.”

The shots left a hard ringing sound within the closeness of the brick walls. Terry held the pistol at arm's length on a level with his eyes—the Russian Tokarev resembling an old-model Colt .45, big and heavy—and made the sign of the cross with it over the dead. He said, "Rest in peace, motherfuckers," turned, and walked out of the beer lady's house to wait at the side of the road.”

“You know what people who go to nude beaches look like?"

"Is Chili Palmer joining the tour?'

About a minute went by. Now he heard Nick saying, "Tell him if he goes near Chili Palmer I'll see that he suffers excruciating pain and will never fucking walk again in his life."

And, then Robin's voice: "Nick said to tell you that if you go near Chili Palmer he'll have your legs broken."

"He reads, but the wrong books.”

'A Political Victory For The UPA'