A Minefield Of Mediocre Films, 1990s Have Little To Offer To Nostalgic Bollywood Stars

Of all its decades, 1990s do appear to be replete with run-of-the-mill movies, with least number of all-time classics. It is amply illustrated by the fact that most of the favourite films chosen by the stars are in the range of mediocre-to-above average category, writes Giridhar Jha. 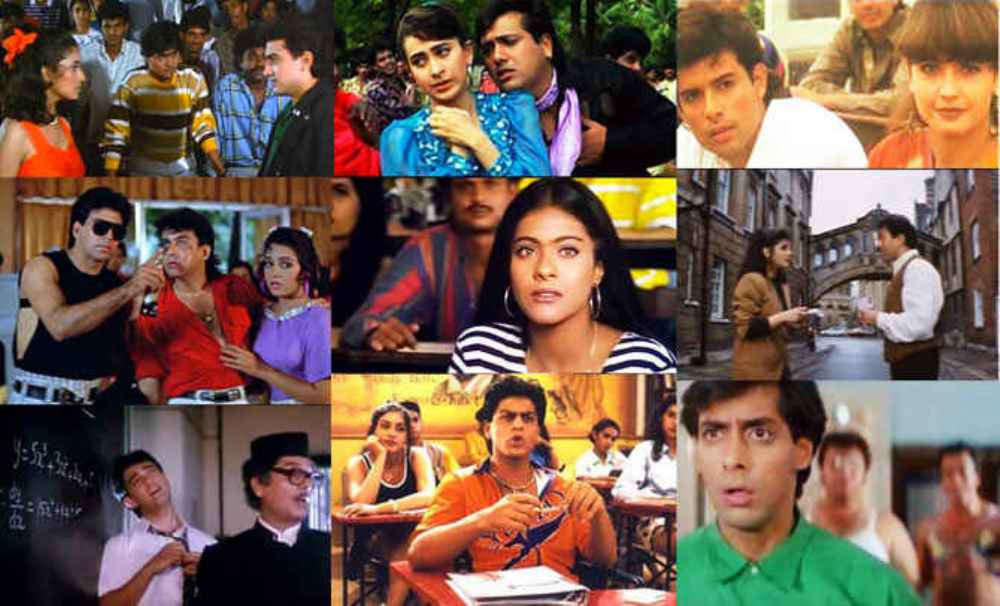 First up, what’s your favourite ’90s movie? Respond with #90sLove, #BackToThe90s or #90sNostalgia and tag five friends to continue the conversation. And look who’s kicking it off – ’90s sweetheart herself @itsKajolD!

Ever since Twitter India set up a task for the celebrities with this message earlier this week, many Bollywood stars -- from A-listers to the newest kid on the block -– have been on a trip down memory lane to pick up their favourite movies from the nineties. Nothing unusual about it in times of extended lockdowns, one might say, except for the fact it has unintentionally ended up exposing the decade as being the worst-ever in the annals of Hindi cinema.

Over the years, film historians sought to dismiss 1980s rather disdainfully as the worst in terms of quality despite film-makers such as Shyam Benegal, Saeed Mirza, Govind Nihlani, Mahesh Bhatt, Sai Paranjape, Ketan Mehta and several others of their ilk delivering some of their best in that period. But a cursory look at the movies released in the final decade of the 20th century makes it clear that it was 1990s, not the 1980s, which deserved the dubious distinction.

Whether you like a movie or not is indeed a subjective matter. There cannot be one yardstick to judge cinema. The best possible way to weigh the merit of a film is to see whether it stands the test of the time. A classics such as Kaagaz Ke Phool (1959) was once summarily rejected by the audience but it trudged its way to the list of all-time great movies. On the contrary, an endless number of films, hailed unequivocally as classics at the time of their release, have since been buried forever in the yellow pages of the history of Bollywood.

Of all its decades, 1990s do appear to be replete with run-of-the-mill movies, with least number of all-time classics. It is amply illustrated by the fact that most of the favourite films chosen by the stars are in the range of mediocre-to-above average category. Barring a Satya (1998) here or Zakhm (1998) there, only a few films from the decade merit a place on the list of outstanding movies. Kajol, for one, has picked her own movies, Kuch Kuch Hota Hai (1998) and Pyaar To Hona Hi Tha (1998) -- both breezy entertainers no doubt, but with limited shelf lives. For his part, Ranveer Singh has preferred David Dhawan’s comedies, Raja Babu (1994) and Judwaa (1997), which he apparently grew up watching and chuckling.

The stars are well within their rights to choose whichever movies they liked. But there is no denying the fact that the decade was awfully devoid of classics. The era was primarily dominated by slapstick comedies, mindless action flicks and soporific family socials, though the most popular genre was bubblegum romances. Movies like Ashiqui (1990), Dil (1990), Saajan (1991), Ishq (1997), Dil Hai Ki Maanta Nahin (1991), Dilwale Dulhania Le Jayenge (1995), Kuch Kuch Hota Hai (1998), Dil To Pagal Hai (1997) and Hum Dil De Chuke Sanam (1999) carried forward the Hindi cinema’s time-tested tradition of romantic movies. Family socials on saccharine drips like Hum Aapke Hai Koun! (1994) and Hum Saath-Saath Hain (1999) too clicked. It was also a decade of Govinda and David Dhawan, the actor-director duo that churned out an endless number of zany comedies, right from Shola Aur Shabnam (1992) and Aankhen (1993) to Coolie No. 1 (1995) and Hero No. 1(1997). A few good action flicks such as Ghayal (1990), Ghatak (1996) from the Sunny Deol-Rajkumar Santoshi combination, and also J P Dutta’s Border (1997) came in between.

There was, of course, no dearth of commercial successes in this period, including Dilwale Dulhania Le Jayenge, which continued to run at a Mumbai theatre, 24 years after its release, until the lockdown happened. And yet, the stars today have had limited choices when it comes to pick the best from the decade. A vast majority of them have chosen films like Kuch Kuch Hota Hai, Dilwale Dulhania Le Jayenge, Baazigar (1993), Hum Aapke Hain Koun! and Andaz Apna Apna (1994) as their favourites. All these movies, of course, feature stars such as Salman Khan, Aamir Khan, Shah Rukh Khan, who are still ruling the roost. Actually, the Khan triumvirate was back then responsible for the revival of light-hearted romantic musicals, which had gone out of vogue after 1960s. The rise of these young actors had coincided with the decline in the fortunes of the big stars from previous generations, with the notable exception of Anil Kapoor. Mithun Chakravorty, once a top draw, shifted to Ooty to unleash substandard movies one after another while Amitabh Bachchan took a long sabbatical after Hum (1990) and Khuda Gawah (1992). And when he finally returned in the latter half of the decade, he found his Midas touch missing following the release of commercial duds like Mrityudaata (1997) and Sooryavansham (1999). He soon turned to character roles with Mohabbatein (2000).

Such was the tendency among the film-makers to follow the trend of formula flicks in those days that only a few of them dared to buck it. Ek Doctor Ki Maut (1990), Shiva (1990) Lamhe (1991, Kasba (1991), Droh Kaal (1994), Bandit Queen (1994), Is Raat Ki Subah Nahin (1996) and a few others did make a mark intermittently as a refreshing change amidst the mayhem of mindless masala ventures but there were hardly any takers for them at the box office. In fact, one does not find any silver lining until the last two years of the decade when films such Zakhm, Shool (1999), Sarfarosh (1999), Vaastav (1999) and, above all, Satya (1998) began to indicate the inevitable change, which went on to become a trend in the new millennium with movies like Dil Chahta Hai, Chandni Bar and Lagaan, all released in 2001.

Bollywood has since turned over a new leaf with a remarkable turnaround, preparing the ground for the growth of content-rich cinema. The same stars, who did not mind doing formula ventures earlier, have developed a taste for solid plots with films like Munnabhai MBBS (2003), 3 Idiots (2009) and Bajrangi Bhaijaan (2015). Even though the star system continues to flourish long after the 1990s, the big divide between the commercial and parallel cinema has blurred gradually with the wide acceptance of small-budget, meaningful movies along the way.

That is why, looking back, 1990s look so dated and so devoid of great movies. A few decades from now, movie lovers may well be spoilt for choice if they will be asked to pick their favourites from the first two decades of this millennium. But 1990s, alas, will continue to be viewed as a veritable minefield of mediocre movies.