Bollywood’s Double Whammy For Bald People Is Regressive, Not Cool

It will be a pity if Ujda Chaman and Bala fall back upon the old, regressive tropes, fail to use healthy humour for disseminating a serious message and make even one bald person in the audience leave the theatre in disgust. 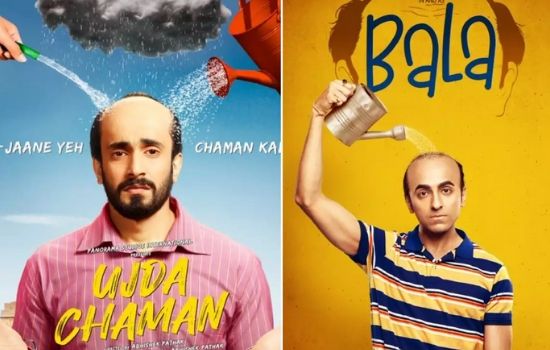 Here is a disclaimer, to begin with. I have not turned bald yet, and I have no axe to grind if I dare to call the two upcoming Bollywood movies – Bala and Ujda Chaman – flagrantly regressive in the present era. These movies with an identical theme of premature balding seem to be perpetuating a stereotype about the hapless people, who lose their hair in the prime of their youth. Even on the pretext of highlighting the stigma attached with baldness through comedy, denigration of a bald man on celluloid is no laughing matter.

None of these movies has been released yet. But if their trailers are anything to go by, the main protagonist in both films is shown to be at the receiving end of nasty jokes cracked at his expense, with people making fun of his receding or missing hairlines with impunity. They are also shown as being desperate enough guys who try out all kinds of concoctions on their scalps to grow hair – somebody even suggests a liberal application of a mix of buffalo’s dung and a bull’s semen! Poor guys, they even want to pluck their pubic hair for hair transplant!

Hey, Bollywood, don’t stoop to this level in the name of content-rich cinema. This is simply not done. At a time when the film industry has been consciously trying to steer clear of age-old stereotypes, is it not uncool to laugh at a bald person’s expense? At the end of the day, though these movies may try to deliver a message that it is the inner beauty of a man that ultimately matters, much of the screentime, I am sure, will be consumed by the barbs, insults and humiliation meted out to the lead actors suffering from what is known as alopecia areta, a medical condition that leads to unpredictable hair loss. As their trailers also show, they are invariably called “ganja”, “takla” and other terms of derision often used for bald people in society. The title of one film itself, Ujda Chaman, underlines the kind of humour it seeks to peddle while dealing with this issue. In a nutshell, it amounts to nothing but body-shaming. If calling an obese person “mota” or “moti” is offensive and politically incorrect on screen, calling a bald man “takla” or “ganja” is equally reprehensible, which should not be done even under the garb of humour. Sadly, the makers of these films appear to be rather insensitive to the fact that lampooning of hair loss may erode the self-esteem of a bald man.

In recent years, Bollywood had shown a remarkable sensitivity towards the varied themes related to gender, sexual orientation, and body shaming. Yashraj Films’ Dum Laga Ke Haisha (2015) was a beautiful story about a plump girl but at no point did it denigrate overweight people. Similar was the case of Shubh Mangal Saavdhan (2017), which revolved around the theme of erectile dysfunction. Incidentally, both these movies starred Ayushmann Khurrana in the lead, the poster boy of meaningful cinema, who had delivered a classic like Article 15 earlier this year. Sadly, it does not seem to be the case with either Bala or Ujda Chaman both of which have taken liberties with the bald people so as to evoke chuckles in the theatres.

Worse still, their makers are in a race at the moment to release their ‘masterpiece’ first. Sunny Singh-starrer, Ujda Chaman is scheduled to release on November 8 while Bala’s producers have rescheduled its release on November 7 instead of the previously announced November 15.It is their clash that worries them, not the absence of insensitivity towardsbald people.

However, such stereotyping was always a staple of Bollywood in the past. Tuntun’s obesity was always used for comic relief; V. Gopal always stammered and Raj Kishore played the character of an effeminate person in film after film just to evoke laughter. There are numerous other examples of the film-makers trying to give comic relief to the audiences through the physicality of a particular character. But that seemed to be a thing of the past in the new millennium when the taste of the audiences began to change for better. Of all people, Shah Rukh Khan dared to play a vertically challenged man in his Zero (2017), a far cry from the times when midgets were used merely to elicit guffaws from the audiences.

That is why it will be a pity if Ujda Chaman and Bala fall back upon the old, regressive tropes, fail to use healthy humour for disseminating a serious message and make even one bald person in the audience leave the theatre in disgust. Bollywood cannot afford to take two steps backwards from where it has reached in the past few years.