Most party men and observers reckon Karnataka's muddling political scenario will trundle along at least until the parliamentary elections, which the JDS and Congress plan to fight as allies. 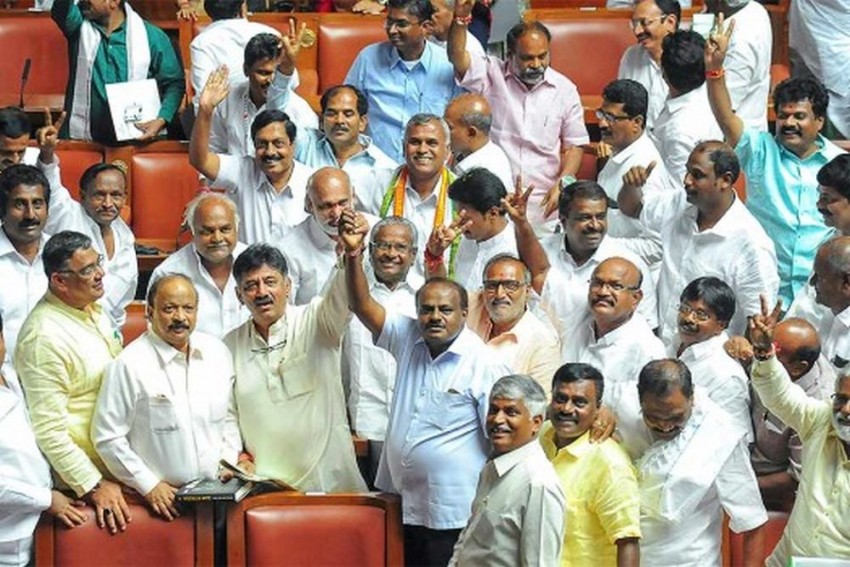 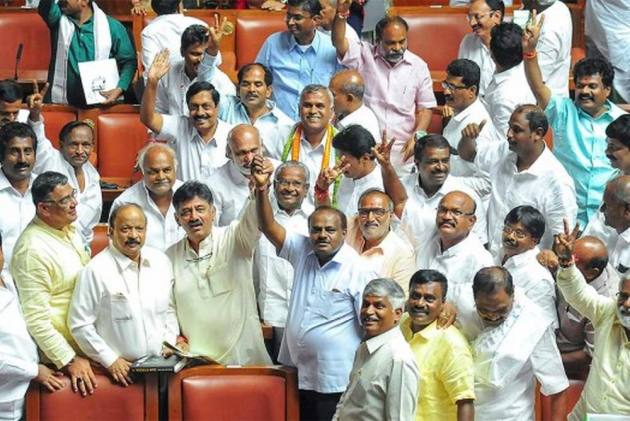 Offers, counter strategy, threats and parleys -- a jumble of all this is on the menu in Karnataka as the Janata Dal Secular-Congress coalition completes its fourth month in office this week.

First, from northern Belgaum district came a grumble from state minister for municipalities Ramesh Jarkiholi and his brother Satish, an MLA – both Congressmen -- which gave their party a fresh headache, just after it had dealt with a general outcry in July from local leaders who hadn't made it to the H D Kumaraswamy cabinet. While Kumaraswamy's JDS has 10 ministers in government, the Congress has 15 and all eyes are on an impending expansion of the cabinet -- the Congress party still has six positions vacant which it will have to fill up, calling for a delicate balancing act.

The Jarkiholi family of five brothers -- three of them are legislators including Balachandra, a BJP MLA -- holds considerable sway in Belgaum and are currently engaged in a squabble with first-time Congress MLA Laxmi Hebbalkar -- seemingly a turf battle in Belgaum that's being read in the context of the vacant ministerial berths which have many claimants. But it has also set off speculation over defections -- a much-debated prospect ever since the Karnataka assembly elections in May threw up a hung assembly and the BJP made an early, futile bid to form government despite not having enough MLAs. The scenes in May were indeed dramatic: parties guarding their legislators for over a week till finally the BJP's B S Yeddyurappa resigned as CM -- two days after he was sworn in -- unable to prove the party had a majority and amid allegations that it was wooing rival legislators with huge money. Now, the ruling JDS-Congress combine has the support of 117 legislators (including two from small parties and an independent) in the current assembly of 222 members (two seats are vacant) while the BJP has 104.

Add to this the cryptic statements and slanging matches. The Jarkiholis say they will not rock the boat but they cannot be held responsible 'if some other Congress MLAs bring down the government'. Meanwhile, the Congress last week claimed that the BJP was trying to lure three of its MLAs by offering them cash and even took a complaint to the Income Tax department asking that the allegation be probed. "Insanity seems to have completely gripped the Congress," retorted BJP leader B S Yeddyurappa. But that didn't stop the speculation, especially after Chief Minister Kumaraswamy fired a fresh salvo, accusing the BJP of trying to destabilise his government using underworld elements -- a charge the party has denied, saying instead that the JDS-Congress government will fall on its own. The BJP's central leadership, Yeddyurappa said a few days ago, has advised the state unit not to add to the confusion. Despite that, fresh accusations of MLAs being approached surfaced this week and the pace of political activity increased.

Within the Congress, however, the internal power equations have changed since the assembly polls in May, giving local leaders room to assert themselves. While former CM Siddaramaiah isn't part of the government -- he's currently heading a coordination committee -- he still holds considerable influence and many dissenting local leaders rally behind him. Last week, as Siddaramaiah returned after a vacation in Europe, senior Congressmen turned to him to weigh in on restive party men who were striking a discordant note. "Once they lost the election, practically every leader in the Congress party saw an opportunity for himself to assert his presence. It has invariably led to factionalism coming to the fore," says political commentator Sandeep Shastri. "What is happening in Belgaum is a reflection of that: it's shadow boxing among leaders jockeying for that leadership position." And, by most accounts, the party will keep the vacant ministerial berths as they are for a while longer.

All three parties are facing their own challenges, reckons Shastri. The BJP in Karnataka, he says, wants to use every opportunity to come to power in the state whereas its national leadership is focussed on the Lok Sabha elections. The JDS, meanwhile, would want to make the best of the situation they are in. "They could not have asked for a better bargain," he says.

Most party men and observers reckon Karnataka's muddling political scenario will trundle along at least until the parliamentary elections, which the JDS and Congress plan to fight as allies. "Essentially, each one is playing to their own constituencies," says political commentator Narendar Pani. "Each one is trying to consolidate their base locally. So there are a lot of pressures coming up."