When Bhimsen Joshi was awarded Bharat Ratna, his guru-bahan, Gangubai Hangal,  was deeply nostalgic about the intense training the two received in Kundgol under Sawai Gandharva, and recalled how her Bhimanna would carry a lantern as he accompanied her to the local railway station every night when she headed back home to Hubli.

She also recalled Bhimsen's 'gandabandhan', an event where the guru accepts you as his disciple in public. "It happened at the Hubli Railway Institute and our guru Sawai Gandharva tied threads of five colours on his wrist. This was around 1948-49. As an elder sister I feel very proud about my brother being called a Bharat Ratna."

As a schoolgirl, she sang the welcome song at the only Congress session Mahatma Gandhi presided over. In her teens, her music was recorded by HMV. In 1936, she sang on All India Radio for the first time as a stand-in for Hirabai Barodekar. Thus began Gangubai Hangal’s journey on the road to musical greatness.

Gangubai has sat at the high table of Indian classical music for the last 50 years. Though much admired for the intensity and profundity of her music, she has never been an icon. A disciplined professional, her simplicity and generosity have endeared her to fellow musicians who call her ‘akka’ (elder sister). A sheaf of honours, including a
Padma Vibhushan, haven’t gone to her head. She makes no bones about the fact that she has to earn in order to feed a large family.

***
There were many stories about her name. As she clarified to Mohan Nadkarni, with her typical laughter:

My family name was Gandhari Hangal, but the recording company rechristened me Gangubai Hublikar, because my native place, Hangal, was a small town compared to Hubli, which has been a leading centre of trade and commerce. I was told by the bosses that the change would bring me wider fame. That was not all. One of the company bosses had second thoughts, as a result of which my original name (Gandhari) came to be printed on some of the records instead of Gangubai, as it was considered too common a name. This jumbling of names continued for some time, till I came to be known by my present name.

***
Deepa Ganesh quoted her in the Frontline, telling film-maker Vijaya Mulay, in the initial years of television:

“If a male musician is a Muslim, he becomes an Ustad. If he is a Hindu, he becomes a Pandit. But women like Kesarbai and Mogubai just remain Bais.”

She was not bitter when she recounted her childhood:

"I was born in Shukravaradapete in Dharwad. It was a Brahmins' colony and those were conservative times," she says. It was forbidden to enter Brahmin thresholds. Gangubai remembers how, as a little girl, she went into the neighbour's garden and was caught stealing mangoes. They were aghast at the impunity of a singer's daughter. "Ironically, the very same people now invite me to their houses and spread a lavish lunch for me."

Ten years back, when she turned 87, Sudipta Datta profiled her for Outlook:

If she dithered, but for a moment, when we asked her if she'd accompany us to Lake Hunkal—her hometown Hubli's prettiest spot—it's because she's terribly camera-shy. "Ye sab hamne kabhi nahin kiya, kabhi pose nahin kiya (I've never done this, never struck a pose)," she confesses in broken Hindi

***
Gangubai recalls how HMV would rent a house, cook and all. It was a long process—wax records had to be made and dried before a song could be recorded. Once, she reminisces, she had decided to take the evening train to Hubli after a particularly long session when she found a man from HMV waiting for her at the station. The records had broken, he told her, and the recording had to be done all over again.

***
In true deva-dasi tradition, she settled down with her yajman Gururao Kaulgi—"I was afraid a civil marriage would destroy my family." He was a lawyer, but didn't practice; his business ventures flopped. There was much hardship. "I couldn't bear his unhappiness." And it reflected on her music. She'd break down while practising—"It was as if there was a
cloud around me." Not for long. As she made her name—she says the record companies helped a lot—her life fell into place.

***
As Sharada Prasad noted, she had "enough sense of humour to make fun of her own masculine voice. Bendre the poet had once said that the unexorcised ghost of a gawai must have made its permanent home in her voice. She told Sudipta Datta:

"Before the '50s, I had a soft voice. Then I had tonsilitis. I used to be in great pain. A doctor treated me for it with electric shocks. The pain went, but my voice changed. I didn't mind it at all." 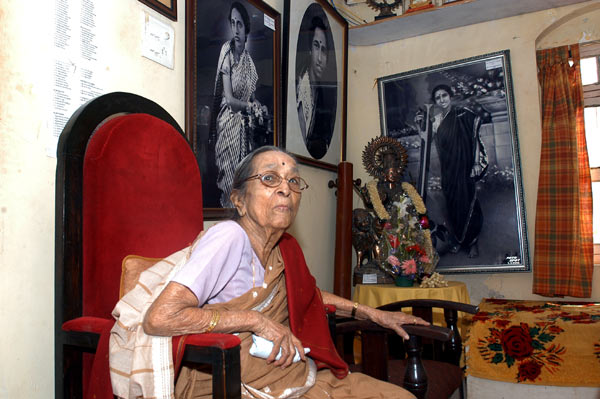 Her mother Ambabai was a Carnatic musician; so was grandmother Kamalabai. But Gangubai took to Hindustani classical: "Radio me sun kar mujhe bahut achcha laga (I liked it when I heard it on radio)." As she toold Deepa Ganesh:

[Ambabai] was so brilliant that the best of musicians came to listen to her. Abdul Karim Khan, the forerunner of the Kirana gharana, would often drop in to listen to Ambabai. In fact, Gangubai remembers how on one occasion he had remarked: "I feel I am in Tanjore." Ambabai tried to train the little Gangu in Carnatic music, but realised that her heart was elsewhere. On her way back from the National School (she repeats the name of her school several times with great pride) Gangubai would stop by to listen to the gramophone played at almost all the petty shops in Kamanakatte.

"They had a huge horn, you know," says a wide-eyed Gangubai. "I can't remember who the singer was, but it was `Radhe bolo mujhse'." Gangubai kept humming these tunes throughout the day, all the time. "You are not intelligent enough to keep the two systems separate. So you learn Hindustani," he mother said.

***
Mohan Nadkarni once asked her about a possible unification of the Hindustani and classical paramparas, asking her views on the state-sponsored 'National Integration Through Music', featuring Bhimsen Joshi and Balamurali Krishna, in 1986 and the latter and Kishori Amonkar jugalbandi. She just laughed and said:

How could there be unification of the two paramparas? I simply can't imagine such a blend. The two systems have enjoyed a peaceful co-existence without shedding their basic character and identity. Shouldn't we leave them alone to grow and prosper on their own?

***
She described her culture shock on first visiting Bombay to C.S. Lakshmi, in The Singer and the Song - Conversations with Women Musicians Vol 1 (2000):

Then [Kundant Lal] Saigal came. He said, "Wah, Bai," and put his hand on my shoulder. I was used to that. My mother used to put her hand on my shoulder like that. Do you know what a strange feeling I had? I turned and saw Saigal. I got angry, very angry and told my uncle, "What kind of people are these? They keep their hands on another person's shoulder - can't they make out I am a woman?" (Laughs) Nowadays, they embrace. Now all this...(We laugh)

***
In the same interview, she guilelessly recounted her memories of receiving the Padma Bhushan (much before the Vibushan, which came later):

It is normally announced to the D.C. (District Collector) here. Then they come to ask to check who the person is, whether they want to receive the award or not.... They came and took my signature from the Tehsildar's office. After they took it, I thought, 'These are announced on January 26th, maybe on the 25th night. I must listen to the radio before I sleep. Both of us must sit together before the radio, listen to the announcement and then sleep'. We sat for a long time. Nothing was announced. So I said, "Look, they asked me for my signature just like that. It's not there. Nothing has come." It did not occur to me that nobody's name was announced. Mine didn't come, this is all I thought.

Then Mama went and slept, I came here and slept. It was 12.30 in the night when I got two congratulatory telegrams - Indira Gandhi's and Jagjivan Ram's. Who has ever sent congratulatory telegrams to me? (Laughter) I went and woke him up and he came and sat with me. What did we do? We cried till dawn. Because of music...all that we had gone through...The joy was real. But we thought of the past. That one person didn't live to see this, she didn't live to see this...

Gangubai: Yes. My grandmother didn't see, my householder(*) didn't see (*The word 'husband' does not exist in Kannada. A term commonly used is ejamanaru which means 'Master'). All this came to my mind. It was 4:00 or 4:30 in the morning. Then the paper came. There used to be a newspaperman who used to come here. Someone known to us went and got the paper- "Wake up, wake up, you have got the Padma Bhushan!" As soon as he said that, again everyone who was not here came to mind.

Soak in her music at

Elsewhere on the web: