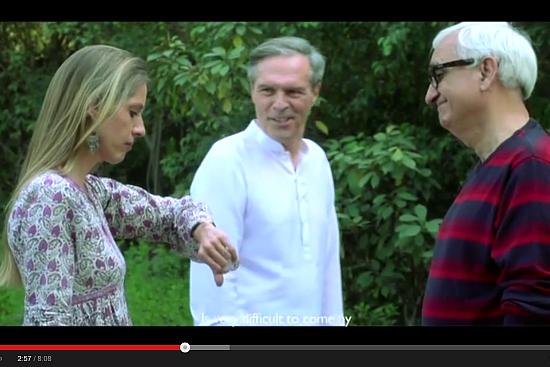 Turns out German Ambassador to India Michael Steiner is quite the Bolly buff.

In a tribute to the Hindi Film Industry the ambassador has made his acting debut in a remake of a music video from the Shah Rukh Khan-Preity Zinta-Saif Ali Khan starrer Kal Ho Na Ho.

Steiner loved the title song of the Karan Johar-directed movie which was penned by Javed Akhtar and sung by Sonu Nigam and which talks about seizing the day.

Besides Steiner, the video also stars his wife Eliese in the role played by Preity Zinta in the original video while Saif's shoes are filled -- and this is the best one so far -- by former foreign minister of India, Salman Khurshid! Needless to say, our ex foreign minister does a wonderful job of romancing the German envoy's wife.

Oh and there is another surprise. Guess who plays Shah Rukh aka Steiner's mom in the video. Madhu Kishwar!

Steiner said working on the three-and-a-half-minute music video was tough and has renewed his respect for actors.

"There were three difficulties, one, the only acting that I did was in my school some 50 years ago, second, I don't know Hindi so lip-syncing was very hard and third, Germans are not known for their sense of humour," Steiner said at its launch at his residence here today.

Tagore said it was fun to see Steiner doing SRK's role and Khurshid playing her actor-son Saif in the video.

"Bollywood has been a wonderful ambassador of Indian culture and Indianness all over the world. Many years ago we were slightly rubbished but everybody knows the potential of Bollywood now. Also, the theme of Kal Ho Naa Ho resonates with the youth," Tagore said.

Khurshid said while it was very tough to imitate Saif's style in the song, it would be a lot tougher to play him in politics.

Javed Akhtar joked that he always believed that politicians and diplomats were good actors and now he had a video proof of that.

Steiner said it was a lot of hard work for him as he does not know Hindi.

"It was a challenge. These actors are masters and I had to imitate them. I realised that you cannot imitate Shah Rukh Khan. He is such a perfect actor. We wanted to show our respect to Bollywood and these fantastic actors. They are very popular in Germany.

"Bollywood is a cultural institution. This is the one instrument to connect to the world and it is a very good instrument. Me and my wife are Bollywood addicts. She has seen more than 150 Bollywood films... We have seen them together," the ambassador said.

Funnily, this is not the first display of German obsession with this particular song.

Back in 2014, German Bolly fans produced another remake of this very music video.