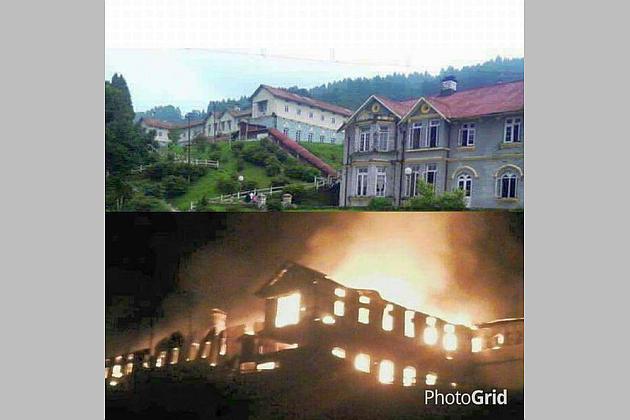 My first memory of my first day at Dow Hill school goes something like this…that I was alone, I was petrified, I was freezing in the sub zero temperature, I didn’t know where the kindergarten classes were held, my shoe laces were untied and I was late.

Nevertheless with a sang-froid I did not feel that I entered the old Gothic building that passed for junior school and sat at the furthest end of the class on a chair too high for me. It was after two months that I discovered that it was Class 1 that I had been attending all along and getting on famously with my class teacher.

As childhood memories flash past, I am trying to reconcile the past with the present. The quaint old wooden structure of the junior school burnt down completely in a fire that raged for five hours on Thursday. That was one third of the all-boarding heritage school, nestled in the hills of Darjeeling and one of the oldest in the country, that was reduced to ashes. There were no casualties as the school was closed for the three month winter break.

District Magistrate Ashok Srivastava says the cause of the fire is still being ascertained. “It could be sabotage, it could be carelessness of the contractor as the school was being renovated or it could be a short circuit. We are looking at all three,” he says.

A fire engine did appear an hour and a half after the fire broke out but the hosepipe was big enough just to water the plants, say scornful residents. By the time the bigger fire engines arrived from Siliguri and Darjeeling, it was only the walls that were left.

A forest department employee, Robin Thapa says, “I arrived 45 minutes after the fire started. What I can’t understand is how could the fire engulf the entire junior school which is spread across a huge area. The dormitories, the dining areas, the junior classrooms, everything was on fire in 45 minutes?”

Last September, chief minister Mamata Banerjee had earmarked Rs 30 crore for the redevelopment of the school and a education hub here. Angry residents are drawing a connect between greedy contractors and the promised fund. Another fire had broken out three months ago in the local municipal building, gutting another heritage building that was undergoing repairs.

Srivastava says fire tenders had no access to the building. But whatever happened to the metalled road right next to junior school and that winds its way up the entire campus? When Dow Hill started out in 1879, the East India Company constructed a sprawling campus spread across an entire hill side with easy access and buildings that have survived two world wars and many an earthquake.

School authorities have typically lodged an FIR and no one has been named. A cynical estimate of expenses have been worked out. Government contractors will begin work to get the junior wing up and about before the school opens in a month. A typical sarkari building will come up, PWD style.

But will the contractors work out an estimate for the old rhododendron tree or the wild roses of May that covered the corrugated tin roofs or the painstaking woodwork that kept the school warm in freezing November. A few years ago, while googling Dow Hill School, I made a chance discovery. Dow Hill was one of the 10 most haunted places in the country. As the smoke rises from the ashes, I think it's easier to live with resident ghosts then greedy saboteurs and indifferent authorities.