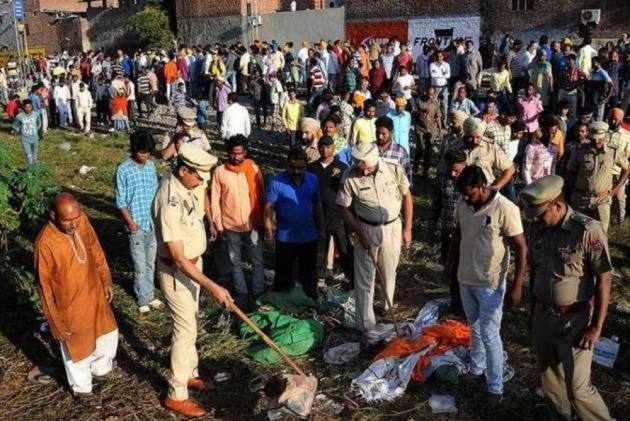 Who is the trespasser? Are they the common citizens who encroach on rail tracks and sometimes – as happened near Amritsar on the day of the Hindu festival of Dussehra - meet gory deaths by getting mowed down by moving trains? Or, has the Indian Railways infringed upon the rights of free passage of citizens by building tracks in a manner that cuts up cities and colonies into two or more parts across India’s countryside?

One could come to this question later. First, the stark facts: Among all modes of transport, the Indian Railways finds itself at the top of the heap in terms of “freak and avoidable” accidents. Two days after the gruesome Amritsar disaster that led to 61 deaths and injuries to approximately 150 others, a rail overbridge collapsed at Santragachi near Howrah, leaving two people to leap to their deaths and injured 14 others.

In the past, passengers have died after a last-minute public announcement on the change of platform of a departing train that caused a stampede. On one occasion, scores of roof-top travellers banged their heads against the wall of a road overbridge and died. In Mumbai suburban services, approximately 10 people are reportedly crushed by moving trains while crossing the tracks. And, of course, passengers die because of head-on collisions of two trains or because of derailments and fire incidents in coaches. In brief, Indian rail operations bring daily reminders about the organisation’s scant regard for human lives.

Three categories of rail-related deaths happen: Loss of passenger lives because of train accidents, deaths of intruders, and suicide-related fatalities. But for the first group (passenger deaths) – and unlike stipulated guidelines of other forms of transport such as Road and Highways – the Railways does not account for and does not have a comprehensive policy on coverage on other kinds of rail-related deaths. The situation being such, Chairman Railway Board Ashwani Lohani’s cruel and insensitive comment on the day of the Amritsar tragedy has been taken in rail circles as being normal. Reaching the accident site on the day of the tragedy, Lohani had said: “The Railways are not responsible for the tragedy.”

Whether or not the Railways can be held partially accountable for the Amritsar tragedy is another matter. A bigger worry is that each accident has resulted in a blame-game and a display of some bipolar syndrome. After Amritsar happened, for instance, the ministry’s PR machinery has been in a high-action mode to promote the glitzy and Next-Gen T-18 trains that can run at speeds of 200 kilometres per hour. There is even some talk about a press trip being organised for the inauguration of India’s longest railcum-road bridge - called the Bogibeel bridge.

Operating and safety systems of the Indian Railways do not meet international parameters. Passenger rush at stations and platforms are unregulated and far more than accepted standards on safety. Overbridges are inadequate in design and faulty in construction. The task of building road over-bridges and road under-bridges remains incomplete. Taking India’s demography and rights of free passage of citizens into consideration, the Indian Railways can think about devising or re-tweaking its policy on operating trains in densely populated areas. If the metro systems can achieve safety standards without infringing on the rights of free passage of citizens, why can't the Indian Railways?

Some cheer for passengers of the Indian Railways comes by way of the ministry’s decision on Thursday to expand upon the healthcare facilities for the travelling public. According to an official release, first-aid emergency care and medical boxes containing a wide range of medicines, dressing material, consumables and oxygen cylinders will be available in all major passenger trains and railway stations. These items will be available with the train superintendents and guards; as also with station masters.

Palace On Wheels To Run On Steam

The Palace on Wheels – India’s iconic luxury train that operates on the Delhi-Rajasthan circuit via the international tourist centre of Agra – will now be pulled by steam engines. Trials on running the rake on a steam locomotive will begin next month and the services will begin by December. So far, the luxury train has been pulled by the conventional diesel locos.

Meanwhile, there is more news for heritage enthusiasts. Beginning November 10, the Fairy Queen – the world’s oldest steam engine in running condition – will pull a special train on the Delhi-Rewari route. Plans to run the first “Steam Charter” in Himachal’s Kangra Valley region from December have also been finalised.