A Crazy, Hot Election Season Refuses To Go Away In Tamil Nadu

It is the peak of summer in Tamil Nadu – Agni Nakshathiram – the equivalent of Kahthiri in the North. Hot winds start blowing from the morning and people hunt for shades and gulp down water and cool drinks by the gallons 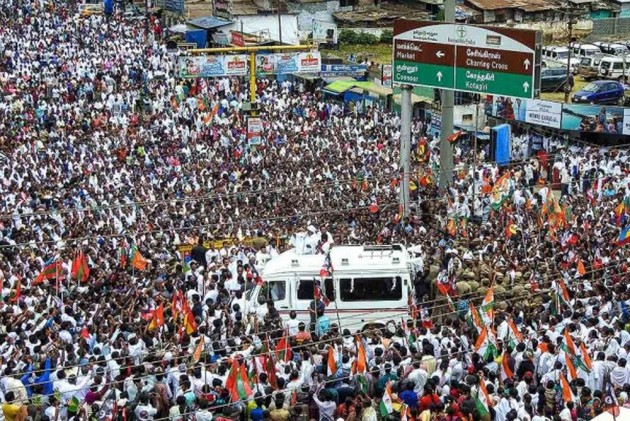 With four more by-elections on May 19, the exhausting election campaign in the peak of summer seems unending in the southern state of Tamil Nadu.

It is the peak of summer in Tamil Nadu – Agni Nakshathiram – the equivalent of Kahthiri in the North. Hot winds start blowing from the morning and people hunt for shades and gulp down water and cool drinks by the gallons. And unless unavoidable very few step out of their homes.

But the poor politicians of the state are still huffing and puffing on the streets, canvassing for votes even though Tamil Nadu voted on April 18 for its 39 Lok Sabha seats and 18 Assembly by-elections. The leftover battle is for four Assembly seats whose elections were notified later and would be held on May 19.

Since the ruling AIADMK is still short of a majority in a full 234-member House, these four seats have become a must win for the ruling party as it is unsure of how many seats it will bag from the 18 that went to polls on April 18. While aiming to win these four, the AIADMK also sought to reduce the effective strength of the House by seeking to disqualify three dissident MLAs who have sided with TTV Dhinakaran’s AMMK.

But that move came a cropper as the Supreme Court stayed the notice issued to them by the Speaker and now those three can pitch in with their votes if a no-confidence vote is moved against the EPS government after May 23. No wonder EPS and his Ministers, MK Stalin and leaders of the DMK-led alliance are sweating it out to grab these four seats which could decide the future of Tamil Nadu politics.

Stalin has declared that the EPS government would fall as the DMK would win all the 22 seats and along with Congress and IUML would command a working majority. Dhinakaran’s right-hand man Thanga Tamilselvan has promised that his party would join hands with the DMK to pull down the EPS government. And EPS is crying out loud, “Look who is the real traitor who is collaborating with the enemy of Amma,” pointing to the new unholy alliance between the AMMK and DMK.

EPS is not wrong, as in seats where it is weak the AMMK has been urging its supporters to vote for the DMK to defeat the AIADMK rather than waste it on their own party. The short term plan of Stalin and Dhinakaran is to leave the EPS government tottering on the brink, with a wafer-thin majority or very close to it. Both of them hope that a change at the Centre would trigger fresh desertions and the toppling of the EPS government thus paving the way for a new government or fresh elections.

But an NDA win could see their plans come to a naught as the Centre has been very protective of the AIADMK government and would do everything to prop it up.

The post-poll scenario means that the exhausting election campaign would be followed by an equally exciting post-poll phase that could leave the state completely enervated politically. And if all of this confusion finally results in a mid-term poll, Tamil Nadu would be staring at election ennui.