Atmanirbhar Bharat And A Clueless Government

The Atmanirbhar Bharat Abhiyan has been moving at an amazing pace. For example, the Gujarat government clearly made arrangement for treatment of the Covid-struck, but once on locally-made Dhaman-1 ventilators -- because local ke liye vocal-- a patient had to be Atmanirbhar for recovery. 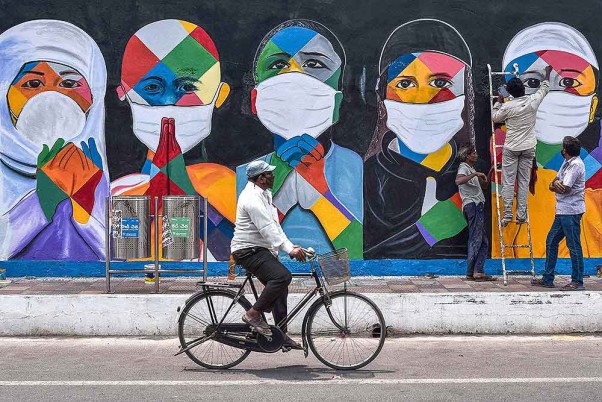 In the classic 1954 movie, Boot Polish, the iconic Raj Kapoor production had this very popular song: Nanhe Munne Bachche, Teri Muththi Mei Kya Hai; Muththi Mei Hai Taqdeer Hamari… The still unfolding migrant labour crisis has convinced me that the government of India has taken the song to heart, leaving not just the country’s children but its entire population with only their taqdeer in their hands.

Jyoti Kumari, a 15-year-old girl cycled 1200 kms. with her injured father from Gurgaon in Haryana to her native village of Sirhulli in Bihar’s Darbhanga district. The Cycling Federation of India now wants Jyoti to come for cycling trials while all that the girl hopes to do is to study further, complete her matriculation which she had been forced to give up mid-way due to her family’s financial troubles. Looking at this government’s remarkable ability to think out of box, one wonders whether a series of humanitarian crises is in the offing to identify potential athletes for the various sports federations. Someone at the Niti Aayog is surely putting together a power point presentation on how to make India a super power in sports.

As stranded migrants were still struggling to grasp what other hardships their fate - taqdeer – had in store for them, the Railway Ministry decided to bring some cheer to their lives by quietly starting a Bharat Darshan-cum-Adventure Travel division without any fanfare that usually precedes any new initiative by the Centre. A train bound for Gorakhpur in Uttar Pradesh from Mumbai in Maharashtra pulled in at Odisha’s Rourkela station. The government in general and the railway minister in particular, have been furious at the lack of gratitude shown by passengers for the extended journey at no additional cost – or food. Not one to be disheartened so easily, the ministry quickly overcame the disappointment from the feedback for the Mumbai-Gorakhpur via Rourkela five nights, six days travel package and tried multiple other surprise tour packages spread over 50 Shramik Special train routes. But then, you just can’t please the ‘vultures and prophets of doom’, can you?

The state-run Doordarshan has also started asking for the aam janata’s feedback on Twitter. I, however, think this is another effort by the government to keep us all gainfully occupied during the lockdown. They recently sought inputs for Prime Minister’s monthly Mann Ki Baat. I had responded requesting them to make it biennial but there has been no response ever since.

Meanwhile, the Atmanirbhar Bharat Abhiyan has been moving at an amazing pace. Take the example of those faulty Dhaman-1 ventilators developed by Jyoti CNC, a company based in Rajkot, Gujarat. The Gujarat chief minister was quite local ke liye vocal when Dhaman-1 was unveiled. The process followed to approve these ventilators had that sweet sickly whiff of connected businessmen that governments are nirbhar upon. But then, doctors at the Ahmedabad Civil Hospital kicked up a row by sending an SOS for ventilators that actually work because patients put on the locally produced machine were in visible discomfort. The government clearly made arrangement for treatment of the Covid-struck but once on Dhaman-1, a patient had to be atmanirbhar for recovery.

In a testimony to how seriously it thinks of everyone, sick or healthy, the Centre also launched a five-part limited series simultaneously on all TV news channels for those who are deprived of Netflix and other sundry OTT subscriptions. The series, broadcast at 4 PM sharp over five days was titled “Rs 20 Lakh Crore”. Strangely though, the soft-launch by the Prime Minister a day before the limited series premiered registered a much higher viewership. The actual series featuring the finance minister in the lead role and with subtitles by her Quick Gun deputy minister, who has his own dedicated fan-base from his lead role in an earlier short film titled Goli Maaro S**lo Ko, didn’t set the cash register ringing at the box office. The series did have one short moment that will be remembered for posterity, much like iconic scenes from many films – the one in which a mere mention of a leader of an Opposition party led to hand wringing and verbal staccatos that proved Meryl Streep to be a lesser dramebaaz.

The lockdown is coming to an end now and we have to now learn another new term – ‘Unlock-down’. I am cleaning my balcony to clear space for ekapadasana or the one-legged yoga pose; better be prepared for the Prime Minister’s call to all of us to crush Covid-19 with one leg while simultaneously expressing gratitude to the Corona Warriors. As for what is in, or remains of, our taqdeer, wait for the Supreme Leader's next desh ke naam sandesh for clear leads.

(The author is the national spokesperson of AAP and former Lok Sabha MP. Views are personal.)

Jeevan Prakash Sharma / As the threat due to the Omicron variant of the coronavirus rises in India, public health experts advise travellers to follow five steps to avoid contracting Covid-19.