Aurat ka Dal, and 99 Other Reasons Why Not to Impose Hindi

The idea of making Hindi the ‘national language’ of India, tossed into the murky September air by Union home minister Amit Shah a few days ago, is an act of willful diversion, pure and simple. 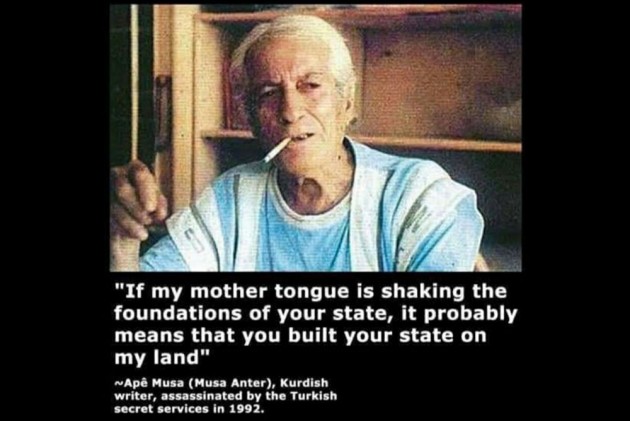 First things first. The idea of making Hindi the ‘national language’ of India, tossed into the murky September air by Union home minister Amit Shah a few days ago, is an act of willful diversion, pure and simple. It’s meant to keep everyone off-balance and in a state of frenzy, a state where calmer reckonings become impossible. Kashmir and pan-India NRC have the same intent: they’re political Hindutva. Hindi, on the other hand, is a pellet-gun blast of cultural Hindutva -- put out there with full knowledge of the social media storm that would follow. Indeed, even inviting it. Anything to get people to talk about things other than falling underwear sales.

Hilarious memes filled the air soon enough. The BJP’s own Yediyurappa was quick to say no (Karnataka has been having enough problems with the NDA regime having debarred local languages from some crucial exams.) As things stood, actor Kamalahaasan found the atmosphere conducive enough to issue a throaty, dulcet Dravidian warning -- his slick video signs off with Bharathiyar’s anthemic words expressing an alternate form of nationalism, ‘Vaazhiya Shentamizh, Vaazhga Naatramizhar, Vaazhiya Bharata Manittiru Nadu’ (Rule, golden Tamil! Flourish, the good Tamil people! Prosper, this divine gem called India!) Just the sort of thing to take everyone’s mind off the falling Sensex. For, truth is, without the occasional heat brought about by a bite of political mirchi or tamashas like Howdy Modi, the regime struggles to organically exude a feelgood spirit even among bhakts. 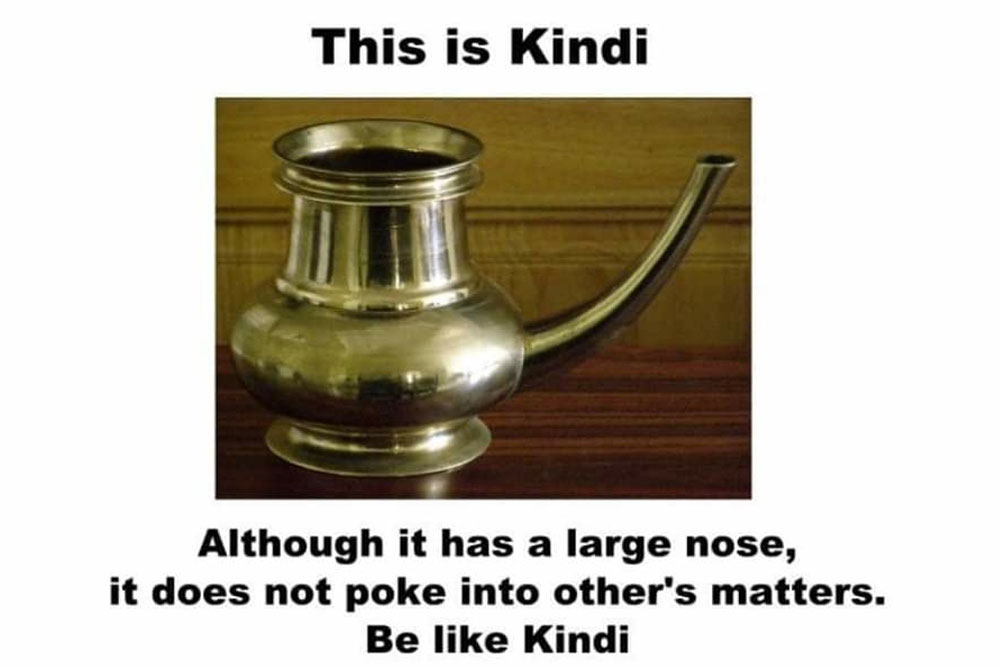 At a deeper level, the diversion also takes one down a real, intended path. Kashmir and NRC are very real, and impact millions of lives, as does cultural Hindutva. Talking of which, the last attempt had flopped quietly last week. ‘Final nail on the Aryan Migration Theory,’ headlines and banshee-like anchors had screamed for a few days. As the dust settled, the story had turned 180 degrees and the silence of a Harappan graveyard descended on that side of the spectrum. Now, Hindi comes as a sort of revenge. Almost saying, ‘Take this! If Harappa was not Sanskrit, at least Kadapa will be Hindi.” There’s really no conceivable reason to do this at this point in India’s social history: perhaps more people understand a bit of Hindi than at any point in the past. The soft power of Bollywood and TV media has seen to that. Even if it’s at the level of “Khet gaye baba, bajaar gayi maa”. Things have moved on from the time when my ex-colleague Ajith Pillai sent a new house help, a wide-eyed boy fresh off the train from Changanassery, to buy provisions in a Delhi market, after what he thought was adequate tutoring. The corner shop guy -- kinare waala dukaan, sorry, kirane ka dukaanwaala -- later told him how the encounter went. (The boy had blinked for a while, and then said: “Aurat ka dal de do.” Pronounced ‘ourat’, of course.) Yes, unlike the Out of India theory, which got interred quietly in Cemetery H, this one seems fated to go down in hoots of laughter. A quasi-Tamil rendition of 'Hindi' as 'Kindi' itself drew hundreds of memes.

One tangential question. Do we need a national language that does not even have a name for itself? For the nth time, ‘Hindi’ is a Persian word. An exonym. It comes about from the s/h alteration that also gave us ‘Hindu’ and ‘Hindustan’…which are also Persian words. It’s the same linguistic phenomenon that turns our ‘Asura’ into their ‘Ahura’. That’s the Zoroastrian god, btw, and yes, their demons are called ‘devas’ -- they have horns on their head, and lurk in the bushes to harass virtuous people. 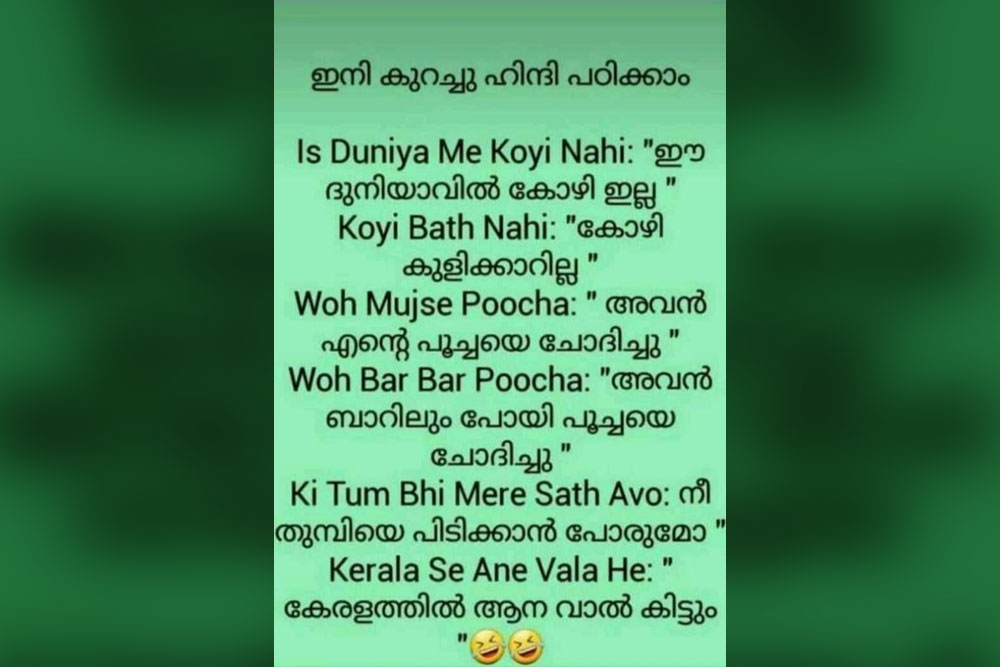 Second thing. Do we need a national language where yesterday and tomorrow are the same thing, as is day before and day after? My mother tongue, Malayalam, at least has distinct words for those four, before reverting to mirror-words. A tiny language in Garhwal that I researched many moons ago has distinct words for five days ahead of us and behind us. It’s this linguistic richness of India that we will kill with Hindi imposition. Literally. An abiding memory from my field trip is that of a Hindi schoolteacher, posted in those hills from Ghazipur, sadistically caning a boy for speaking his mother tongue in school. I, for one, still count in Malayalam -- the way my mum taught me before school in Delhi. ‘Do guni chaar batte ninyaanve’ just doesn’t cut it, whatever it means (perhaps the GDP).

Third question. Teesra sawaal. What and which Hindi are we talking about? Do you read the news? In the alleged ‘Hindi heartland’ of Uttar Pradesh, some 10 lakh students failed -- yes, failed -- at Hindi in the Class 10 and 12 exams this summer. The situation was as bad when I wrote a piece on India’s small languages back in 2002. Why do apparently Hindi-speaking kids fail at Hindi? This is not Tuticorin, after all. Well, if you knew anything about the real linguistic life of India, you wouldn’t ask. 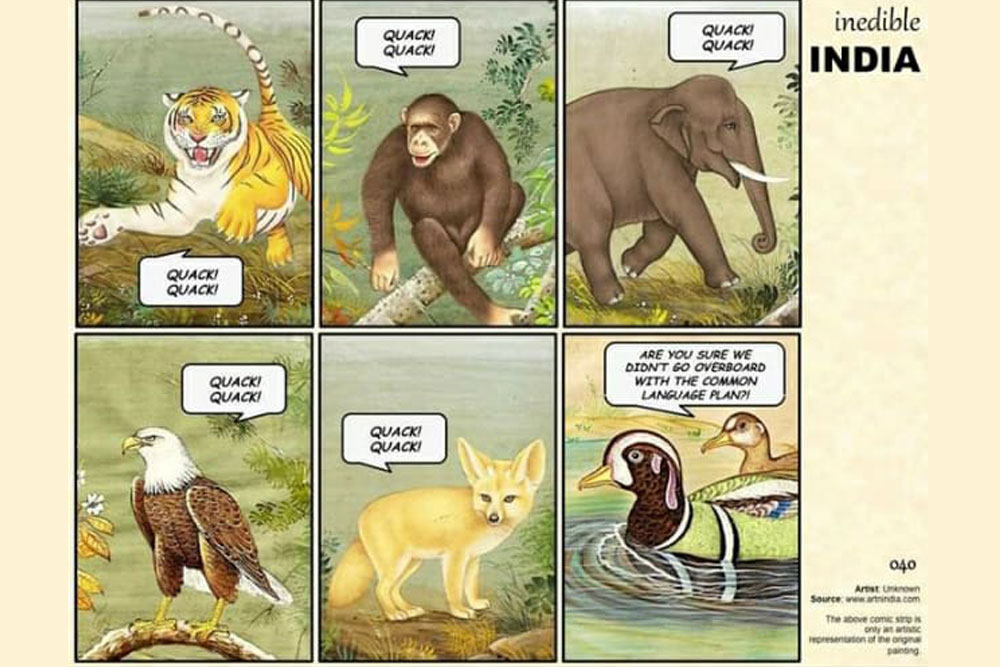 Fact is, the ‘Hindi belt’ is an official concoction. A figment of the nationalistic imagination that’s then turned into a self-fulfilling prophecy. How? Through an education policy that’s just a byword for forcible conversion. Let one thing be very clear. The hegemony of official Hindi does not imperil Kannada or Bangla so much as it does its own elder siblings -- start with Marwari, Dhundhari, Mewari, Mewati, Shekhawati, Ahirwati, Bhili, Bagri…that’s just a quick snapshot of Rajasthan. In Outer Delhi, they’ll say “solle haath”. Miles down, they’ll say “jemne haath”. Know what it means, dear Hindi speaker from Banaras? Would you take the right turn on the road in rural Bharatpur if you can’t tell between “jemne” and “khere”?

Before anyone dares mention the word ‘dialect’, let one thing be clear. Braj bhasha was a bhasha, an old spoken and literary idiom. And Khadi boli, the form from which modern, standard Hindi is taken, was a boli (dialect). To reprise the old maxim, “A language is just a dialect with a gun in its hand.” Grierson, who led India’s first Linguistic Survey, had adjudged Marwari to be more distant from standard Hindi than even Punjabi. The only reason Punjabi and Gujarati are ‘languages’, while Marwari is getting asphyxiated as a ‘dialect’, is political. Just look up the history of Marwari literature. What we are conducting is mass linguicide.

And not just there. It’s estimated that only about 20 per cent of the alleged Hindi belt speaks Hindi as a mother tongue. (Why do you think kids in UP would fail at it otherwise.) Across that map, we can see close cousins and distant uncles and aunts. First, the big ones nearby. Braj, Awadhi, Maithili, Bhojpuri, Magahi…to say any one of them “is Hindi” is to say German is English. The distant, avuncular ones include Kumaoni, Garhwali and all its Pahadi siblings in Himachal, not to speak of the small but rich Tibeto-Burman languages on the upper reaches. Remember, mass linguicide.

Coming back to the Bihari antecedents, to Maithili and going up to Awadhi in UP, it’s possible to draw a strong kinship to Bangla and all the eastern languages that bear the genetic imprint of Magadhi Prakrit. Suppose the British never shifted their capital out of Calcutta. And it was deemed necessary to turn Bengali into the national language. It would have been perfectly possible to construct a ‘Bangla belt’, throwing in Maithili, Awadhi, Magahi, Odiya and Assamese, with as much justification, or lack of it.

Fourth and last point. Which Hindi do you mean? Remember comedian Johnny Walker’s inverted quip…“ab samachar mein Hindi suniye”? That goes back to a whole history of ill-advised attempts to create a genetically modified Hindi. Dating from the first Hindi evangelist Bhartendu Harishchandra’s bid to de-Persianise and re-Sanskritise Hindi. (Fact: there was never any pure Sanskritic Hindi, it was born of the same womb as its Siamese twin, Urdu.) It reached its idiotic heights in Nehru’s time, with a stream of calqued words. Remember that outright hoot of a word, ‘lohpath gamini’ for train…whereas real Hindi wisely made ‘rail’ a native word.

Which Hindi? It’s a real question. At an underground Delhi Metro station, one day I noticed the word for destination: “gantavya sthaan”. I asked the first lot of passengers if they knew what it meant. “Of course,” said a gent with a tuft at the back of his head, “destination”. On further enquiries, he turned out to be a Sanskrit PhD who’s bringing home the bacon plying some astrology.

A more real encounter between the unreal official Hindi and the people of north India -- from UP, Bihar et al -- came a few days later. I’d just come out of a modest lunch (curd rice at A2B, if you insist) when I saw this signboard outside a dull government office, where autos were parked: kanishtha abhiyanta. I asked at least 20 people, all ‘Hindi beltians’. None of them knew what it meant. Finally, a smart autowaala went closer and read the English: “junior engineer”. Is this the proposed national language, which even locals can’t wrap their heads around?

Bombay, with its fine Hindi-evangelist history, would faint…even if the Thackerays are now known to have originated in Bihar. So would Delhi. Poor Punjabi BJP/RSS types like M.L. Khurana and Arun Jaitley anyway spent their lives learning to say ‘dwaar’ instead of ‘darwaaza’ and ‘prayatn’ for ‘koshish’, which all ordinary humans say. Not to speak of L.K. Advani. Once, pontificating on the state of the country, he said: “Desh ka vaayumandal kharab hai.” Vayumandal! A literal translation of atmosphere, when perfectly kosher words like ‘vaataavaran’ were available, even if he wanted to avoid what would come naturally to him: the Urdu ‘mahaul’.

Rewind to the past. Remember a time when, on Doordarshan, they used to say things like “shoonya kaal”? Such and such MP said something during “shoonya kaal”! Sounded fairly apocalyptic, till you realised it was just a ludicrous word-for-word calquing of Zero Hour. There are things this piece does not touch upon: to wit, what should a sane education policy be like? And what should the medium of instruction be? For now, we revert to someone on Twitter who said, people should be able to speak whichever language they can best express their love in. Urdu/Hindi (they are pretty much the same thing, with lexical/stylistic variations) will naturally draw in people with poetry. With the stiff, goose-stepping prose on offer now, the idea can only be to make more people hate it. 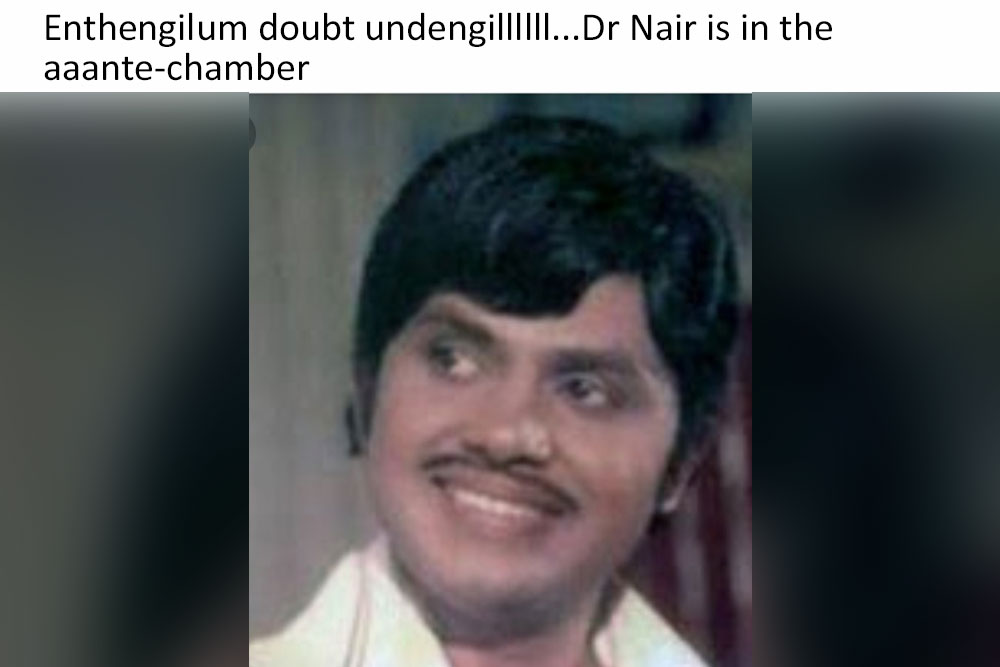