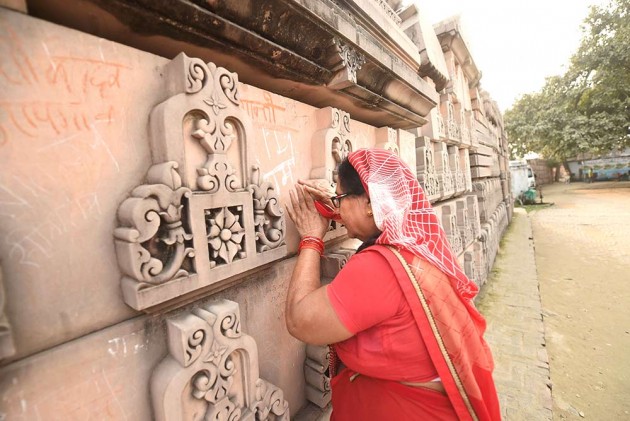 In a week from now, prominent leaders and saints will descend on Ayodhya to participate in the bhoomi pujan for the Ram Mandir at the site of the demolished Babri Masjid. Prime Minister Narendra Modi will be present at the ground-breaking ceremony along with other leaders, including Uttar Pradesh chief minister Yogi Adityanath.

Principal architects of the Mandir movement – Lal Krishna Advani, MM Joshi and others – have been invited too. It isn’t clear whether former Chief Justice of India and now a Rajya Sabha MP Ranjan Gogoi, the man who presided over the legal adjudication of the century-old title dispute, will grace the occasion or not.

What is abundantly clear though, is that the Trust empowered to oversee the construction of the Ram Mandir and then supervise its day-to-day affairs hasn’t extended an invitation to anyone from the Congress party. Even interim Congress president and the party’s only Lok Sabha member from Uttar Pradesh, Sonia Gandhi, has not been invited. But then, for a Trust that is ostensibly packed with members hand-picked by the BJP-led ruling dispensation, the exclusion shouldn’t surprise anyone.

Interview | Babri Masjid Is A Mosque And It Will Always Remain As One: Asaduddin Owaisi

For a party that claims to be a guardian of the secular values enshrined in the Indian Constitution, the exclusion of its leaders from the guest list of the ‘historic’ event should have actually come as a relief to the Congress. The bhoomi pujan itself should have given cause to the Congress to demand vociferously that the event, inevitable as it is in light of the Supreme Court’s verdict in favour of the temple, should at least be deferred till a trial court hearing cases against BJP-RSS leaders for their role in the destruction of the Babri Masjid delivers its verdict.

The hasty plans of the Trust to begin the construction of the temple at a time when the country is still grappling with an unprecedented health pandemic should have also given the Congress a reason to build pressure on the BJP-led UP government to expeditiously identify and release the five-acre plot to the Sunni Central Waqf Board as part of the Supreme Court-mandated restitution for the destruction of the Babri Masjid. The Congress should have also questioned, even if the answer is widely known, why the Prime Minister was attending a religious event; particularly one that would reignite ghastly memories of bloodshed and communal pogroms.

The Congress could have done all this, and then some more. Yet, it is silent. The few murmurs within the party over the bhoomi pujan are largely about the egregious exclusion of its leaders from the list of invitees or about the Trust being full of BJP/RSS members or that the event has no meaning because the temple’s ground-breaking ceremony had already been carried out in 1989 when the late Rajiv Gandhi-led Congress government at the Centre allowed the shilanyas in Ayodhya.

Also Read | Opinion: Ayodhya Isn't A Hindu-Muslim Dispute; It's A Battle Between Communal And Secular Forces

A miniscule minority of leaders in the party, likes of former Union minister Salman Khurshid, believe that any political slugfest on the Ram Mandir is now pointless for the Congress and there “shouldn’t be a second round of competition between the BJP and the Opposition on the issue now” since the matter was given a finality by the Supreme Court. Others like Rajya Sabha MP Digvijaya Singh hope to keep politics away from the issue as the movement for the construction of the temple preceded the founding of the RSS or the BJP and “was a public movement”.

The deafening silence of the Congress, or its eagerness to put the issue behind, is perhaps a natural corollary to the Janus-faced role that it played through the Mandir movement, particularly from 1986 onwards right up till the destruction of the Babri Masjid. Rajiv Gandhi’s abject surrender to hardline Muslim clerics following the Supreme Court’s landmark Shah Bano verdict and his government’s decision to reverse it had given political leaders of the then fledgling Hindu right an opportunity to revive the long dormant Ayodhya dispute way back in 1986. In an attempt to neutralize the charge of Muslim appeasement, Rajiv gave in to demands from members of the BJP/RSS combine and other Hindu outfits to open the locks to the disputed site in Ayodhya and allow the Vishwa Hindu Parishad (VHP) to perform the shilanyas for the Ram Mandir. Events of 1986 and 1987, as recounted by former Union home secretary Madhav Godbole in his seminal book, The Babri Masjid-Ram Mandir Dilemma—An Acid Test for India’s Constitution, display a lack of will and initiative on Rajiv’s part to prevent events that ultimately led to the demolition of the Babri Masjid.

Godbole reproduces letters written to Rajiv by leaders from across the political spectrum, each offering a seemingly workable settlement formula. Godbole recounts that even in May 1989 – six months before the shilanyas was performed – Atal Bihari Vajpayee had informed then Union home minister Buta Singh that the site should be handed over to Hindus, who as a goodwill gesture, “should maintain the Babri Masjid as it is without there being any worship by either community” and that a “temple and a mosque should be built nearby the disputed shrine”. Godbole went to the extent of calling Rajiv “the second most prominent karsevak, after (K.K.K) Nayar, the district magistrate of Faizabad, who encouraged the clandestine placement of the Ram Lalla idol in the Babri Masjid on 22 December 1949.”

It was the Rajiv administration’s nod for opening up the locks to the disputed site that acted as a catalyst for the Sangh Parivar’s Ram Janmbhoomi movement. When Advani’s rath yatra (chariot race) built up mass hysteria among Hindu radicals who eventually demolished the Babri Masjid, another Congress-led government was at the Centre under P.V. Narasimha Rao, who many political observers have since accused of doing little to prevent the karsevaks from executing their stated plan.

Over the past six years, as a sense of religious intolerance permeated across large parts of India, the Congress praxis of speaking up for secularism while flaunting the temple-hopping, janeu dhari, Shiv bhakt, Kaul Brahmin credentials of its past and future leader provided no succour to religious minorities who once looked up to the party as a custodian of their interests. Religious minorities, secularists or rationalists thought the younger and supposedly more politically astute sibling of this Shiv-bhakt leader, who is now leading the party’s revival plans in Uttar Pradesh may be different. After all, she took a strong position against the evidently discriminatory Citizenship Amendment Bill and recently wrote to Adityanath demanding justice for the incarcerated Dr. Kafeel Khan. However, with assembly polls due in UP in early 2022 and no credible signs yet of her revival plans paying off, she too seems to have no position on the Mandir quagmire. One of her key aides in the state is busy wooing Brahmins with his newly launched Brahmin Chetna Parishad even as rumours circulate about the longevity of his stay within the Congress. Evidently, any statement by the Congress that can be construed as a hurdle in the way of the Ram Mandir won’t be politically correct in such circumstances.

Reduced to a caricature of its former self, the Congress makes the right noises about a dire need to preserve India’s historic syncretism but if its narrative finds few takers, the party has only its own duplicity to blame. The Congress party’s silence on the Ram Mandir’s bhoomi pujan or its pusillanimous response to the verdict that enabled the temple’s construction is motivated not by guilt over past acts of omission or commission in this communal tragedy but by purely political motives. It’s a silence that is deafening.