Chronology Is Clear: MPLADS Abolition Leaves MPs At The Mercy Of Centre 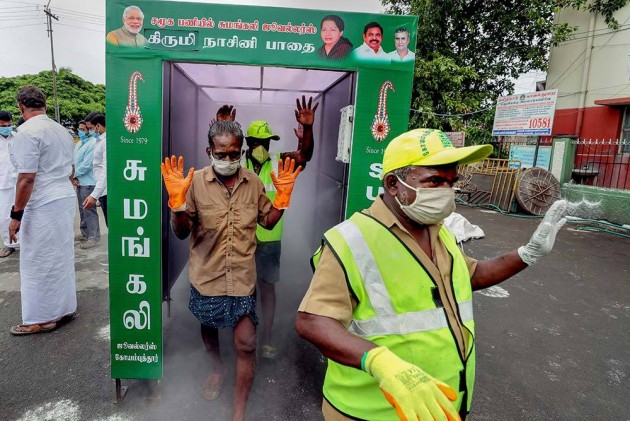 At the meeting of the Union cabinet, chaired by Prime Minister Narendra Modi on April 6, two key decisions were taken, ostensibly, to raise funds for India’s fight against the coronavirus pandemic while also sending out a message that our lawmakers were prepared to make a personal sacrifice for the larger cause.

The first decision – all parliamentarians, the prime minister and his ministerial colleagues included, will take a 30 per cent pay cut – has been hailed as a step in the right direction by politicians cutting across party lines. The second – suspension of the centrally sponsored Member of Parliament Local Area Development (MP-LAD) scheme for a period of two years – has been variously panned by Opposition members as “whimsical”, “unilateral”, “sinister” and “undemocratic”.

Before we get to the opprobrium over the Centre’s decision to scrap the scheme for 2020-2021 and 2021-2022, it is pertinent to understand the purpose with which the MP-LAD fund was started in 1993. The MP-LAD scheme, controlled through the Ministry of Statistics and Programme Implementation (MoSPI), provides parliamentarians with funds they can utilize for developmental works and building community assets within their constituencies (in case of Lok Sabha MPs). A Rajya Sabha MP can use this fund for similar work in any district within the state that (s)he has been elected from while a nominated member of the Upper House can allocate this money for projects in any district across the country. The lawmakers can also contribute up to Rs. 25 lakh from this fund towards the chief minister’s relief fund in case of a natural calamity in a state or up to Rs. 1 crore towards a central relief fund such as the Prime Minister’s National Relief Fund during a natural disaster not confined to a single state. The expenditure of the MP-LAD is audited by the Comptroller and Auditor General (C&AG) and for each work executed through this fund, it is mandatory to provide a utilization certificate. There is also a cap on how much money can be released for an individual project. The allocation towards MP-LAD is uniform for all lawmakers – currently pegged at Rs. 5 crore annually and released in two instalments of Rs. 2.5 crores each – and the fund is non-lapsable which means that if an MP fails to utilize the fund within a financial year, the balance is carried forward to the next year.

By suspending the MP-LAD scheme for two years, the Centre hopes to centralize with itself an amount of over Rs. 7800 crore which it would have otherwise had to allocate to the over 780 members of parliament. The purpose of this centralization, as one understands, is to provide the government with more funds that it can channelise towards relief efforts during the Covid-19 pandemic and the severe hit that the country’s economy is taking because of it.

On the face of it, Modi’s decision to appropriate MP-LAD funds for the Centre as an effort for fiscal consolidation to stabilize an already teetering economy now in the throes of an asphyxiating health pandemic seems noble. However, as all actions of a government must be looked at not in isolation but as a continuum and analysed collectively, the move to scrap the MP-LAD scheme for two years must stand the same test. And, this is where the censure reserved for the decision by Opposition members seems to find merit.

To use a word that seems to have now become a potent witticism in the political semantics of the average Indian, the ‘chronology’ preceding the Centre’s decision tells a tale of its own.

Of course, the roots of this fiscal measure can ultimately be traced all the way back to the mismanagement of the economy that the Centre has repeatedly been accused of by Opposition members, economists and a former RBI Governor over the past six years. But then, let us limit the narrative to the Centre’s handling (or lack of it) of the Covid-19 pandemic and its immediate economic fallout.

As is now evident, the Centre woke up late to the urgent attention that the pandemic required even before the first few cases of Covid-19 were tracked in India. Despite several Opposition members, most prominently Congress MP Rahul Gandhi, repeatedly urging the Centre for better preparedness to fight an imminent Covid-19 spread in India, it was not until March 19 that the prime minister gave a glimpse of the urgency needed for the battle ahead. It cannot be emphasized enough that by the time Modi gave his call for a daylong Janata Curfew, over 80 Covid-19 positive cases had already been reported from different parts of India. The Union health ministry, till just a few days before the Prime Minister’s first address to the nation, maintained that there was “no health emergency”.

Within the next five days, India plunged from being in a state of “no health emergency” to one under complete lockdown with lakhs of migrant workers stranded on the roads without money or food, medical professionals at the frontline of combating the pandemic complaining of lack of personal protective equipment (PPE) and state governments requesting an urgent release of financial dues from the Centre to better equip them with funds to deal with the crises.

In the midst of this hara-kiri, the Centre inexplicably issued a notification on March 20 – just a day after Modi’s Janta Curfew call – amending the land use of five plots spread across a four square kilometer area between the Rashtrapati Bhawan and India Gate to facilitate the construction of its Rs. 20,000 crore vanity project, the Central Vista. On March 24, when the Prime Minister announced a Rs. 15000 crore allocation for strengthening the country’s health infrastructure, the irony of a greater fund allocation for the Central Vista despite obvious constraints on the Treasury would not have been lost on anyone. Predictably, calls for scrapping the Central Vista projects have grown louder with Congress president Sonia Gandhi also joining the chorus now.

The Centre announced a Rs. 1.75 lakh crore financial package to help the poor and deal with the economic crisis that the pandemic has unleashed. Despite the substantial size of this largesse, rights activists, economists and Opposition leaders weren’t impressed. Economists Jean Dreze and Jayati Ghosh have claimed that even by a conservative estimate, the minimum stimulus required to offset the economic catastrophe threatened by the coronavirus is Rs. 3.75 lakh crore. Former finance minister P. Chidambaram puts this mark at an even higher Rs. 5 lakh crore.

Evidently, the Centre is finding it difficult to raise the financial muscle needed to defeat the economic horrors that the pandemic portends. The prime minister, thus, launched a new public charitable trust – Prime Minister’s Citizen Assistance and Relief in Emergency Situations (PM-CARES) fund. Details of how this fund will be utilized and audited, whether like the Contingency Fund of India the PM-CARES too will have a cap on its total value, how it is different from other relief funds such as the Prime Minister National Relief Fund (PM-NRF) or the National Disaster Relief Fund (NDRF) are still unclear.

Despite the opacity around PM-CARES, the Prime Minister exhorted citizens to donate generously to this newly constituted fund and not towards existing imprests such as the PM-NRF, NDRF or the chief minister’s relief fund in different states. As our collective experience with the PM’s call for clapping from the balconies or lighting candles and diyas as a mark of unity against the pandemic has amply demonstrated, lakhs of citizens obliged. Industrialists, actors, sportspersons, businessmen donated generously to PM-CARES. Over 300 MPs – almost all from the BJP – also pledged varying amounts from Rs. 50 lakh to Rs. 1 crore from their MP-LAD fund to PM-CARES.

A number of MPs from the Opposition, however, chose to not contribute from their MP-LADs to PM-CARES and preferred making donations to the chief minister’s relief funds in their respective states or set aside allocations for relief operations in their respective constituencies. From setting up community kitchens to feed those stranded because of the lockdown to allocating money for healthcare workers and distribution of masks or PPE, the MP-LAD funds became a major source for Opposition members to directly provide financial relief during the pandemic – of course without digging into their own pockets for the purpose. And this is when the Centre decided to scrap the scheme for two years.

It is not difficult to gauge why Opposition members are now up in arms against the Centre for taking away the one resource they had at their ready disposal for providing financial heft to relief measures. The fact that the scheme has been scrapped not for the immediate months that the pandemic is expected to last but for a period of two years only adds insult to injury.

It is true that several MPs do not fully utilize their respective MP-LAD funds during their term in Parliament. Official estimates by the MoSPI show that over Rs. 5200 crore in MP-LAD funds have been lying unspent over the past five years against the overall release of over Rs. 53700 crore during the period between March 31, 2015 and March 4, 2020. It is perhaps even possible that the current brouhaha by Opposition members would have been less shrill in its tenor had the government decided that this Rs. 5200 crore of unspent MP-LAD now stood lapsed and would be utilized for Covid-19 relief works while future allocations will remain unaffected.

The MPs have now been left at the mercy of the Centre to get funds for developmental projects in their respective constituencies that aren’t covered under any central, state or local civic authority level scheme. It is also unclear how an MP would fulfill his obligations towards the development works he has already promised to his constituents or release MP-LAD funds already pledged to ongoing projects. Several Opposition members suspect that while they will have to queue up before the government with a begging bowl, MPs from the ruling coalition will manage to get work done in their constituencies. And then there’s the other fear – too much criticism of the Centre’s decision to suspend the scheme will allow the BJP to claim that Opposition members have only their personal political interests in mind while the central government has asked for the sacrifice in the national interest. That’s a narrative we’ve all become familiar with in recent years every time a decision by the Centre is criticised.