Administrative decisions of a CJI form only a fraction of his legacy; a substantial chunk of it must emanate from judgments he has authored or been part of. And it is here that a stark contrast emerges between Dipak Misra and Ranjan Gogoi – both accused of doing the government’s bidding. 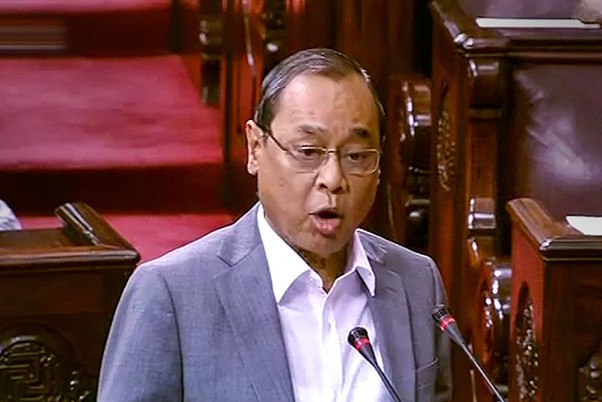 In the judiciary, an oft-repeated idiom is that judgments must speak but a judge must not. On January 12, 2018 when then Supreme Court judges – justices Jasti Chelameswar, Ranjan Gogoi, Madan B. Lokur and Kurian Joseph – called an unprecedented press conference to red flag serious concerns over administrative decisions taken by then Chief Justice of India, Dipak Misra, it was, in part, a breach of this long-settled idiom that triggered both shock and awe.

Up until that historic press conference, there had been muted rumours about Misra acting under pressure from the Executive. Misra’s decision to allot the sensational case concerning the mysterious death of judge B.H. Loya to a bench headed by Justice Arun Mishra, then among the apex court’s juniormost judges had many BJP critics and liberals wondering if cases that could potentially embarrass the ruling party were being allotted to a specific bench with the purpose of a predetermined verdict. Indeed, at the press conference, it was Misra’s decision – as master of roster – to assign the Loya case to the Justice Mishra-led Bench that Gogoi singled out for condemnation.

Accusations that Misra was working under duress were made by all and sundry. A section of the legal fraternity, the liberal-secular conglomerate and social media junkies all chipped in. In the nearly 10 months that punctuated the press conference and his retirement in October 2018, Misra was perhaps the most reviled CJI in the Supreme Court’s recent history. His critics would often speculate whether his refusal to stand up to the Executive’s interference with the Judiciary was borne out of post-retirement ambitions – chairmanship of a national commission, a Rajya Sabha berth or a gubernatorial posting like one of his predecessors – Justice Sathasivam. The more adventurous punters wondered if the post of Vice President or even President of India was on the table. Misra retired on October 2, 2018 after delivering a string of crucial judgments and that was the last one has heard of him since.

With Misra’s retirement, came in Gogoi as the new CJI. The messianic aura that Gogoi arrived with was naturally attributed to his participation in the judges’ press conference – the judge who had the most to lose since his elevation to the CJI’s throne could have been jeopardized on count of insubordination and misconduct. In the run up to his elevation, Justice Gogoi maintained that aura rather well – even famously talking of the need for “noisy judges” to defend democracy.

The thing with legacy of persons who have held the same office is that they are bound to be compared and appraised. If Gogoi believed that his self-praise of being a defender of democracy would immortalize him as a champion of the right causes while painting his immediate predecessor as being woefully inadequate for such plaudits, the honourable Justice clearly misjudged. Just four months after his retirement, Gogoi is now a Rajya Sabha member – nominated by President Ram Nath Kovind under his discretionary quota for ‘distinguished citizens’. The opprobrium that the nomination has kicked up is deafening and the public shaming of the former CJI toxic. Nonetheless, it is perhaps opportune to wonder if the much loathed Misra’s legacy needs a reappraisal. If Misra was a CJI reviled, does Gogoi present an image of one who beguiled?

Misra was ridiculed for failing the test of administrative due diligence during his stint as CJI. As master of roster, he could have exercised better wisdom to allocate cases to judges commensurate with their seniority. He could have also pursued with greater rigour recommendations of appointment, transfer and elevation of judges that the Collegium under him made to the Centre. That he fell short of doing any of this is now Misra’s cross to bear.

Gogoi was a CJI under whose tenure the Supreme Court’s sanctioned strength of judges went up to 34 with the newly created vacancies filled up promptly. Recommendation of judicial appointments made by the Gogoi-led Collegium – irrespective of the controversies they occasionally triggered on counts of opacity and nepotism – were notified by the Centre without losing much time. There seemed to be equitable allocation of cases to benches led by judges of varying seniority. At the same time, the manner in which Gogoi allocated cases to the bench he helmed as CJI – be it the one involving allegations of sexual misconduct against himself or why he chose to sit over petitions that challenged abrogation of Article 370 but fast-tracked the Ayodhya title suit – raised many questions, answers to which are now being speculated with his entry into the Rajya Sabha.

Administrative decisions of a CJI form only a fraction of his legacy; a substantial chunk of it must emanate from judgments he has authored or been part of. And it is here that a stark contrast emerges between Misra and Gogoi – both accused of doing the government’s bidding.

Any objective appraisal of Misra’s stint as CJI must take into account that despite allegations leveled against him of pushing the government’s agenda through judicial pronouncements, his verdicts furthered the cause of social justice, particularly for sections of the society which the BJP is accused of discriminating against. Just a cursory glance of the judgments Misra, or a bench headed by him, pronounced over the last few months – particularly the final fortnight – of his tenure as CJI would bear this out.

At a time when political and social discourse in the country revolved around the sudden spike in communal/casteist hate crimes and lynch mobs, it was a bench headed by Misra that laid out stringent guidelines for the Centre and state governments to control the menace. Ironically, during Gogoi’s tenure as CJI, when petitions were moved before his bench for urgent hearing of how the SC mandated guidelines against mob lynching were being flouted by some states, they were rarely listed with the urgency they deserved.

Also Read | 'Scar On Judiciary': What Ranjan Gogoi Said In 2019 On Post-Retirement Appointment Of Judges

For a CJI accused of being pro-government, it is pertinent to point out that when the Ram Janmabhumi-Babri Masjid dispute was listed before his bench, Misra asserted that it be heard by a three-judge bench and “only as a land dispute” without any reference to constitutional matters. Of course, the matter was never resolved during his tenure and he was accused of dilatory tactics. When Gogoi took over as CJI, he not only decided to constitute a constitution bench to hear the matter without such a reference by any party but also indicated, as is evident in the Ram Mandir verdict, that the case at hand was not a mere property dispute. Gogoi can be hailed for bringing curtains down on the century-old case but legal soundness of the verdict which awarded the land parcel to Lord Ram after acknowledging that the demolition of the Babri Masjid was an “egregious lapse” will be hotly debated for posterity.

As CJI, it was to Misra’s credit that his bench de-criminalised consensual homosexual acts by substantially watering down Section 377 of the Indian Penal Code and, in another verdict, struck down the IPC provision that made adultery by a woman a punishable offence – in the verdict that Misra authored, he asserted that “it is time to say that the husband is not the master of a woman”.

It was also the constitution bench headed by Misra that allowed entry of women into Kerala’s Sabarimala Temple. When review of the Sabarimala verdict was sought, Gogoi pulled a surprise by clubbing together all cases of gender discrimination across religions and directing that a larger constitution bench be formed by his successor to determine the outcome.

Now look at Gogoi’s tenure as the CJI. Yes, he made for a noisy judge but the noise was, more often than not, reserved for those who came to his court demanding justice. In the initial months of his tenure, Gogoi brusquely turned down requests by petitioners who sought urgent hearing of their cases or complained that their petitions were not being listed. The former CJI was famously told by Attorney General K.K. Venugopal that petitioners were not traveling long distances to come to the Chief’s court only to be turned away rudely. But this seemed to be only a minor lapse on Gogoi’s part for what followed during the remainder of his tenure.

Gogoi’s scant regard for established judicial dictum – nemo judex in causa sua (no one is judge in his own cause) – was evident when he presided over the matter concerning allegations of sexual misconduct by a Supreme Court staffer against him. His social identity as an Ahom and Assam domicile being evidently in conflict with the Assam NRC matter did not deter Gogoi from aggressively pushing for updation of the citizens’ register which ultimately left over 19 million Assamese people stateless. When petitioner Harsh Mander urged Gogoi to recuse himself from hearing the case, Gogoi lost his famous temper and struck Mander’s name off the petition. His handling of the Rafale petitions which had the potential of embarrassing the Centre over the controversial fighter jet deal was among the most dubious highlights of his CJI stint – more so when he invited Prime Minister Narendra Modi to a dinner for BIMSTEC judges in the Supreme Court campus during the pendency of the case and held a one-on-one meeting with him despite Modi being personally named as a respondent in one of the pleas.

That Gogoi had outdone Misra in cozying up to the government was an allegation that had picked momentum when the bench led by him absolved the Centre of any misconduct in the Rafale deal. With the Ayodhya dispute settled in favour of the Hindu parties, Gogoi’s entry into the Hindu-right Hall of Fame had been guaranteed. It is thus no surprise that former Delhi High Court judge, Justice A.P. Shah saw Gogoi’s Rajya Sabha nomination as a “blatant and brazen quid pro quo”. It should also not come as a surprise if Gogoi’s first reaction after being nominated to the Rajya Sabha was to accept it “for greater cohesion between the Legislature and Judiciary”; a brazen admission of intent to demolish the settled doctrine of separation of powers as enshrined in the Constitution.

Meanwhile, there is no word of a post-retirement sinecure for Misra.

Taking Up Hijab Against Coronavirus