Dismantling Sheikh Abdullah’s Legacy One Historical Step At A Time

Not even the National Conference lifted an eyebrow when Sheikh’s birth anniversary was removed from the list of 2020 holidays. 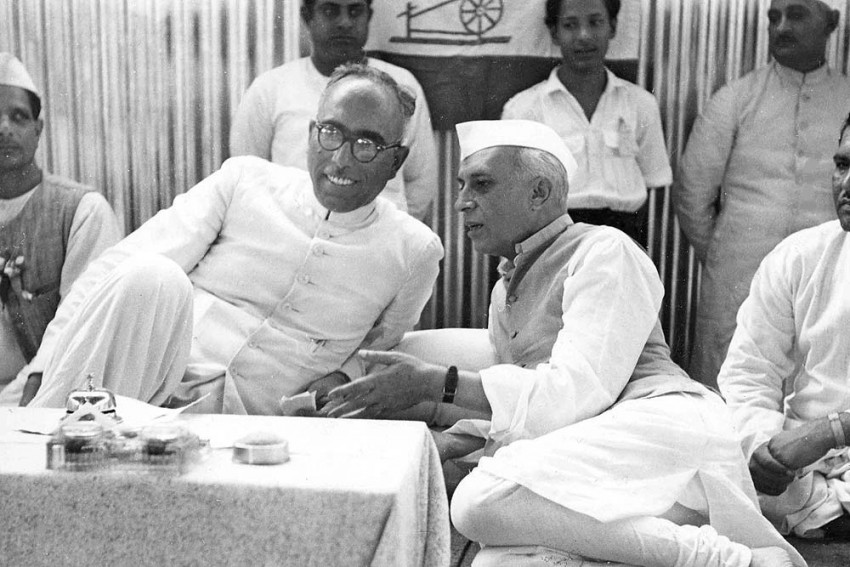 The first blow to Sheikh’s cult figure came in the mid-eighties, through an unusual source. Mustafa Akkad’s ‘Lion of the Desert’ was screened in various cinema halls in Jammu and Kashmir. Even those, not in the habit of watching movies, walked to the cinema halls in the Valley.

It is said that after the first show of the film, young men, who came out of Regal and Palladium Cinemas in Lal Chowk, threw stones at the Sheikh Abdullah’s life-size posters outside the National Conference’s office at Mujahid Manzil. Some say they tore down the posters of Sheikh. This was unheard of.  ‘Lion of Desert’, featuring Anthony Quinn, is based on the life of Libyan revolutionary leader Omar Mukhtar who fought against Italian forces.

Since 1930s, this was the first time that Sheikh’s political outlook was challenged openly. Hereafter, Sheikh, the tallest and legendary leader of Kashmir became just a tall man for a substantial section in the Valley. This section believed that Sheikh betrayed the people of Kashmir -- first for the Prime Ministership in the late 1940s and later for the Chief Ministership in the 1970s.

The defiance of aged Omar Mukhtar struck a chord with the young generation of 1980s. They started weighing Sheikh’s legacy with that of Omar Mukhtar’s struggle, coming to the conclusion that Sheikh was no Mukhtar. Some of the boys who tore down the posters later went across the border for arms training and opened the first chapter of armed militancy in the region.

In September 1989, Jammu and Kashmir Liberation Front gave a strike call on Sheikh’s death anniversary, announcing that September 8 be observed as the day of deliverance. That day’s report carried by the Kashmir Times, said that Mirwaiz Moulvi Farooq accuses Sheikh of being “consistent in his blunders right from 1938”.

The late Mirwaiz also held Sheikh responsible for inviting the Indian Army to Kashmir in 1947. On December 5, 1989, on Sheikh’s birthday, the JKLF asked people to hoist black flags to mark Sheikh’s birthday, calling for it to be observed as a “black day”.

In the coming years, things changed in the Valley. Security Guards were put at Sheikh’s grave, fearing it could be attacked by the people, who accuse him of “giving Kashmir to India on a platter”. Their argument was that Sheikh was so big a leader that he could have chosen different destination for Kashmiris and Kashmir. Sheikh’s grave continues to have guards.

For 30 years, successive governments in Delhi and Srinagar would swear by Sheikh, asking those who had “strayed” to follow the Sheikh’s path. On his anniversary, separatists would give strike calls and the National Conference and the government would come up with long statements eulogising Sheikh, arguing how his decisions in 1947-48 proved that Kashmiris preferred secular India over Pakistan.

Even before her arrest, former Chief Minister Mehbooba Mufti would give examples of Middle East countries and infighting within Pakistan between different Islamic groups to argue that Sheikh’s decision to side with India in 1947 was the best thing that happened to Kashmiris.

But things have changed. Delhi has abandoned Sheikh. The J&K government has removed his birth anniversary from the holiday list. The government removed Sheikh’s political legacy when it revoked Article 370 and arrested his son Dr Farooq Abdullah, and grandson, Omar Abdullah.

Mehbooba Mufti is in custody in a house which once used to be the official residence of Prime Minister Bakshi Ghulam Mohammad. And her father, Mufti Mohammad Sayeed, when he was the chief minister, used the same residence as the chief minister’s house. Mufti Mohammad Sayeed, in spite of being a political opponent of Sheikh and National Conference, would always praise Sheikh for siding with India.

We don’t know whether architects of “new Kashmir”, who are out to dismantle Sheikh’s legacy from Kashmir, have seen ‘Lion of Desert’. But the irony is Omar Mukhtar is no longer the favourite in Kashmir. People here have developed new tastes after August 5, the day Article 370 was abrogated amid communication blockade and siege.

Pessimists are reading more and more about the siege of Sarajevo while fearing worst in Srinagar, while optimists, whose number has gone up, are watching Ertugrul. This Turkish historical fiction and adventure television series, created by Mehmet Bozdag, starring Engin Altan Duzyatan, is the ‘in thing’ in the Valley these days.

The TV series is about the life of Ertugrul, the father of Osman I, who was the founder of the Ottoman Empire. No one in the Valley, even in the National Conference in the Kashmir, lifted an eyebrow when Sheikh’s birth anniversary was removed from the holiday list of 2020. Perhaps the NC too is watching Ertugrul.