One in every third woman (30%) in India has experienced domestic abuse since the age of 15. 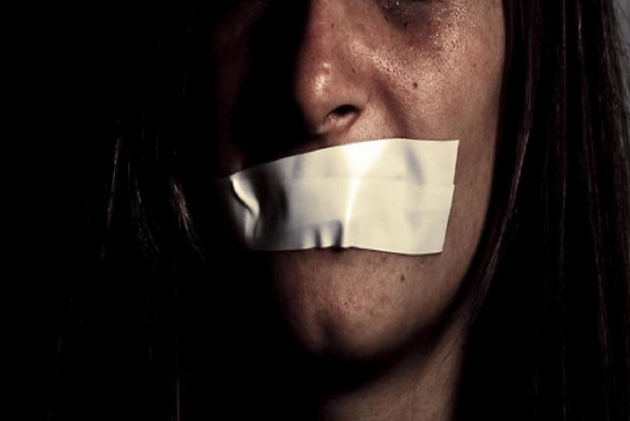 The form said “left eye.”  But where was the globe? I saw the mauled contracted pieces and disproportionate blood in the container.

Slipping the slides under the microscope a few days later I saw there was the eye, alright. Choroid, sclera and retina. All parts of the eye: Mangled; Unbelievably distorted; Brutally assaulted. The tell-tale scars of dense fibrosis. Haemorrhage and neovascularisation (new blood vessel formation).  No tumour.

The pleasant surgeon on the phone thanked me for calling. Phthisis Bulbi or end-stage eye disease, I told him, with no tumour. I had been careful and examined multiple fragments, I said – after all that’s probably what they wanted to exclude in this young lady, right, I reasoned.

Ahh, he said, not concerned about tumour at all. Doc, in fact we’ve tried several surgeries to correct her vision. The domestic abuse, unfortunately, was too severe this time...

His voice trailed with the narrative and as I put the phone down I could almost taste the vomit in my mouth. The words “this time” echoed relentlessly.

A 22-year-old.  What hopes and aspirations might she have had, I wondered.

The first time the blow might have taken her by surprise.

I’m sorry, he said. She ought to have known he didn’t like her staying out late. She wouldn’t do it again, she said as she hugged him tight.

The second time she felt the sting a little harder.

Her lip bled a little, the next time. That’s alright she told herself. Nothing a little makeup couldn’t fix. He bought her flowers. The ones she loved.

The third time her right ear stung so hard.

She felt the ringing first. And then nothing. She had to make do with the other.

She stopped wearing short blouses as the days went by. She needed to cover her bruises. She has given up her career and job when she got married and had to ask her husband for money to buy her personal items.

She continued to smile. Laughing was painful as a rib had cracked. That was the time she had tried to fight back. She never tried hitting back again.

Her smiles waned when she laughed. She had to endure the falseness, the pretence. Love had turned to loathing and fear a while ago. She recalled how his temper had flared when they were dating but hadn’t thought much of it at the time. He was the only man she had ever dated or loved.

Trying to avoid her good-hearing ear, she exposed her left ear. However, the swerve cost her. The black eye lasted for days. Like a weak boxer knocked out in round one.

The moves by the opponent were calculated. He’d reach out for the same eye, again and again.

There was a wedding in his family coming up. She dreaded the visit to the ophthalmologist. I fell down, she said. The nurse never said a word. Neither did the doctor. She saw them exchanging glances. Did they know, she wondered.

She had collapsed on the bed. She was tired. She had slept on her good ear and didn’t hear him come in. When she came around all that she could see was his face directly in front of her.

Why did you make me wait outside for hours, he yelled. She was powerless and still groggy from the painkillers of the morning procedure at the clinic.

She vaguely saw the wrought iron book-end that swung down mercilessly. Surprise for a fraction of a second and then complete blackout.

Domestic violence/abuse or Intimate Physical Violence (IPV) occurs within a relationship that affects women and men, adults and children, married and unmarried, current spouses and ex-partners, pregnant and non– pregnant, emotionally stable and mentally challenged, educated and uneducated, rich and poor,  Lesbian, gay, bisexual, transgender and straight individuals. No race is exempt. IPV can be isolated, repetitive or even span generations. Physical or sexual abuse is one of the components of domestic abuse which also encompasses social, emotional, economic and spiritual abuse.

One in every third woman (30%) in India has experienced domestic abuse since the age of 15. One in 10 Indian women has experienced sexual violence. Thirty-six per cent of Indian women have physical injuries such as bruises and cuts, 9% have eye injuries, were burnt or were the victims of acid attacks and 7% have deeper injuries. Only 2% of abused women have reported abuse to the police. The social framework of dowry contributes to increased domestic violence in India.

The sequelae of domestic physical abuse includes fractures, broken bones, injuries to the head, eyes, ears, abdomen and internal organs which can be severe, life-threatening and even result in the death of the victim.

The Protection of Women from Domestic Violence Act 2005 in India includes marital rape and dowry harassment demands as forms of abuse. The act does not protect men against domestic abuse.