Home  »  Blog  »  National »   »  Extra-judicial Killing Is Not Only Illegal, It Paints Khaki Uniform In The Colour Of Cowardice

Extra-judicial Killing Is Not Only Illegal, It Paints Khaki Uniform In The Colour Of Cowardice

I shudder to think if encounters – fake or carried out genuinely in the course of duty – can be justified purely as a means to stop criminalisation of politics; or as seems to be the prevailing theory in Vikas Dubey’s case – to prevent criminals in politics from being exposed, writes Ajoy Kumar 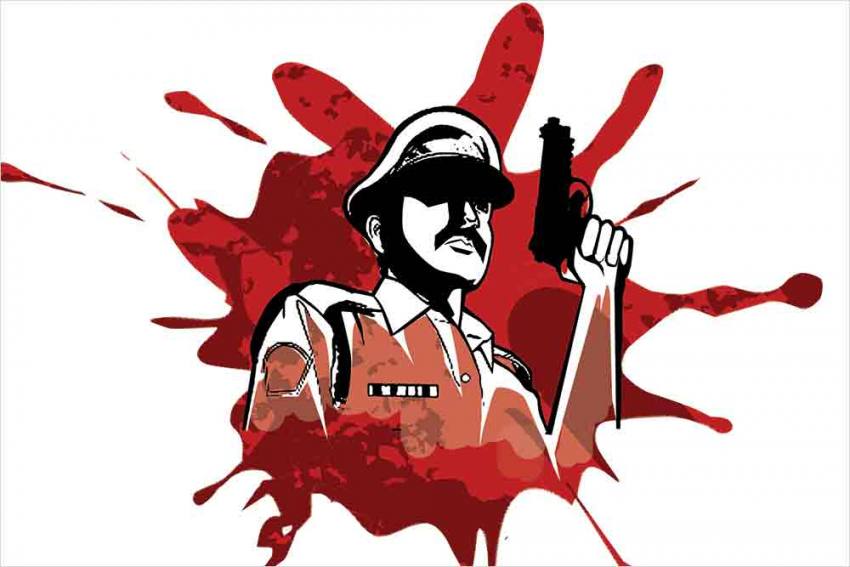 For representational purpose
Illustration by Saahil
Ajoy Kumar July 18, 2020 00:00 IST Extra-judicial Killing Is Not Only Illegal, It Paints Khaki Uniform In The Colour Of Cowardice

When I was a young Assistant Superintendent of Police (ASP) in Bihar in the 1990s, an incident taught me how ‘power corrupts and absolute power corrupts absolutely’. One December night, I got a wireless flash that the inspector of Vikram Police Station (Patna district) had been injured badly in a Naxal attack. I rushed to the spot to be with my men. Just as I reached the police station, I was informed that around 20 Naxalites had been arrested. What came next was something I hadn’t expected. Inside the police lockup – a 10 X 8 feet room – were packed 20 children, all below 14 years of age. I made my way to see the injured inspector at his quarters; also hoping that he’d enlighten me on what 20 children – the youngest being just 9 years old – were doing in the lockup. The inspector sat lazily at his quarters with his arm wrapped in a bandage and bathed in Tincture Benzoin. I had only recently graduated from a medical college and so, being a doctor besides an IPS officer, I insisted on seeing his injury. After much persuasion and the hint of a reprimand, the inspector agreed. The bandage was removed and with it unravelled an elaborate charade. The inspector did not even have a scratch. Subsequent questioning revealed that the entire story of the police-Naxal clash had been cooked up to get a Dalit hamlet vacated in return for a handsome consideration from some vested interests.

Also Read: Encounter Killings Of Criminals A Blot On Society, This Evil System Must End

The reason I relate this story today is because of a disturbing trend I see picking up across the country – common people baying for the blood of ‘criminals’ through extra-judicial killings and the police, irrespective of the state, happily obliging. I must concede here that as a young police officer, my favourite quote was ‘you can have either law or order but not both’. Thirty years later, I feel stupid and sorry for my naïveté and arrogance. I also realise that there will be people who may accuse me of belated self-realisation or of not speaking up when I was still a part of the police force. A celebrated former top cop had once told me that a good policeman shoots rarely but a great one, never. I am guilty of having ignored that wisdom during my stint in the police force but I do hope that serving and aspiring policeman won’t go down that path though the current trend presents an image of contradiction.

Since 2017, UP has reported over 5100 encounters in which over 100 ‘criminals’ were gunned down and nearly 1900 were injured. The UP chief minister, before taking the throne he presently sits on, was accused of crimes way more heinous than the ones for which several of those killed in these police encounters were wanted for. Most people killed in these encounters were petty criminals. Today, the UP police have proceeded to put known gangsters, those who thrived under political patronage and were thus privy to many secrets, in the firing line – the due process of law be damned. The killing of Vikas Dubey, in an evidently dubious police encounter, is a direct consequence of this trigger-happy attitude.

Also Read | Encounter Killings: When Truth Is Forever Banished To The Realm Of Conjecture

The police’s version of Dubey’s encounter is riddled with gaping holes. As a former IPS officer, I believe that this is deliberate. Notice how there hasn’t even been an attempt to make the encounter script sound plausible. I reckon that this is so because the police are showing their middle metacarpals to anyone who believes in the rule of law. The farce of the story is to intimidate you; the message is unambiguous – Kya Kar Logey.

As per available government records, India has witnessed over 1600 deaths under police and judicial custody. This figure, of course, does not include deaths in police encounters. In cases of police encounter, do not forget, it is often the police investigating the action of their own brothers in uniform. For deaths in police or judicial custody, the probe is carried out by the local civil administration. An intriguing detail often overlooked is that when the CBI investigates a police encounter or custodial death, a majority of the cases end up in policemen being charge-sheeted for the crime, if not convicted. Does this not call for the need to have an independent organisation – with a constitutional mandate and backed up by necessary resources – which can suo motu investigate every encounter and custodial death?

One of the police officers now entrusted with the enquiry of the Vikas Dubey episode had previously been indicted by the CBI in a fake encounter killing of a businessman dealing in the sale of medicines from Rae Bareli. The businessman’s parents, who were pursuing the case, also got murdered subsequently and the needle of suspicion had pointed towards police officers. Whether we talk of deaths in police custody or encounters, every time we let people who break the law getaway we also make India more unsafe and we make the police force nothing more than a Rottweiler of those in positions of power. An extension of this same malaise is policemen in UP shielding those involved in sexual exploitation of adivasi girls in the state’s Chitrakoot district or cops in Tamil Nadu’s Thoothukudi believing that torturing two people to death while they were held in police custody is acceptable practice.

Also Read: From Dacoits To Gangsters, How The Pathogen Of Crime Mutated In Uttar Pradesh

I am reminded of another episode from my days when I was the City Superintendent of Police (CSP) in Patna. In the summer of 1992, I had chased a car that had, as was widely common in those days, a black film on its windows. As I stopped the car, I did not recognise its occupants but noticed sophisticated automatic weapons with them. I knew instinctively that these could only be possessed illegally. I took the occupants of the car to the police station for interrogation. Even before I could start questioning them I received enquiries from some journalists who had learnt of the arrest through a statement given by a prominent spokesperson of a political party lauding the arrest of one of Bihar’s ‘most wanted criminals’.

Those weren’t days of the mobile phones – or even pagers – but news travelled fast when the situation demanded it to. I was inexperienced in the ways of politics then and thought the politician’s praise to be genuine. It was only a while later that I realised that the lavish applause was actually meant as a warning. Three months later we got complaints that this criminal, who was now an inmate at the prisoners’ ward in Patna Medical College (PMC), was still extorting money from businessmen. I went to the PMC to make my own enquiries and found to my dismay that the policemen on duty were preparing mutton curry for the ‘Saheb’. As I climbed the staircase of this two storied ward I was greeted by the growl of a Doberman. The dog belonged to the Saheb and was brought by the police as a special guest at the ward so that its master did not feel lonely during his incarceration! Today, this Saheb happens to be an honourable Member of Parliament.

Who knows, had Dubey not been involved in the killing of eight policemen and, as is popularly believed, not lost favour of his political masters, his career trajectory too may have mirrored the Saheb’s. Yet, I shudder to think if encounters – fake or carried out genuinely in the course of duty – can be justified purely as a means to stop criminalisation of politics; or as seems to be the prevailing theory in Dubey’s case – to prevent criminals in politics from being exposed.

Those who justify Dubey’s killing, or are indifferent to the slew of laws violated by the policemen involved with it, feel that the gangster had it coming. The justification for the act also seems to be that it swiftly eliminated a known criminal and saved precious taxpayer’s money from being spent on his care in prison. Such absurd justifications stem from the misplaced belief that the mere eradication of a criminal also puts an end to crime. Those who subscribe to this view forget that the real linkages of the criminal – his masters, financiers, accomplices – also die with him. In effect, the elimination of one criminal without putting him through due process also saves many other criminals. Take an extreme, even if misplaced or tangential parallel. If the police had killed Ajmal Kasab instead of brining him before the law, would we have had concrete proof of Pakistan’s role in the Mumbai terror attack?

The justification of Dubey’s encounter from some respected officials of the police force has been even more appalling. One retired Director General of Police felt that the killing of Dubey was necessary to restore police pride and morale. Had this pride and morale not taken a beating when Dubey killed Santosh Shukla, a minister, inside the Shivli police station and got away without the police apprehending him?

Extra-judicial killing is not only illegal; it is cowardly. In a shootout, when policemen fight honourably, there is a genuine cause for others to respect the force and for the personnel involved to feel a sense of pride. In a so-called encounter, the force only loses respect and credibility. It makes the force’s uniform appear yellow – the colour of cowardice – and not khaki.

(The author is a national spokesperson of AAP, a former Lok Sabha MP and an ex-IPS officer. Views expressed are personal.)

Extra-judicial Killing Is Not Only Illegal, It Paints Khaki Uniform In The Colour Of Cowardice