For All Practical Purposes, BJD Is Now A Part Of NDA

The growing proximity between the top bosses of the two erstwhile rivals --BJP and BJD -- has not only disillusioned the people who cast their votes in favour of the two parties; it has also left their local leaders looking rather foolish. 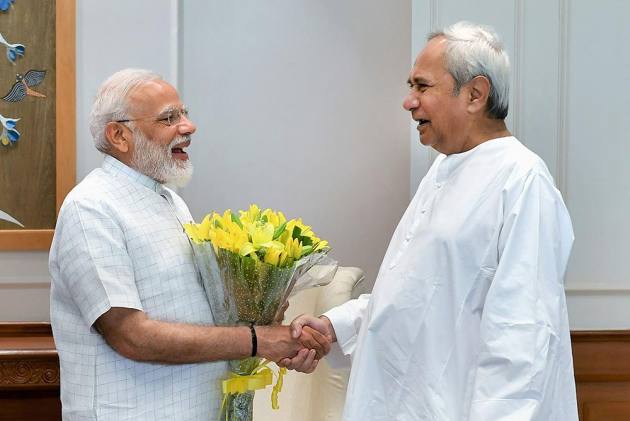 The voters of Odisha must be feeling cheated. Those who had voted for the BJD in the fond hope that it would fight for the state’s interests and act as a bulwark against the increasingly authoritarian tendencies of the Modi-led BJP must be feeling terribly uneasy at the growing bonhomie between the two parties, which fought a bitter election just three months ago. On the other end of the political divide, those who voted for the BJP in the hope that the party would take on the dominance of the BJD in the state, must be watching with consternation the party kowtow to the BJD supremo.

The BJD’s support to the RTI Amendment Bill that was passed by the Rajya Sabha last week is only the latest proof that the supposedly bitter enemies buried the hatchet soon after the simultaneous Lok Sabha and Assembly polls were over. Curiously, the BJD not only signed the petition seeking the Bill to be referred to the Select Committee of Parliament, but also spiritedly opposed it during the debate in both the Houses before doing a volte-face by voting for it. The BJD lawmakers were left red-faced and hard pressed to explain it.  But what apparently caused the about turn was a phone call by Prime Minister Narendra Modi to Chief Minister Naveen Patnaik.

In June, Patnaik had surprised everyone by announcing that his party would support BJP candidate Ashwini Vaishnaw in the Rajya Sabha election. This announcement came after another such call by Modi – and Home Minister Amit Shah. As in the case of the RTI Bill, embarrassed party spokespersons failed to come up with a convincing justification for the decision because with 112 members in the Assembly, the BJD could have easily won all three Rajya Sabha seats for which elections were held. The question being asked by those who voted for the BJD is: “Is a call by the PM a good enough reason for a party like BJD to forego a Rajya Sabha seat it was winning hands down and embarrass party MPs by the inexplicable, last minute U-turn on the RTI Amendment Bill in Parliament?”

It is no secret that in politics, such generosity never comes without a price tag. So, what exactly did the BJD gain in the bargain? Plenty, to be honest. For one thing, it is now almost certain that the chit fund cases being probed by the Central Bureau of Investigation (CBI), already meandering for years, would now go into deep freeze. For another, a promise to clear the proposal for creation of a legislative council in Odisha expeditiously. Then there is the generous grant of Rs. 3,300 crores for reconstruction and restoration work in the areas devastated by Cyclone Fani in early May. There could also be another political price extracted by the BJD supremo. Political circles in the state are abuzz with talks about the BJP’s less-than-100 per cent effort to win the one-off election for the Patkura Assembly constituency. The fact that Bijoy Mohapatra, the BJP candidate in Patkura, has few backers in the top echelons of the party certainly helped.

The bonhomie between the two estranged partners, however, is nothing new. During the five years in the first term of the Modi government, the BJD unfailingly proved to be the most consistent and loyal non-NDA ally, supporting or bailing out the government at crucial junctures even as it carried on with its pet theme of ‘central neglect’ at home. But what has changed after May 2019 is that even the pretence of opposition has been dispensed with. Deal-making between the two sides, which was a matter of speculation till the election, is now open and unabashed.

The growing proximity between the top bosses of the two erstwhile rivals has not only disillusioned the people who cast their votes in favour of the two parties; it has also left their local leaders looking rather foolish.

If the first two month after the general elections are any indication, BJD is now part of the NDA for all practical purposes. Who knows, they may even enter a formal alliance and revive their 11-year old relationship sometime in the future!

After India's Chandrayaan-2, Time To See What Other Countries Are Planning On Space Front