From Cambodian Polls To Broken Heart Syndrome, Valley Newspapers Carry Everything But Kashmir

The edit pages are published without editorials. And, if editorials appear, they do not talk about Kashmir or India or Pakistan, but about elections in Israel and Cambodia! 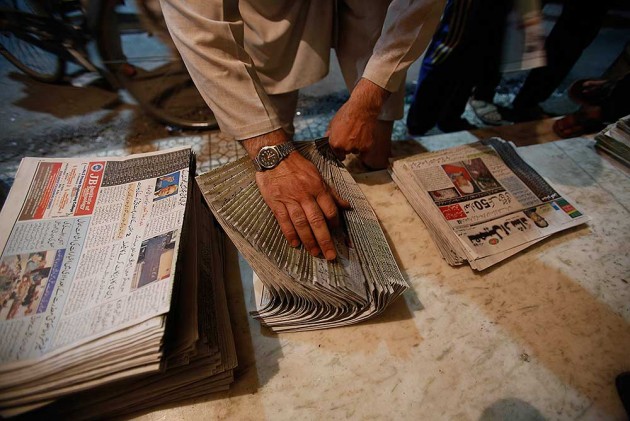 Newspapers are supposed to be credible and the only source of information during a communication blackout. And Media, as the fourth pillar of democracy, has an important role to play in shaping public opinion. It’s September 2019. Kashmir is under a communication blackout for over a month now. But in the Valley, journalists are forced to abandon their role of ‘gatekeepers’.

With no Internet or phones, Kashmiris rely on newspapers to know what’s happening in the Valley -- how the government’s decision to scrap Special Status of Jammu and Kashmir would work out in the long run; what are fears of people after the scrapping of Article 370 and hopes of officials whose phones are buzzing even during the blockade.

But newspapers that are published from Srinagar say nothing about political developments unfolding in the Union Territory, but a lot about nothingness, the very futility of life, simplicity of life, benefits of organic farming and how to remain silent when a volcano hits you. So many columns are being written about existential crises of life that a reader forgets the world is what it is. Jack Rosen, President of the American Jewish Congress, in an article on Kashmir in The Washington Post on September 2, almost predicted a war in the region. “And when the actor violates the status quo and breaks the equilibrium, the eventual goal of true, stable autonomy is destroyed. And then comes an inevitable war,” he wrote. But the newspapers published from the Valley have better things to write about.

The edit pages are published without editorials. And, if editorials appear, they do not talk about Kashmir or India or Pakistan, but about elections in Israel and Cambodia! I am convinced that many of these journalists writing editorials on Cambodian elections do not even know the name of Southeast Asian nation’s capital city.

“A second election of Israel, Naming of the Anthropocene Epotic move is caution to humanity, A result foretold: on Cambodian polls, Success is the biggest danger, God’s will in man’s life, Few methods of building trust, How to win hearts, Why anger is your enemy...” these are some of the many articles that have appeared recently in Kashmir dailies.

An edit in one of the Urdu newspapers moved me to tears. It talked about broken heart syndrome. It said when any tragedy affects your heart, it also impacts your brain. Well, it is indeed true. Reading articles and editorials these days does impact the heart and mind. I think one of the causes of Post-Traumatic Stress Disorders would be reading papers that are coming out of Kashmir these days.

There is also a mention of Pakistan. In one of the Urdu newspapers, the lead article with Mahira Khan’s picture discussed, “Why in Pakistan age of women is a big issue?”

I asked an editor of a bilingual daily, “Why don’t you write anything on Kashmir in your edit and opinion pages.”? He looked at me and smiled. “We write. I write.” I went to check his paper. The edit page talked about “how to streamline traffic.” An apt editorial to write when there is no traffic on the roads! I showed him his paper. The opinion page was missing. He smiled again and started downloading “stories” for his paper from the media Centre.

At the media Centre in Srinagar, the government has provided four computers and low-speed internet for hundreds of journalists who need to check their mails and write or send stories for publication. It is also the only facilitation from where nearly a hundred newspapers download “Cambodian election” and other stuff to publish it in their papers the next day.

We have heard, former Chief Minister Omar Abdullah has grown a beard, Shah Faesal is reading religious books, Sajad Lone is reading philosophy. This is not an impact of apparently never-ending preventive custody on them. It is a result of reading newspapers, which might have shaped their spiritual and philosophical outlook inside the jail.