Reports quoting party sources say that senior party figures and Congress CMs have asked colleagues to give the names they propose for the post of Congress president in closed envelopes. 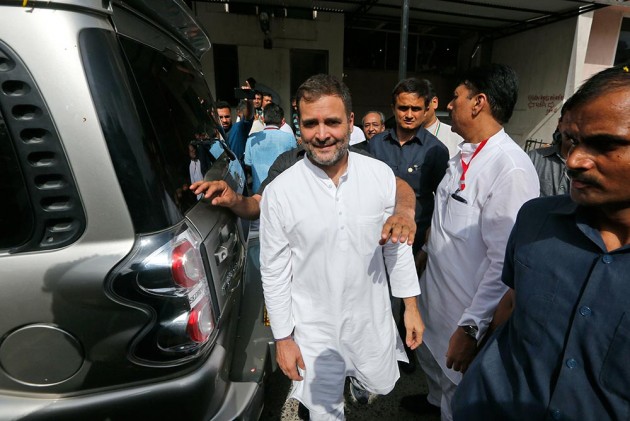 Congress president Rahul Gandhi has stepped down and the party will pick its new leader next week. This has created a leadership vacuum and what we are seeing in states like Goa and Karnataka is a result of this vacuum. Some of it will settle down after the new leader takes charge, though other problems will remain and the task before the next president of the party will be challenging for many years.

It is currently unclear how the new leader will be chosen. Reports quoting party sources say that senior party figures and Congress CMs have asked colleagues to give names in closed envelopes. The "most popular names" would be shortlisted after consulting other senior leaders and then forwarded to the Congress Working Committee.

It seems this body will then pick its president. The CWC has 24 members, including four women -- Sonia Gandhi, Priyanka Gandhi, Kumari Selja and Ambika Soni. The 20 men include former PM Manmohan Singh, Ahmed Patel, and former CMs Siddaramaiah, Oomen Chandy and Tarun Gogoi.

In one way, picking a new leader is good news for the party because it can move on from its 2019 defeat and can defend itself against the charge that it is a family-owned party. In another way, Congress also has the opportunity to redefine the way that political parties are run in India. To see what is meant, let us examine the systems in other democracies that our system is based on.

The ruling party of the United Kingdom is the Conservative Party. Its prime minister has stepped down because she was unable to deliver a way of the country exiting the European Union. The Conservative government will, however, remain and the party will choose its leader who will automatically become the next prime minister.

This is being done through a series of local votes where party members cast a ballot. Several candidates decided to contest including the ministers for home and foreign affairs, the former mayor of London and the minister for environment and rural affairs. This list of about 10 people was narrowed down to two final candidates by parliamentarians voting for the first and second preference.

The final two candidates, Boris Johnson and Jeremy Hunt, are now canvassing across the country to appeal to around 1.2 lakh Conservative Party members, who will ultimately decide the next PM of the UK.

In the United States of America, the Democrats are in the opposition. Donald Trump’s first term will end next year and the Democrats must decide who among them will contest against him. So far, 25 Democrats have put their hands up to fight. These include former vice-president Joe Biden, two women with Indian links, Tulsi Gabbard and Kamala Harris, the mayor of a small town, the mayor of New York, and some sitting senators.

They must each independently raise money to fund a team, travel and buy advertising and appeal to the party members who will vote for them in a party election. Registered Democratic Party members in each state will get a chance to have a say in who they prefer to run against president Trump.

This process will begin early next year with Democrats in the first state (Iowa) voting on February 3 and the voting in other states will continue till June. This will give the candidates the opportunity to travel the country and explain their policies and their position on various issues. The US has about 12 crore voters of whom 4.5 crore are registered Democrats and 3.2 crore are registered Republicans, the others being independents. So there is much higher participation in US elections and the choosing of candidates than there is in the UK, but we have to accept that in both nations the process is open and democratic.

India does not have as democratic a political system inside its parties as the UK and the US. One of the issues is that of the family-run parties, which are in all of our states. There is no party which does not have nepotism, but that is only one of the issues and in my opinion, it is not a major one. The larger issue is that of no internal democracy of the sort there is in the UK and American parties. It is not that there is no family connection in those nations and the Kennedys and the Clintons are evidence of that. But they operate in a system where they must be chosen by the party through a vote.

In India, tickets to Lok Sabha elections are given out without a voting process like the American primaries or the UK hustings. The same is the case for Assembly and corporation elections. There is no transparency in how tickets to Rajya Sabha members are given in any party. Certainly, there is no democratic process involved and the party leader can give it to whoever they want without explaining to the party or to the public why an individual has been favoured.
There is no meritocracy or at least there is none that is visible and transparent. Congress has two opportunities to change this. First, in the way, it goes about choosing its leader, and then how the new leader goes about reforming the party.