Priyanka Chaturvedi joining Shiv Sena is as much an indictment of what Congress is, as it is of her. She only joins a long list of political emigrants...a list that reflects an essential ambivalence about its politics of secularism (not to speak of gender). 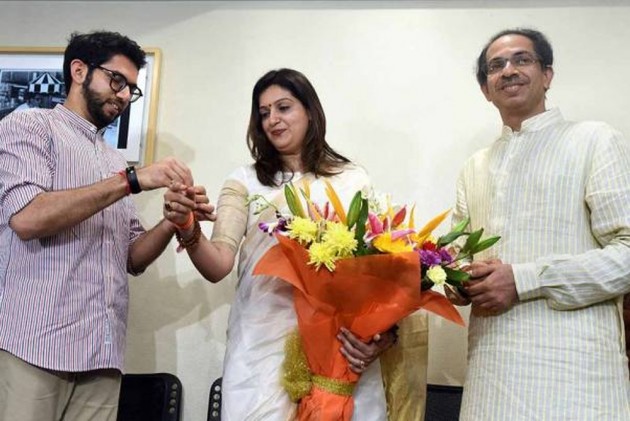 Priyanka Chaturvedi's sudden decision, bang in the middle of a general election, to quit the Congress -- and to join the Shiv Sena, of all parties -- has elicited dismay and derision in equal measure. Very valid questions could be asked of her, even if ambition and opportunism are as much part of a politician's essential toolkit as political convictions. Shiv Sena? Really?

A seemingly incoherent event. It seems an impossible task to make sense of it. How does one even try? Perhaps by going closer to the real question. Which is, as always: What is it that must be asked? And of whom?

Yes, because the other four fingers, pointed towards the questioner, also have things to ask.

The basics first. As a political face, Priyanka Chaturvedi is a lightweight. She recently made the transition from the ranks of the 'youth wing'. (As belittling a tag, in an ageist way, as that stamped on those pushed into the 'margdarshak mandal' at the other end.) No big community or constituency or loyal votebank moves with her. The effect on voting patterns, therefore, would be close to zero.

Which allows us to examine the event for its pure meaning, without being bogged down by anything else. The fact that it's not really about her, or only about her. She's just a pure symptom.

Let's take it from the top layer, the manifest one. As a reasonably composed and articulate spokesperson of the Congress, battling it out on TV in times when the going was tough for Congress spokespersons (on TV, that is), Priyanka Chaturvedi had a national visibility that more mofussil leaders will never command. And she parlayed that off into some serious social media traction too.

So how does one go from being the voice that spoke secularism in its hour of deepest crisis to being a member of its polar opposite? The Shiv Sena is known for having authored an ultra-rightwingism that often surpassed even that of the BJP. It combined violent Marathi nativism with violent pan-Hindutva. Riots, uncountable corpses, unpublished commission reports...the Sena counts all of them with an open pride that the BJP possibly covets.

How, as a person with family origins in Uttar Pradesh, do you embrace a party that revelled in hatred of 'bhaiyyas'?

Terrible choice, if seen from one shaky and perhaps naive grid, where you assume politicians have political convictions. Seen from that grid, it shows her up for what she always must have been (while voicing the opposite). As someone who at least shared many of her conceptions already with the Hindu right-wing. Or if you assume zero convictions, as someone to whom none of it mattered anyway and it's just a cold-blooded career move.

Once you grant all that, you also grant that the best young faces the Congress can produce, articulating its positions like it's a matter of brand positioning in the market, are also potentially all that.

Why young? Someone put up an election quiz on Facebook, asking: "Who among the following former Congress CMs did not join BJP?" Objective type question, with options ranging from S.M. Krishna and N.D. Tiwari at one end, to Vijay Bahuguna, Gegong Apang and Digambar Kamat at the other. We won't even bring up the Vikhe Patils and the Sudhakar Reddys. (Not to speak of Alphons Kannanthanam, who moved the entire spectrum from being a Left-backed figure, or Tom Vadakkan...another classic Congress spokesperson who has to now suitably modify his speech.)

Let's take a tangential alley. Vijay Bahuguna is an interesting instance, because of the father of course, but also his sister, Rita Bahuguna Joshi, who had a career similar to that of Priyanka Chaturvedi. One day, arch warrior of secularism. Next day, walking alongside Yogi Adityanath. And yes, of course, savarna. In both cases.

The point simply cannot be evaded. Opportunism is too light a framework to explain this adequately. There's something deeper than that. What we see here is the essential political ambivalence infecting a lot of people within the Congress. The polar expedition of Priyanka Chaturvedi, therefore, is as much an indictment of what the party is as it is of her.

Rita Bahuguna Joshi, Priyanka Chaturvedi...it's the classic type that seems unthinkable when it happens. But can those who are shocked avoid seeing the recurrent pattern? From other parties, looking at the more visible and vocal figures, look at a Jay Panda or a whole roster of JD(U) spokespersons...K.C. Tyagi, Pavan Varma et al...who need to redial their whole speech.

It's depressing, come to think of it. All of it speaks of some essential hollowness that infects the whole scenario. Do people even mean what they say when they speak in defence of a certain kind of politics? For a party like the Congress, it's an urgent question.

In one sense, thinking of it from a Congress perspective, they could say good riddance to all those who would actually act on their inner political character and move. Because it only helps a kind of clean-up in terms of political ethics. But can such an ethical cleansing ever be complete? That's the question.

Lastly, the immediate circumstances of Priyanka Chaturvedi's departure. Forget her ambitions or the fact that she could have friends in the younger Sena leadership. What was this thing about the Congress reinstating people who abused/harassed a woman? What does that even mean? Even on the logic that all hands are needed on the deck during a tough general election!

As we enter the deeps, we encounter this response from the Congress fairly regularly. Women's issues? Oh, don't trouble us with that at this point! Trust us to tackle that later. Right now, we're busy fighting fascism.

Meanwhile, one is asked to accept the party's thoroughly misogynistic and pro-reactionary stand on Sabarimala. That was not an accident or exigency, by the way. For, one is also asked to accept as a 'Congress leader' a third-grade heart of darkness like K. Sudhakaran -- contesting from Kannur, not far from Wayanad. He has put out a cringe-inducing promotional video, a kind of a film enactment, where the characters say: "What's the point of educating a woman? She can't get the job done." The final shot cuts to Sudhakaran -- you are invited to vote for him as the 'man' who can do the job. (His opponent is a woman.) Azam Khan, anyone?

Back to Priyanka Chaturvedi. At one level, it seems deeply anomalous to even try and compare genocidal communal riots (where hundreds died) and the harassment of a woman. At another, when we talk of not being sufficiently vigilant on anti-woman actions or thought, or relax our ethical norms there for more exigent reasons, we also participate in another power ideology: one that kills lakhs of girl children every year. That too is mass murder.

Without any doubt, most Indians are familiar with the stark difference between Congress and Shiv Sena, and what they stand for. That does not mean everyone is unfamiliar with the deep causative links between the two. One name will suffice to temper the shock and derision. Indira Gandhi. The grandmother of the current president. And her role vis-a-vis Bal Thackeray. Everyone who knows the history knows it.