The Odisha CM extolled the virtues of forgiveness in a rare blog on Wednesday, but it took him more than 40 days to forgive Abhijit Iyer-Mitra for what many felt were offensive tweets against Odisha. 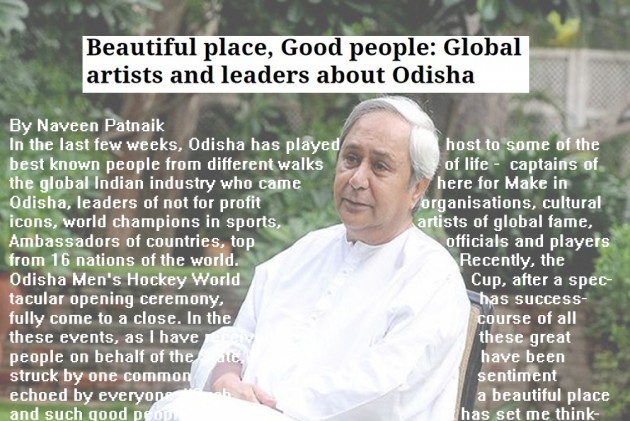 Used to the smiling visage of Naveen Patnaik staring down from the front pages every morning for several months now, readers of newspapers in Odisha, both English and Odia, had a pleasant surprise waiting for them on Wednesday. Reticent at the best of times, the Chief Minister of the state, for a change, was actually talking to them instead of just smiling from pictures – in the form of a piece titled “Beautiful Place, Good People”.

Old timers were quick to note that this was a first for the Chief Minister. Coming from a man who, in his 18+ years in the CM’s chair, has never addressed a press conference nor given a single ‘proper’ interview to any vernacular media outlet, this was bound to set political and media circles abuzz. Even the politically conscious among ordinary newspaper readers were seen engaging in animated debate at street-side tea and paan stalls over what could have led to the Chief Minister shedding his diffidence for once and talking to the people directly.

In the lone ‘press conference’ Naveen had addressed in his 18 years in power, soon after becoming Chief Minister in 2000, his stock answer to every question was; “I would certainly look into it and see what can be done.” The few ‘interviews’ that newspapers have proudly published as ‘exclusive’ in the years since then have all been well choreographed affairs where the Chief Minister’s Office (CMO) decided both the questions and their answers. Given this backdrop, it was perhaps inevitable that the signed blog written by the CM and published in most newspapers on Wednesday would set tongues wagging.

For those who believe that Naveen Patnaik is the best thing that has happened to Odisha since it became a state in 1936, it was yet another ‘proof’ that his heart beats even faster for Odisha than it does for hockey - notwithstanding his refusal to speak, read and write in Odia for two decades. Even a cursory reading of the piece would make it clear that there is a discernible attempt to hail the four qualities that have supposedly given Odisha its identity as a spiritual land where the people possess the finest attributes of mankind. The Chief Minister lists out these four qualities as “being respectful”, “humility”, “simplicity” and “forgiveness”. Had it not for the byline, most people would perhaps have mistaken it for a discourse from a man of significant spiritual attainment rather than a politician busy planning to win his fifth successive Assembly election!

But cynics, being cynics, see more than an effort to extol the glorious spiritual traditions of Odisha and the liberal, tolerant ethos of its people. They see in the piece a clear attempt to tug at the emotional chord of Odias. Significantly, the Odia translation of the write-up, obviously done by someone in the Chief Minister’s staff, puts “It has set me thinking” in the original piece written by the Chief Minister (assuming that he has indeed written it himself, that is!) as “Eha mote bhaabapraban kari deichhi” (“This has made me emotional”) in Odia! To put it in context, the sentence comes at the end of the opening paragraph, which has the Chief Minister sharing with his people what all the dignitaries who descended on Bhubaneswar over the last one month or so for the two back-to-back mega events – the Make in Odisha conclave and the Hockey World Cup - apparently told him before leaving. “In the course of all these events, as I have received these great people on behalf of the State, I have been struck by one common sentiment echoed by everyone. ‘Such a beautiful place and such good people’,” he writes.

There is an unmistakable effort to bask in the reflected glory of the two successfully organised events and to remind the people of what they had done to raise the profile of this state known so far only for its poverty and under-development and, more importantly, his own role in staging them ahead of the next elections.

Observers believe Naveen has chosen the four qualities with great care. After all, he himself has been, at least in the public eye, the embodiment of ‘being respectful’, ‘humility’ and ‘simplicity’. One big reason that the BJD supremo has been everyone’s darling is the fact that he has always been courteous in his dealings with people, has never raised his voice, never used harsh words even against his worst enemies. Master manager of public perception that he is, Naveen has adroitly hidden his expensive habits behind a veneer of simplicity manifest in his white kurta pyjama and Kolhapuris while masking his arrogance with his smiling visage.

But it is the last quality – ‘forgiveness’ – that most people, including some of his supporters, have a problem with. Eighteen years is an eternity in a profession where a week is considered a ‘long time’. But no one – just no one - who has followed political developments in the state has forgotten how low he stooped to deny Bijoy Mohapatra - one of those who facilitated his entry into the big, bad of politics - an opportunity to enter the Assembly at the very last minute in the 2000 elections (for a crime that he is yet to spell out) or what lengths he went to during the subsequent elections to deny him the luxury and to send him packing to political wilderness. Dillip Ray, the prime mover of the coronation of Naveen, is another leader who has been at the receiving end of the wrath of the man, who has suddenly decided to hail the virtues of ‘forgiveness’ now. In more recent times, the likes of Prafulla Ghadai (considered the No. 2 in Naveen’s cabinet for years), Baijayant ‘Jay’ Panda (who left the party in June this year after a bitter, year-long spat with his leader) and Dr. Damodar Rout (the Biju era veteran who was expelled from the party recently) have found out that whatever Naveen’s other virtues, ‘forgiveness’ is certainly not one of them.

What Naveen did to his political rivals or opponents can, of course, be condoned since there is no room for mercy in the cut throat world of politics. But he failed the test of ‘forgiveness’ in the recent case of Abhijit Iyer-Mitra, the Delhi based defence analyst, who was slapped with the most draconian provisions of the IPC and put behind bars for close to six weeks for nothing more ‘criminal’ than some derogatory posts on social media made in zest that made fun of Odisha, its history and its people. Repeated apologies fell on deaf ears. For the better of Mitra’s incarceration, Naveen’s image managers sought to pass it off as something done by the judiciary. And there was no dearth of people ready to buy this line of argument since no less than the Supreme Court had refused to grant him exemption from arrest. But when Naveen finally revoked all cases against Mitra, they sold it to the world as an example of his ‘forgiveness’ without any reference whatsoever to the judiciary. In Naveen’s book, ‘forgiveness’ is clearly a virtue that can be invoked at convenience.

My own reading of Wednesday’s piece by the CM is that it is the continuation of the process to make the coming elections all about himself, which began soon after the unexpected setback in the panchayat elections last year. The canny reader of the public pulse knows that he is his party’s trump card - someone who can bypass the political and administrative class and talk straight to the people and win them over with his undeniable charm and charisma – that can hide the many failures of his government as he braces for what is set to be the toughest battle of his two decade old political career. In true Indira Gandhi (or Narendra Modi, if you like) style!