One Hundred Days Of Solitude In Kashmir’s News World

'Asked about the number of people arrested or detained since August 5, the government spokesperson would say: because of the changing and dynamic situation, the numbers could not be given.' 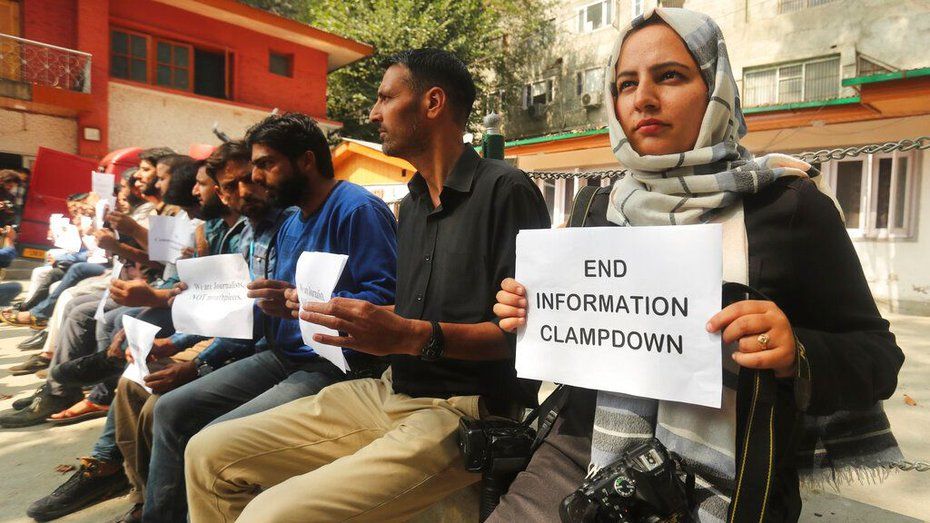 Journalists in Kashmir always carry pen drives. They cannot send their stories from their home computers because of the virtual lockdown after August 5. The internet is not functional in newspaper offices either. To dispatch the news, they are dependent on the computers provided by the government at Media Facilitation Centre.

The day the BJP government abrogated Article 370, after confining people of Kashmir to their houses by deploying thousands of troops and paramilitary forces, it also blocked mobile phones, the internet and landlines.

Ten days after the blockade, the government realised that the Delhi-based media contingent in the Valley needed some relief. So they opened the Centre at a local hotel in Srinagar, providing four desktop computers for use by around 400 journalists. Later, the number was increased to eight. One desktop was reserved for women journalists to show that the government was gender-sensitive.

Delhi-based journalists would use the Centre to download air tickets from emails sent by their offices or colleagues. The second group occupying computers were sub-editors of the local newspapers, who needed news from all over the world to fill their pages since they could hardly use local news.

Reporters and correspondents were the last to find space to email their stories.

Photojournalists were a frustrated lot as the speeds at the Centre were deliberately kept low, perhaps to instill a sense of patience among them. Many avoided using the centre, worried that it was a surveillance centre. But with a lockdown across the state, there was no alternative.

In the initial days, some reporters would browse the net in the incognito mode deleting the browsing history before exiting. But soon reporters started thinking: what if the state was privy to their writings and their emails – there’s hardly anything one could do about it. Some brought their laptops to the Centre, remove the Ethernet cable from a desktop, and use in on their own computers.

Officials of the Information Department would initially object to use of laptops at the Centre saying that the police authorities had prohibited them. But soon they gave in. A senior journalist told them that all the data stored in the computers would become vulnerable. A few days later, he too brought his laptop to the Centre. In getting your work done, you have to adapt to the humiliation meted out by the state.

It was in summer when the Centre was “dedicated” to journalists and they had to travel from different corners of Kashmir to use the facility.  Winter has now set in. One hundred days have passed and snow has accumulated on the roads of Kashmir. Yet, our practice of visiting the Centre continues.

Sometimes young reporters would try to get around the restrictions. Some of them downloaded a software called, “Connectify”. The software’s Hotspot is a virtual router that lets you share Wi-Fi. As journalists started availing of WiFi, information department employees – lording it out at the Centre -- were surprised to see reporters using WiFi on phones. For the next few days, no one was allowed to remove desktop internet wires.

Journalists were told that the Kashmir police chief had issued instructions against the use of the WiFi and laptops at the Centre. Some resisted the move. Soon the department gave up its objections, with its employees too using the WiFi facility.

From late August, a government spokesman would come to the Centre in a new suit every four days to brief the reporters about the “dynamic” and “changing” situation in Kashmir. Asked as to why three former chief ministers were in custody and under whose orders, the answer would be: because of the dynamic situation on the ground. Of course, Pakistan would come in. Certain decisions had to be taken because of the neighbour.

Asked about the number of people arrested or detained since August 5, the reply would be: Because of the changing and dynamic situation, the numbers could not be given. Everyone knew that obfuscation was the name of the game, but nothing changed in those press briefings, except the colour of suits worn by the spokesman. One was reminded of the Iraqi information minister during the first Iraqi war who kept on telling reporters that the government was winning the war, till American forces were at the doorsteps.

The J&K government spokesman would pluck numbers out and ask reporters to verify them when all phone services were blocked. Once Delhi-based journalists, mostly from TV channels, left the Valley, life moved on. The government gave up the charade of press briefings and the “dynamic” spokesman disappeared. The Centre was moved to the Information Department office.

According to department officials, several newspapers had come up after the abrogation of Article 370, receiving substantial advertisements from the government. Some had started printing in colour. For reporters, however, things remain the same, except for those who continue to lose jobs and those whose salary is being cut.

The pen drive has become essential for reporters who do not want snooping over their shoulders by others. They come from many different parts of Kashmir to the Centre, to email their stories. This takes up most of the day. Earlier, there was much shouting and arguments at the Centre. Now it is largely quiet because reporters have stopped asking for the restoration of internet services at their offices. Perhaps, everyone has reconciled to the claim that “dynamism” of the situation doesn’t allow it. Nothing seems to suggest this situation would end anytime soon.