Wing Commander Abhinandan Varthaman was captured by Pakistan Army on Wednesday after his fighter plane MiG Bison crashed in PoK. 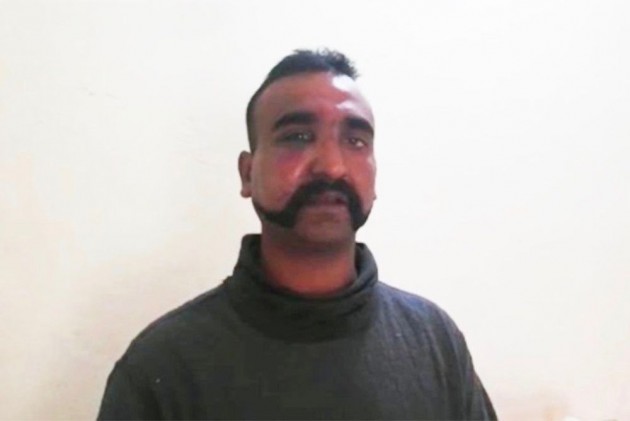 When it comes to grabbing the limelight, even if it amounts to stealing the glory of a real-life hero, very few can beat Indian politicians. Tamil Nadu politicians are past masters in this as many of them having migrated from the cinema to politics and know the power of free publicity.

So, it was no surprise that Premalatha Vijayakanth, the treasurer of the DMDK--headed by her husband and actor-turned-politician Vijayakanth-- showed up at the residence of Wing Commander Abhinandan Varthaman’s father at a Chennai suburb on Thursday morning.

Ostensibly, it was to express support of her party and her family to the captured air force fighter pilot’s parents and wife in these trying times. But in reality, it was to gain media publicity thanks to the dozens of TV cameras waiting for some news from the residence of Abhinandan’s father Air Marhsal Varthaman, a retired fighter pilot himself.

Premalatha was accompanied by her beefy second son Shanmuga Rajeswaran, wearing an army fatigue T-shirt to suit the occasion. He should know how to don the right costume, as his father is known as “Captain” (in cinema and politics) for having played a retired Army captain turned forest officer who captures a forest brigand in the film “Captain Prabhakaran.” The Captain’s son himself has played hero in a forgettable film titled “Sagaptham” (Historic Chapter).

While the entire nation was in awe of Abhinandan’s cool confidence as he replied to the questions of his captors, here was Premalatha trying to score a few publicity points by recalling how she had assured the pilot’s family that the entire nation was praying for his safe return. After speaking a few sentences for the TV cameras Premalatha walked away: mission accomplished.

The DMDK leader could have actually opened the floodgates, as other political leaders would now show up at the Air Marshal’s house, unmindful of the family’s expressed desire for privacy during their anxious wait. But our politicians would nevertheless come visiting to register their presence and put on television record their concern for the Wing Commander’s well being. On Wednesday night the local MP and MLA had unsuccessfully tried to meet the family.

The TV channels, especially the dozens of local ones, actually feed the hunger of such publicity mongers by waiting for them and thrusting their microphones in front of these leaders. If the TV cameras were not around, most of these leaders would go missing.

“Do not underestimate our political leaders. If there are no TV cameras they would still make self videos of their visit and distribute them to the news channels,” quipped a veteran journalist.