The Unmourned Of Kashmir

Mourning comes after we feel the tangibility of the loss. Its absence, or the inability to come face-to-face with the dead, only deepens the void in the heart. What we are left with is an abyss that sucks us into disbelief and shock and uncertainty, writes Qadri Inzamam. 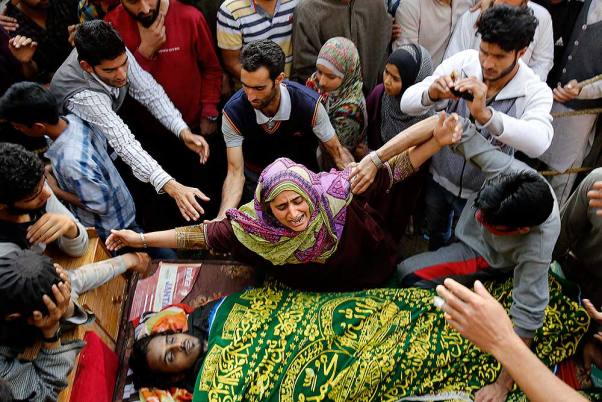 In July 2017, when the news broke out that one of the top Hizbul Mujahideen militant commanders, Sabzar Ahamd, is trapped in a house — subsequently leading to his death — his mother, Jana Begum, waited impatiently at her home in a South Kashmir village; her eyes fixed on the gate.

When Sabzar’s body arrived, Jana resiliently instructed the pall-bearers to take his body to her room where she had already made bed for him. Jana locked the door from inside and reclined besides the bullet-riddled body of her son, his head pillowed on her arm. For the next eleven hours, Jana sang lullabies, songs and dirges to him. For over two years, the mother and the son had not sat or eaten together.

Before Sabzar was laid to rest, Jana esnured she had told her son everything she wanted to, lavish on his body all the maternal love she could — the only possible source of consolation she will have to live with for the rest of her life.

'Life Has No Meaning In Kashmir,' Says Man Who Collected Pieces Of Nephew's Brain Killed In Shelling

In Paranoid World Of J&K Security Forces, One Person Can Be Four

A Day In Paradise: 'No One Needs A Bullet To Kill... A Stone Can Do It' - Fear Factor Grips Kashmir Valley

Sabzar was a militant for millions of Kashmiris, a son for her mother, a dreaded “terrorist” for the Indian forces, a "big Breaking news" for the media. These political and ideological lines divided the grief and joy. But away from all those interpretations of his death, I kept wondering about Jana, someone whose only concern was how her son lived and died and how she will have to live with the experience and memory for years to come.

To mourn over her son’s death was the only assuagement she could have. In those 11 hours, she did all she could. It seemed to me we mourn someone not to express remorse but to find a way to accept the loss. We mourn not to let go off all the sadness but to fill the void that is left behind the loss. The tangibility of the loss must be felt to have a sense of loss. We do not recover from the losses, we do not forget, but it is an extreme of morbidity — essential for drawing comfort from the thought of having embraced a beloved dead, feeling the stiff, blanched, languid cold body collapsing in itself. These are the souvenirs Jana, too, will hold close to her.

But what happens when this very right to grieve a dead beloved is snatched?

Earlier, the security forces would handover the bodies of local militants or the civilians killed during a shoot out to their families for burial. The funerals would often be attended by thousands of people. These large gatherings, glorifying the slain, would always irk the security forces. Protests against the security forces were also not uncommon when people gathered in large numbers during funerals. This Standard Operation Procedure (SOP) saw a shift recently after a large gathering, despite the ongoing lockdown due to Covid-19, was witnessed at the funeral of a militant killed in North Kashmir's Sopore. The authorities now refuse to hand over the bodies of the local militants or civilians to their families, citing the apprehension of lockdown violation as a reason. The local militants killed in encounters are either buried in Baramulla or Sonmarg.

On May 4, in Kashmir’s northern district Kupwara, unidentified militants fired upon a patrolling party of paramilitary forces, killing three of them. Half a kilometre away from the shootout site was the physically infirm Hazim Shafi Bhat, a 14-year-old, tending to his apple orchard with other boys. When they heard the gunshots, all of them fled to save their lives except Hazim, who could not run as fast as others. Few hours later, Hazim was found lying dead on the road.

At first, the official version maintained that the forces had managed to kill a “terrorist” near the shootout site. But by evening, it became clear that the slain was Hazim, a class seven student.

At home, Hazim’s mother, in utter disbelief, waited for his body. But the police, fearing a large gathering at the funeral, did not hand over Hazim’s body to his family for the last rites. Instead, Hazim was taken by the government officials to a graveyard, reserved for militants, 30 kilometres away from his home, in Baramulla, and buried there the next morning. The authorities asked his parents to travel to the graveyard to see their son for the last time and see him being lowered to a grave. This was the extent to which they were allowed to mourn, for beyond it, “it could amount to violation of law and order”. Besides Hazim’s parents, a handful of other close relatives were allowed to attend the funeral.

When I try to imagine Hazim’s funeral, I do not imagine him being lowered to the grave; my mind strays and pictures his mother who was deprived of mourning. Her inability to cry at ease, her lost chance of singing an elegy to her son with some privacy, her chance to ruffle the matted hair on his head or perhaps dye his hands with henna — all macabre idiosyncrasies Kashmir has mournfully evolved with over all the years of turmoil: women sing wedding songs — reserved for grooms — to the boys who fall to bullets, shower them with candies and flowers when their bodies are brought home on hospital stretchers.

Whether it is the mourning masked in morbid celebration or the incoherence of a grieving heart that manifests itself at these funerals, yet it is something one may never decipher. But it does console the family members. They live with the little satisfaction of bidding a proper, certain farewell to their loved ones. But what was Hazim’s mother left with? A thousand wishes she knows she can never fulfill, the unsung dirges and that uncontrollable urge to hug her son for the last time.

We lose our loved ones to death — or maybe to something more dreadful: indifference. The time-worn platitude that time eases pain and heals wounds holds not even a shred of truth in it. Because, what if the time itself is pain.

It is the mourning, the period we live in grief and those wails we let out that help us absorb the loss. That is one of the reasons we mourn the dead. But mourning comes after we feel the tangibility of the loss. Its absence, or the inability to come face-to-face with the dead, only deepens the void in the heart. What we are left with is an abyss that sucks us into disbelief and shock and uncertainty. For Hazim’s mother, it might take longer than usual to come out of the mourning. The conventional 40-day period will be too short a time to mourn someone who was not allowed a proper farewell.

Kashmir stands ever more torn in an endless war. The meaning of life in such a place could be anything or nothing. But we certainly do not live in Camus’ world of absurdity. Because we remember when our darlings die, we earnestly mourn them and then we write them poems and songs in remembrance. Then, somewhere, every night, Jana sings those songs to put herself to sleep.