The Congress is also a schizoid being (like the Left) in many ways. If it’s displaying courage on AFSPA/sedition et al, it’s also reacting with intellectual panic on another front. 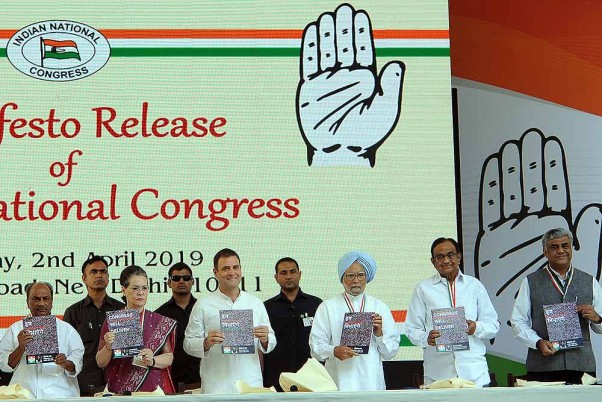 Rahul Gandhi’s choice of Wayanad is a fait accompli now. The instinctual judgement that it was a wrong call -- forfeiting much more, in return for speculative gains that could have been had anywhere else in the south, minus the complications -- has only strengthened over the days. A lot has transpired in between. Directly flowing from it, an extremisation of differences between the Congress and the Left -- a lot of lusty name-calling from either side. Rahul Gandhi should have known that venturing into Kerala would mean there will be blood, and blood loss, and it’s not a particularly smart idea to waste that precious commodity at a time when both sides are fighting back from an anaemic state. That too, against an entity that poses a danger not just to them individually but to a whole ecosystem they co-created, and against whom they share much of their fundamental differences. The BJP needs to do little else but sit back, open a pack of banana chips, and watch the fun.

Yes, politically speaking, a sharper and less triangulated fight would have made sense. But the problem is deeper than bad optics, or loss/gain of votes. The real injury is at the ideational level. Look only at the Congress manifesto. A document bristling with big ideas, it’s high on a kind of creative welfare, thinking of it as a tool to revivify the economy bottom-up. The real surprise is the proposed reforms in AFSPA and scrapping of the sedition law. A brave call to take in these times, way overdue, and hopefully, a positive conversation-starter that should lead to a genuine rethink all around. How does all this relate to the Congress-Left animus? It's such an obvious point that it's a wonder it needs to be stated at all. The interface between the two has been a troubled but very productive one in Indian politics. A whole raft of flagship Congress policies -- from Indira’s bank nationalisation in 1969 to NREGA in the noughties -- owes to that space of interaction. The present Congress manifesto, accumulated with a great deal of participative effort, is in every way an heir to the mode of thinking creatively about policy that they co-authored. And before anyone arches an eyebrow about “Left economics”, remember the tens of thousands of crores the NDA currently expends on NREGA, and the fact that, in 2014, even the World Bank called it “a stellar example of rural development”.

What was the best time for the Congress in recent years? Wonder of wonders, the same as the best time for the Left! They were together, remember? And as indices now show, it was the best time for growth as well -- proof that deepening welfare is not incompatible with growth, it deepens growth. It was UPA-I that initiated some of the most urgent policy correctives to address the gaps left by liberalisation. And it was the suicidal and dubious purism of Prakash Karat that brought that to an end, and left the field fallow for their common foe, the BJP, to sow its whirlwind. Rahul Gandhi’s little excursion to Wayanad only furthers that politics of attrition, which brought the two parties to their current atrophy, that too at a time when a careful consensus-making is needed. The space of discourse is anyway polarised in a way never seen before. Even an Atal Behari Vajpayee’s words and thoughts on Kashmir would invite some severe trolling on Twitter from today's bhakts, a poet like Kabir might have been in jail under some draconian law. How do you navigate this minefield with reformist ideas on AFSPA and sedition? It has to be a tango, a call and response song, a conversation and not a soliloquy. Certainly not two parallel orchestras.

The Congress is also a schizoid being (like the Left) in many ways. If it’s displaying courage on AFSPA/sedition et al, it’s also reacting with intellectual panic on another front. A few days ago, when Wayanad was still iffy, I’d framed a serious question in a jokey way: "If Rahul Gandhi has to climb the Ghats, why not go the whole hog and trek up to Pathanamthitta, where he can explain his party's wonderfully flexible and democratic stand on Sabarimala?" (See: Double Negative: Why Rahul Gandhi Could Have Avoided Those Hairpin Bends Of Wayanad)

Of course, he has spared himself (and countless TV anchors) the onerous task of having to pronounce 'Pathanamthitta'. And perhaps, in Wayanad, he won’t have to travel far from work for a holiday. Jocular thoughts aside, what is the politics Rahul will uphold and speak on behalf of? The timid reactionary politics everyone saw during the Sabarimala controversy? Imagine a party president who will not even have space to voice his own thoughts on the ground! Will he then ventriloquise the state unit’s opportunistic reactionaryism? As he zooms off into that ideological void, he must ponder the thought that, in the future, doors could open on the Left -- so please do mind the gap.

Diplomacy in times of war may be the art of pursuing a pre-ordained failure, but combatants would do well to remember that there will come a time for post-war reparations. Right now, everything that should not be happening is happening in the space of conversations. Yes, there’s plenty scope for name-calling, on legitimate grounds, on either side. And there’s plenty scope for acting/thinking/working together. Which one would they rather have?

Both sides have very dark zones in the past too, acute failings of the mind and moral fibre. Both sides need to open themselves up to genuine criticisms -- on questions relating to their often dubious record on what Mukul Kesavan memorably called ‘opportunistic communalism’, on the Dalit allegation (a totally valid one) that their ‘left-liberalism’ is essentially a savarna confection, indeed, even the Right’s critique of their past cronyism and control-freakishness in the institutional space. Only listening to another can help you see yourself the way you are sometimes. This is why mutuality is precious.

It’s a folly to imagine there’s no alliance because no one signed on the paper at the formal party level. There’s a grand alliance of common people on the ground and on social media, newly politicised, talking, thinking, sharing, arguing -- a whole community of conversations. The parties must honour that. Remember the debate about working from home? How a retreat from a synergistic space is uncreative? Both sides can retreat to their ideological homes, sit in the balcony and shoot the breeze grandly with no one pointing out the errors. Or they can report to office together, have Munnar tea together on the terrace, challenge themselves in a competitive space…and yes, pass around the banana chips.