When Asked To Bend, We Turned To Kafka, George Orwell 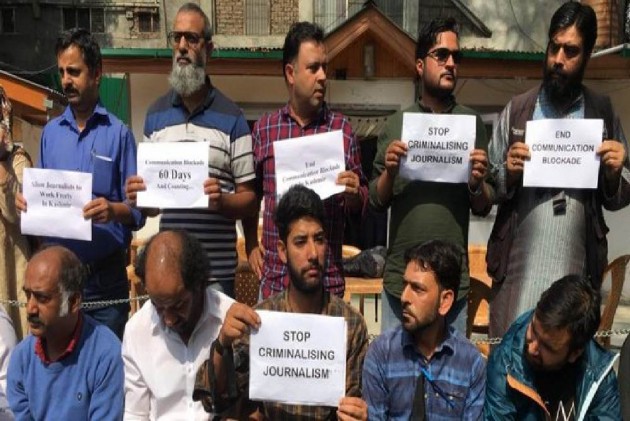 On August 15, ten days after the abrogation of provisions of Article 370 which granted special status to Jammu and Kashmir, newspapers in the Valley resumed publication. Lead articles in the local papers in August 2009 were about health-related issues. Now, the newspapers have turned to literature. Since so much is happening in the Valley, the papers have decided to make readers bury themselves in literature to avoid negative effects of the prevailing environment. And it's because of this reason that we see lead articles with bylines of Kafka and George Orwell. At times, the publications even revisit the "Brave New World of Aldous Huxley". Occasionally, they prod readers to think beyond Dr Ali Shariati.

To begin with, we are told that Kafka’s "The Trial" appears to be a simple story. “Someone must have been telling lies about Joseph K., for without doing anything wrong he was arrested one fine morning.” Then, subsequently, newspaper columns tell us that everything K. learns about the Court and the legal system he had to deal with indicates that the law is an a**. Perfect. We all know it. Indeed, law is an a**. A cancer patient is in jail under preventive detention law, Public Safety Act and the Court seeks a report from the government in this case. To be on the safer side, we can say, we are talking about Kafka, who made his character Joseph K. to understand that law is an a**. We are not talking about that law which seeks a report from the government over the arrest of a cancer patient. Such and such is the situation.

Newspapers here also reproduce excerpts of the "Metamorphosis". In times when newspapers don’t publish articles and editorials on the current political, economic and security situation, reproducing "Metamorphosis and "The Trial" appears to be a fitting tribute to the times we all live in.

After reading what happened to Joseph K, who was killed by the side of the road, anonymously, and, meaninglessly, I looked for the next day’s newspaper column and hoped it wouldn’t be as Kafkaesque. The very next day, newspapers had carried excerpts from George Orwell’s book, "Such, Such Were The Joys". The essay was about bed wetting, and thrashing and beating it invoked in the old days. “This was the only time throughout the boyhood when a beating actually reduced me to tears, and curiously enough I was not even now crying because of the pain. The second beating had not hurt very much either. Fright and shame seemed to have anaesthetized me,” Orwell writes.

Away from bed wetting scene of Orwell, in the Valley, apple farmers are unable to sell their produce. Shops in the Valley remain shut and public transport is off the roads. And no one is talking. Half of the mainstream political leaders are in preventive detention and the other half is waiting for the release to say something. Nobody is saying anything. Everyone is silent. After 71 days the government removed the ban on postpaid mobiles and the day after it revoked the ban on the post-paid phone calls, it re-imposed the ban on the SMS services. Newspapers describe the situation on the front pages as “Uneasy Calm prevails.” In the inner pages, we see them "bed-wetting" with Orwell.

The next day, the one after the bed-wetting day, I found an Essay on Edward Said. It read: “Where Edward Said was wrong.” My colleague was exasperated by this daily bombardment of literature that newspapers here reproduce in Edit and opinion pages. “Why don’t they come up with regular essays on Chemistry, Physics and Biology? At least it will help students during the exams as schools are shut for the past 70 days,” he said and we all laughed. Even in the worst of circumstances, this dark sense of humour over every tragedy helps people here not to get killed by the side of the road, like Joseph K, anonymously, and, meaninglessly.