Why Passengers Throw Stones At Glitzy Trains Like Train 18

The Railways' fastest train - Train 18, which is scheduled to be flagged off by Prime Minister Narendra Modi on December 29, was pelted with stones on Thursday during a trial run between Delhi and Agra. 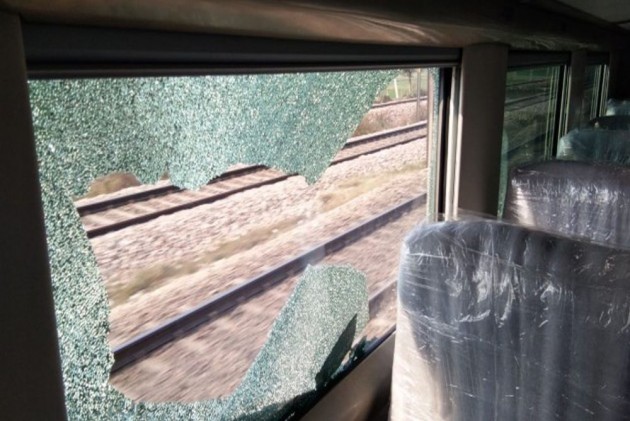 The images are heart-wrenching: Shattered window panes of a spankingly new and indigenously developed T-18 train on its trial run from Delhi to Agra. The “Tejas” – last year’s offering that had promised to transform rail travel experience – had met a similar fate from stone-pelters on its inaugural run from Mumbai to Goa. According to reports, coaches of the Varanasi-New Delhi Mahanama Express -launched January 2016, now display a sad sight of torn seat covers and paan (betel leaf) stained floors. In Gujarat and Maharashtra, sections of farmers remain adamant on not sparing land for the construction of the fancy Mumbai-Ahmedabad bullet train project.

The rail officialdom has responded to such matters with self-righteous indignation: “Passengers are not only disrespectful of the hard work put in by the rail engineers, but are also uncivilised, uncouth and anti-development”.

While the trend of despoilment of premium products of the Indian Railways has been persisting, the rail bureaucracy has been unable to bring itself around to introspect on this question: What, after all, explains such behaviour? Is there something amiss about the trajectory of India’s rail development?

Such sights are a routine at Platform No.16 at the New Delhi Railway Station: A gaggle of passengers, including infant-carrying women and small children, shepherded by baton carrying personnel of the Government Railway Police (GRP) in what appears as a never-ending queue before the arrival of the Bihar-bound Sampoorna Kranti Express. When the train pulls in, all hell breaks loose with these passengers struggling to enter into the unreserved compartments.

Struggles of the unreserved passengers are many: They need to fight extortion and bribery along the way and keep a watch on their belongings. According to rail crime statistics, maximum drugging and cheating cases occur in the unreserved class.

The point is this: Unreserved passengers bring maximum passenger revenues for the state-owned transporter, but facilities of rail travel have remained abysmal for them. Against the norm of fitting each passenger train with four General Sleeper (GS) coaches – Unreserved Coaches – majority of trains have no more than two such coaches. The rail bureaucracy has also remained negligent in curbing the activities of touts, gangsters and the corrupt lower bureaucracy.

Admits a senior official: “Circumstances of rail travel are horrendous for the unreserved passengers. This category of citizens cannot be expected to swell with pride at the launch of a T-18. They will only throw stones at such trains”.

Writers have often held people in a thrall by stories of “rail ghosts”. In a book titled “The Calcutta Chromosome”, Amitav Ghosh recounts unusual and chilling ghost stories linked with train journeys. The late Sunil Gangopadhyaya has authored a story on a smoke-puffing steam engine that pulled in from nowhere in the dead of the night in a remote hamlet in West Bengal.

For some reason, majority of the rail ghost stories have been centred around West Bengal. Before it was finally reopened in 2008, the Begumkador railway station in Purulia district had remained closed for 42 years, as rail officials were unwilling to work at the “haunted station”. The popular myth at Panchantala near Behrampur has been that a driver-less Pakistani locomotives (then East Pakistan) steamed into the station at the dead of the night in 1965 and continue to be intermittently sighted. There are stories of a child ghost climbing up the pillars of the Roopnarayan bridge on the Howrah-Kharakpur section. Locals believe that the child had been sacrificed at the time of the construction of the bridge. There is a station called “Nangi” (naked woman in Hindi), where stories of a lady ghost abound. The Rabindra Sarobar station in Kolkata has also been on the haunted list.

If plans get finalised, Mumbai’s iconic Chhatrapati Shivaji Maharaj Terminus (CSMT) will get a makeover on the lines of New York City’s Times Square to make it safer for road users.

The biggest problem which Mumbai faces is unauthorised parking on roads. The Ninth Avenue in New York has adopted a fantastic concept, where a lane reserved for bicycles is protected by parked vehicles in the adjacent lane, Mumbai Municipal Additional Commissioner Vijay Singhal has been quoted as saying.

According to news reports, road use rights will be modified with clearly delineated traffic lanes, with walking and resting zones. This move is part of a joint initiative by the Brihanmumbai Municipal Corporation (BMC), the traffic police and the US-based Bloomberg Initiative for Global Road Safety.