No Delhi police chief in recent years has, until Amulya Patnaik came along, had a tenure that's moved so frequently from one disaster to another. 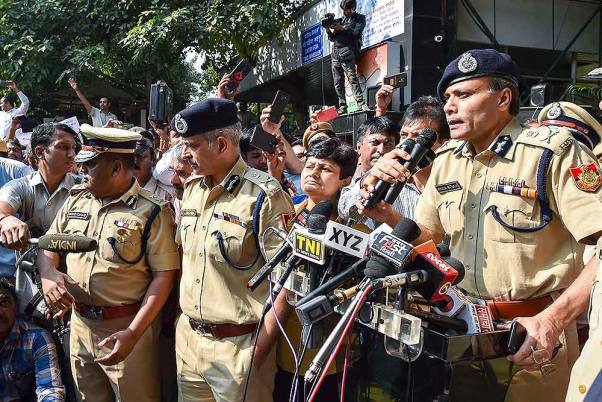 In January 2017, when 1985-batch IPS officer Amulya Patnaik was chosen by the Centre for the role of Delhi police commissioner, he superseded two senior officers - Deepak Mishra and Dharmendra Kumar (both from the 1984 batch). The grapevine then held that Patnaik was chosen over Mishra and Kumar on grounds of merit - that he was better suited for the job because of his 'distinguished service record', clean image and ability to perform under the immense pressures that the national capital's police chief is accustomed to.

Three years later and weeks ahead of his scheduled retirement on January 31, the grapevine is abuzz with a different question - why, despite a tenure marred by controversies and failures, is Patnaik still the Commissioner of Delhi Police?

There is no denying that the job of the Delhi police commissioner is, at the best of times, a daunting one. The national capital is tainted by the infamy of doubling up as India's crime capital, especially when it comes to crimes against women. Delhi's complex power arithmetic gives the elected state government no control over the Delhi police which is answerable to the Union government. The VIP culture so endemic to the country's seat of power brings its own share of problems for a police force and its chief who can be hauled up for doing their job well because this may have inconvenienced the high and mighty. However, despite these challenges, no Delhi police chief in recent years has, until Patnaik came along, had a tenure that's moved so frequently from one disaster to another.

The violent attack on students and faculty members of the Jawaharlal Nehru University (JNU) by armed thugs for hours on January 5 and the blind eye that the police present on the campus turned to the horrific episode is the latest instance of Patnaik's utter failure in leading his force. 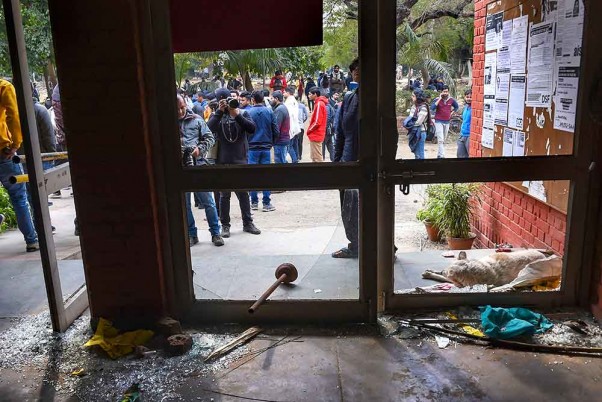 Shattered glass of doors are seen at the Sabarmati Hostel following the Sunday's violence at the Jawaharlal Nehru University (JNU), in New Delhi. (PTI Photo)

The JNU ambush came weeks after students at Delhi's Jamia Milia Islamia University were thrashed by cops who barged into the varsity campus in the pretext of breaking up peaceful protests against the Centre's Citizenship Amendment Act (CAA) misadventure. While at the JNU on January 5, the cops played mute spectators as the goons wreaked havoc, at Jamia Milia, there have been reports, backed by photographs and videos, of the crackdown being a nearly joint operation between the police and Hindutva elements.

In both these incidents, Patnaik's inaction - or should it be called tacit approval - has been glaring. It is no wonder then that former Union home minister P. Chidambaram questioned Patnaik's silence on last evening's violence in JNU and questioned why, despite television news channels and social media relaying live images of the chaos in JNU, Patnaik did not even feel the need to visit the spot and lead his force into restoring normalcy.

But then, if whispers in the Delhi police ranks are anything to go by, Patnaik's seeming conspiracy of silence isn't unusual.

"Never has the Delhi police had a commissioner against whom thousands of police personnel have protested. Last year after the violent clashes between lawyers and cops at the Tis Hazari courts, nearly the entire police force of Delhi, barring the seniormost officers, were up in arms against Patnaik's lack of leadership. He didn't even bother to speak up for his own men, how do you expect him to speak up for students who have irked the ruling party," said a senior Delhi police official, requesting anonymity.

Sources say dissatisfaction among the police force against Patnaik's leadership had begun nearly two years ago because of his "unwillingness to engage with his officers". A DCP-rank officer told Outlook that Patnaik would "rarely listen to personnel who went to him with any grievance" and that the protests against him in November following the Tis Hazari incident was "actually a culmination of the unrest seething within the force against him for nearly a year".

When the cops protested against Patnaik's failure to rein in the lawyers who bashed up police personnel at the Tis Hazari courts, Puducherry Governor Kiran Bedi, who had a long association with the Delhi police from her days in the IPS, had said, "leadership is a character that takes responsibility and tough decisions...". Patnaik's tenure, particularly over the past three months, has been devoid of any semblance of leadership, responsibility or tough decisions.

Patnaik's silence on the Tis Hazari incident could be brushed aside as an internal matter of the force because the complaining party then was the police itself. What, however, justifies his inaction following the anarchy let loose in JNU or the police's excesses in Jamia? The only plausible explanation can be that the 1985-batch IPS officer has surrendered before a political leadership whose antagonism towards the students at Jamia and JNU has been laid bare over the past five years. 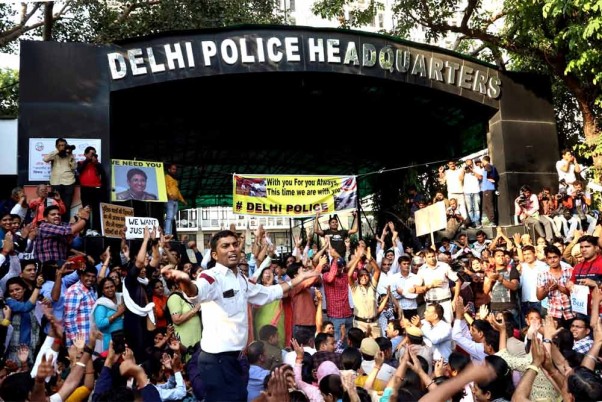 Police personnel gather outside the Delhi Police Headquarters at ITO to protest repeated incidents of violence against them by lawyers, in New Delhi. (Suresh K Pandey/Outlook)

Sources say there were "at least three occasions over the past year when it was believed that Patnaik will be transferred out of the Delhi police" but the commissioner survived the axe because he has the blessings of an influential senior officer who enjoys a cabinet rank.

After the NCRB 2017 report revealed a spike in Delhi's crime rate and further deepened the taint of the national capital being unsafe for women, there were rumours that Patnaik will be replaced. "Several names were doing the rounds as his possible successors, including those of Sachidanand Srivastava, Ajay Kashyap and Taj Hasan... One of the front-runners had even started accepting congratulations from some colleagues but then nothing happened," a senior Delhi police officer told Outlook.

The rumours of a replacement began again after the Tis Hazari episode, say sources, with names of 1986 batch officers Rajesh Malik and S. Nityanand (both special commissioners in Delhi police) doing the rounds. However, these rumours died down too.

After the police crackdown in Jamia and a raging controversy over mysterious viral videos that allegedly showed a lathi-wielding civilian as part of the police team attacking students and another of cop pouring some liquid on a bus that was later gutted, Patnaik had once again come in for heavy criticism. This time round though, there were no rumours of him being sacked. Instead, Prime Minister Narendra Modi applauded the Delhi police during a public meeting at Ramlila Maidan.

There is now speculation that Patnaik may get an extension of service after his retirement on January 31. The reason- Delhi goes to polls on February 8 and changing a new police chief right now may take a while to "settle down" in the challenging role.