Legion Of Honour For Dylan 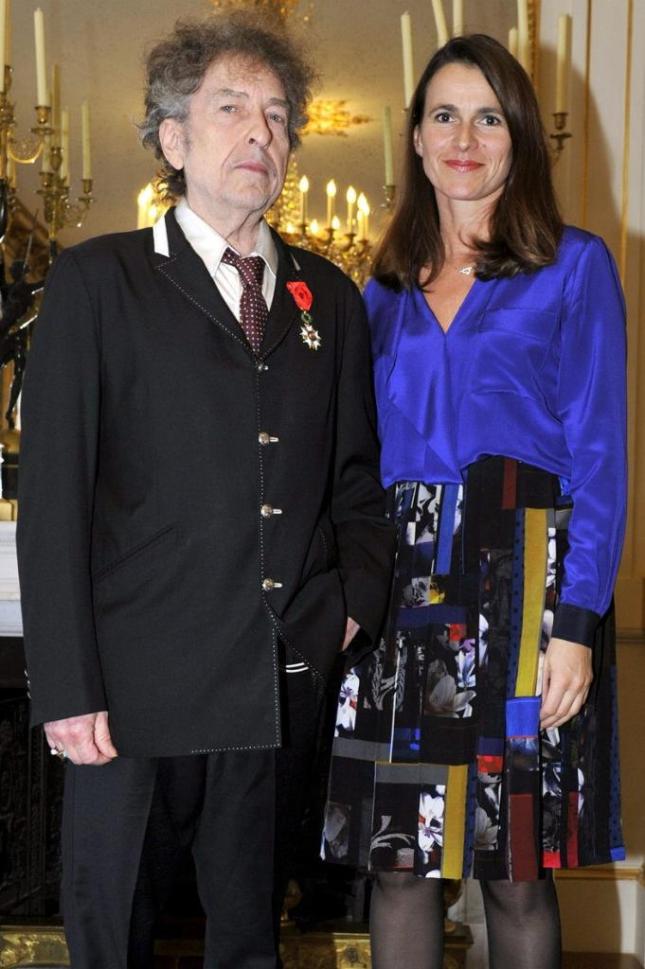 American musician Bob Dylan was awarded France's highest cultural award, the legion d'honneur or the "Legion of Honour" in a brief ceremony in the French ministry of Culture on November 13, 2013, which he had asked to be kept secret, with no media or cameras allowed.

The private ceremony was therefore confined only to 30 or so guests, 20 of whom were apparently Dylan fans chosen at random.

His proposed investiture had been attacked by General Jean-Louis Georgelin, the Grand Chancellor of the Legion, who said Dylan was “unworthy” because of his anti-war songs and smoking cannabis.

The decision was reconsidered when the head of the committee lauding Dylan as a "tremendous singer and great poet" in a letter to the French newspaper Le Monde.

Presenting him with the award, the French Minister of Culture and Communication, Aurélie Filippetti said he was a hero for young people hungry for justice and independence. His aesthetic, she said, spoke to the heart; his voice a cry of liberty.

She went through the gamut of his songs—from The Times They Are A-Changin' in the 1960s to Time Out Of Mind in the 1990s—over the last six decades, linking them to eras and causes such as the US civil rights movement. She also made an allusion to Dylan's influence on the famous Paris student uprising of May 1968

Addressing him, she said had he himself had been inspired by poets including the French symbolists Verlaine et Rimbaud. She said that while he never sang in French, cover versions, particularly those sung by Hugues Aufray, who was in the audience, were legion in France.

Dylan, 72, who has famously never liked being used as a spokesman for other people's causes, was reported to be distinctly growing increasingly uncomfortable during the French minister's gushing speech as she waxed lyrical about him.

After her speech, all Dylan said, characteristically, was a brief “I am grateful and proud.”

He then posed for the photo above with Aurélie Filippetti, and left.

Dylan, who last year received the US Presidential Medal of Freedom, the top civilian honour in the U.S, was voted into the American Academy of Arts and Letters earlier in the year, marking the first time a rock musician had been chosen for the elite honour society.

Officials in the Academy—which recognizes music, literature and visual art—were unable to decide which category Dylan belonged to—for his words or his music—so instead of choosing one category where he could fit among the elite group of 250 regular members, they voted him in as an honorary member—an even shorter list that includes Meryl Streep, Woody Allen and Martin Scorsese.