Meet The Mini-Helicopter: Weighs 10Kg, And Can Stay Airborne For An Hour

The 10 Kg helicopter, runs on a 2-stroke petrol engine and can carry a payload of 2.5 kg. Nearly 18 years ago, around the time aerospace scientists in India were beginning to look at Unmanned Flying Vehicles (UAVs), Prof C Venkatesan found himself tackling a difficult problem -- how to build a small unmanned helicopter. On Friday, when aircraft maker Hindustan Aeronautics Ltd (HAL) announced that it had successfully demonstrated a 10Kg helicopter built by IIT-Kanpur, the 67-year old academic sat back with Outlook to recount that interesting story.

For the record, his mini helicopter is functionally almost identical to a full size-helicopter. Of course, it's autonomous, running on various kinds of sensors. A mini helicopter can be useful in many situations -- in Japan, for instance, mini helicopters have long been used for crop dusting, that is, spraying fertilisers or pesticides on trees and crops.

Venkatesan, who till recently taught aerospace engineering at IIT Kanpur, recalls that it all started when he met Lt.Gen.(Retd) V J Sundaram -- in the UAV community in the country, Sundaram is a mentor; an early campaigner for these autonomous technologies. "He threw the question at me. Can you build a small helicopter? That's when I started digging up information," Venkatesan tells Outlook. The project obviously had to be broken down into small pieces and he gave these tasks out as BTech projects to undergraduate students. "Every year I gave my students a project...rotor blade, rotor engine, controls," he says. Some of the bigger projects won prizes. "We would have summer interns working on small tasks," he recollects. "Even if they did a wireless data transfer from a sensor, that was great. Text books can't teach you everything."

It took five years before he could get a complete picture of the task ahead. Then he approached the Department of Science and Technology for a grant.

To understand some of the complexities involved, Venkatesan offers some perspective. A helicopter's rotor blade is flexible -- it moves forward and backward within its plane, called lead and lag; it bends out of plane (the flap) and it also twists. "All these motions happen simultaneously in a rotor blade," he says. Even though helicopters have been flying since the 1940s, the development of equations to understand the dynamics started only in the 1970s. "Even now it's a complex problem," he says. The project, which got the go-ahead sometime in 2005, was periodically reviewed by experts drawn from the Defence Research Development Organisation (DRDO), Indian Space Research Organisation (ISRO) and academic institutions, according to a note on the DST website. HAL, which makes helicopters, collaborated with IIT-Kanpur for the project.

"Today, we have reached a stage where we have a good grip on the know-how. So, we can take up new challenges, like increasing the communication range," he says.

HAL said it recently conducted a successful ten-minute flight demonstration of the mini helicopter with the onboard camera streaming live video. The 10 Kg helicopter, runs on a 2-stroke petrol engine and can carry a payload of 2.5 kg. It has a range of 8-10 kilometres and can stay airborne for an hour. 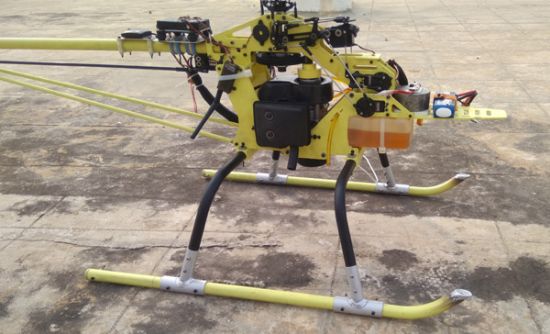 "With this demo, HAL’s Rotary Wing R&D Centre is well poised to employ its skills and capabilities to undertake development of Rotary UAVs of higher weight classes and weapons as payloads," the company said in a press release on Friday. The rotary UAV is the first outcome from its tie-ups with academia, says HAL which has established chairs at five IITs besides the Indian Institute of Science in Bangalore.

The mini helicopter can potentially also help in giving real-time inputs for pilots training on simulators. For instance, theoretical calculations can still take several hours. Take a simple question like figuring out the control angles at a given speed, says Venkatesan. "It takes about 10 hours on my computer to get that value. Of course, it depends on the sophistication of your model. But here, we can measure that real-time," he says.

Work on a technology project such as this takes time, patience and effort, says Venkatesan, who now teaches at IIT-Jodhpur. "It teaches you humility because when you don't know something, you simply don't know. But you have to find a way to solve the problem."