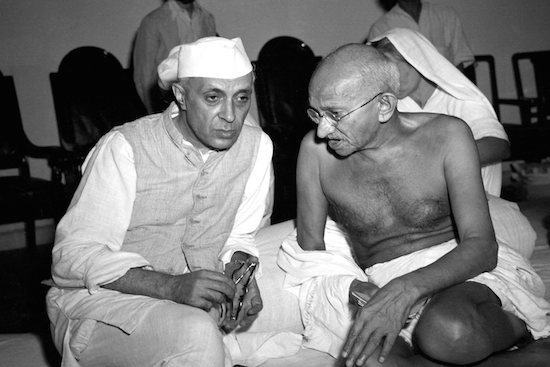 Kesari, the RSS mouthpiece in Kerala, has stirred up a fresh controversy by carrying an article in its October 17, 2014 edition, which suggests, albeit indirectly, that Nathuram Godse made a mistake in killing Mahatma Gandhi, when his target should have been the country’s first Prime Minister, Jawaharlal Nehru.

B. Gopalakrishnan, who fought and lost the Lok Sabha elections for the Chalakudy Lok Sabha constituency on a BJP ticket, suggests in the article that Nehru’s selfishness was responsible for many of the problems the country faces even after seven decades of independence.
Gopalakrishnan argues that Nehru only wanted Gandhi’s "khadi and cap" as symbols for the Indian National Congress.
Gandhi had wanted Congress to be dissolved after independence as its mission was over, Gopalakrishnan argues, and suggests that Nehru ridiculed the suggestion only because of his lust for power.
The article goes on to argue that Nehru clinically eliminated Gandhi, keeping him out of the the last round of talks with the British, leading up to Partition and independence, to serve his selfish ends.
Nehru thus stabbed Gandhi in the back, the article insinuates, whereas Godse pulled the trigger after a bowing respectfully.

“Nehru’s selfish politics was behind national tragedies such as Partition and Gandhi assassination. After evaluating Nathuram Godse’s arguments in the light of historical documents related to Partition, if students of history feel Godse aimed at the wrong target, they cannot be blamed. Nehru was solely responsible for Partition of the country.

It is significant that only recently Prime Minister Narendra Modi had reconstituted the committee to celebrate Nehru’s 125th anniversary, dropping many UPA appointees but retaining Suman Dubey, a former journalist and family friend of the Nehru-Gandhis.
As Prime Minister, Narendra Modi is ex officio head of the reconstituted 30-member committee which is to oversee yearlong celebrations starting November 14.
Sonia Gandhi had resigned from the committee after the election results in May.
Mahesh Rangarajan, director of the Nehru Memorial Museum and Library; historian and author Ramachandra Guha; former Bengal governor Gopalkrishna Gandhi; Tapati Guha Thakurta of Calcutta’s Centre for Studies in Social Sciences; and Sabyasachi Bhattacharya, former chairman of the Indian Council of Historical Research were recently replaced by former diplomat C.R. Gharekhan; former army chief V.P. Malik; Pratap Bhanu Mehta, a member of Delhi’s Centre for Policy Research; journalists Rajat Sharma and Swapan Dasgupta; and Maulana Mahmoood Madani, a former Rajya Sabha member.
The Sangh parivar’s antipathy for “Nehru and his santaan”, i.e. his descendants is well-known and Nehru has always been blamed by them for Partition, following the socialist model for the economy, and the 1962 war with China.
The latest article in Kerala is therefore being seen as the Sangh publicly distancing itself from the central government’s plans for the 125th anniversary of Nehru.
Murmurs of dissent had begun after Modi earmarked the birth anniversaries of Nehru on November 14 and Indira Gandhi for promoting his Clean India campaign.
BJP had sought to project Mr Modi’s surprise invocation of these two birth anniversaries as adopting a statesman-like attitude to foster a consensus-building agenda.
Calling the Kesari article as ‘disgusting and reprehensible’, Congress spokesperson Abhishek Manu Singhvi said, "It is painful that an RSS ideologue such as this has spoken something disgusting and reprehensible. It is time that people understand the true face of the RSS and the BJP. It is even more unfortunate that backers of such people are in power.”
The BJP and the RSS have not reacted to the controversy yet.