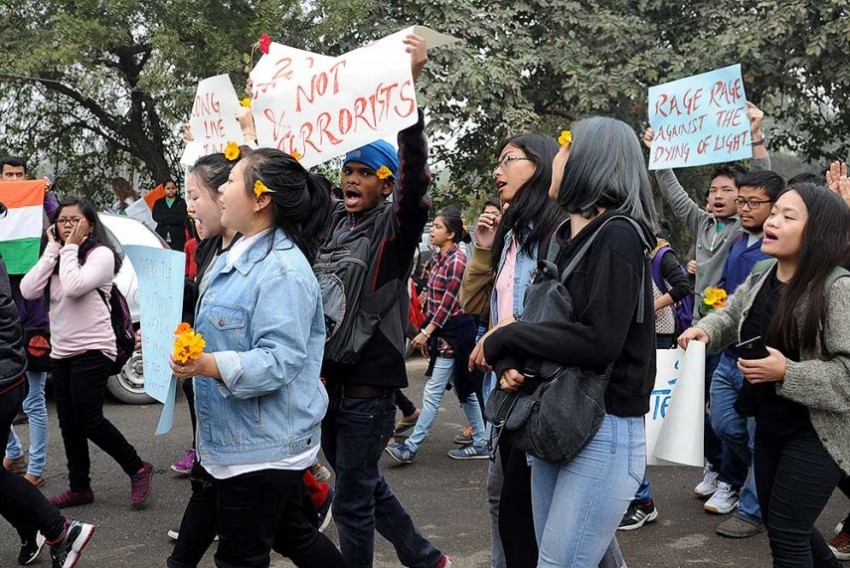 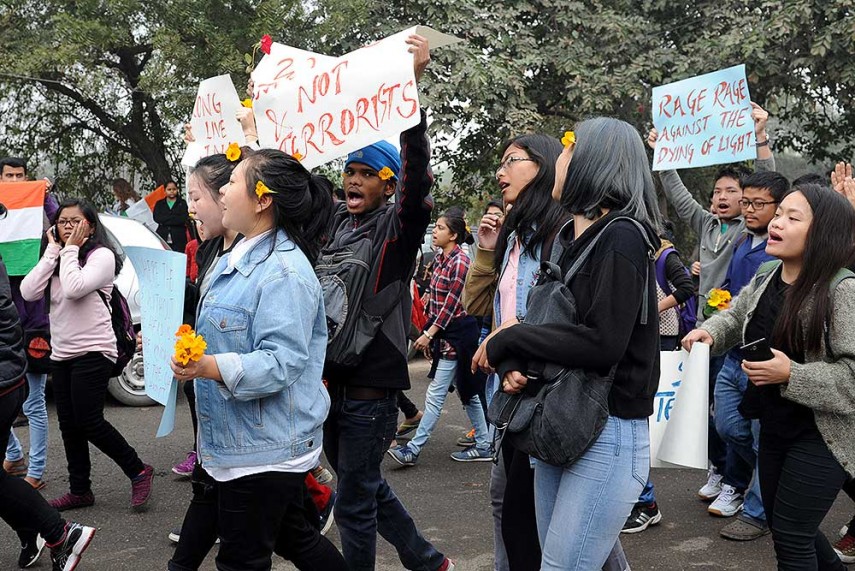 Activists blared on the loudspeaker, "Do not give into provocation. If anyone tries to tear your posters or heckle you, do not respond. They may pelt us with stones but we will wave flowers at them." Students raised red and white roses to the air.

On the day when the BJP government has said that all central universities should compulsorily hoist the Indian flag, thousands of students loosely labeled by right wing groups as 'anti-nationals,' demonstrated peacefully in New Delhi. The so called anti-nationals were not heckled by right wing 'nationalists' either.

The march from Mandi House in central Delhi to Jantar Mantar, the country's designated protest site, was the first time the JNU, protest for the release of their leader Kanniah Kumar, has formally and in strength stepped out of the campus. Activists say that this is the beginning of a long and nationwide movement.

Although people were watchful for right wing thugs, they did not show. Early on in the evening, six boys on bikes rode by. They were wearing headbands and t-shirts that called for the protection of 'gau-mata.' But they stared and rode on.

With rows of Delhi Police and CRPF personnel at the head and tail of the march, and heavy traffic on the other side, everyone expected violence- last night a message circulated on social media asking people to wear running shoes and carry pepper spray. The anxiety was not unfounded given that in this week alone right wing lawyers have twice assaulted Kanhaiya Kumar, students, journalists and lawyers, inside court premises, flouting Supreme Court orders, while the Delhi Police watched and was inactive.

But the anxiety became irrelevant as crowds began to swell and strength came from this solidarity. Fifteen buses were organised for JNU students to arrive for the demonstration, but it was fifteen too few. By 5pm, there may have been more than 5000 people making it impossible to see where the parade began or ended.

Although branded as anti-nationals, the students had something complex to convey on this matter. They were assembled not to declare their patriotism, but to uphold the constitution, the emblem of democratic values and the codification of the idea of India. And uphold they did- Students waved copies of the preamble to the Indian constitution, asking to constitute India into a "sovereign, socialist, secular, democratic republic" with justice, liberty and equality. Others waved copies of Article 51 A which prescribes the fundamental duties of all Indians.

This was one of those rare protests where more people turned out in real than those who had committed to attend on Facebook. Even for "veteran marcher" Zoya Hassan, this was special. "In the four decades I've done this, I have never seen something so big and significant. This is also significant because it is spontaneous and conscious- no one has manufactured this crowd by bringing in bus loads of party workers. Young people and the country's intelligentsia, has just come," says the Emeritus professor of political science at JNU.

To bring the evening together, Shehla Rashid addressed the thousands from the inside of a truck. Students sat on the road on Parliament Street and looked to her. Rashid, the 27 year old MPhil student who has put everything on the line to free President Kanhaiya, defended students around the country. Responding to criticism that students ought to show gratitude and submission for the tax money that funds them, she retorts, "Who funds the Prime Minister's suits and foreign trips? Does 'Start Up India' have any space for the marginalized castes? We will speak for the weakest person and for the last person. A student is innocent until proven guilty."