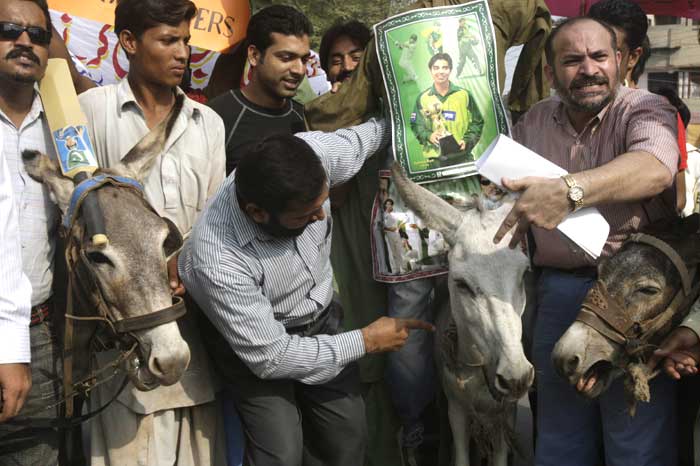 What is easily the best commentary so far on the whole raging spot-fixing controversy comes from Prem Panicker. One of the stories from his excellent blog-post:

There was once an opening batsman known as much for his impeccable technique as for his preternatural sense of the ebbs and flows, the rhythms, of Test cricket. The way he constructed an innings was both masterclass and template: the early watchfulness, the constant use of the well placed single to get away from strike and go to the other end, from where he could observe the behavior of pitch and bowler, the imperceptible change of gears and then, as the lunch interval loomed, the gradual down-shifting of gears as commentators marveled: ‘He is pulling down the shutters… he knows it is important not to give away his wicket just before the break… the onus is on him to return after the break and build his innings all over again… the man is a master of focus…’

I followed along, on radio first and later, on television, and I marveled along with the commentators, the experts. And then, years later, I heard a story — of how, when the toss went the way of his team and this opener went out to bat on the first day of a Test, a close relative would bet with not one, but several, bookies, about whether the batsman would get to 50 before lunch. Or not. ‘So he would get to 45 or so, and there would be 20 minutes to go before lunch, and he would defend like hell, and all these experts would talk about how he is downing shutters for lunch when the fact was, there was a lot of money riding on his not getting 50 before the break,’ is a paraphrase of what one of the bookies who suffered from such well-placed bets said.

That is just one story, of the dozens that come your way once you become a journalist, and gain entree into the Kabuki world of cricket.

Even if the current raging controversy is coming out of your ears, this is one piece you should not miss: We know it’s so, Joe