Planning A Train Ride On World’s Tallest Bridge? You Have To Wait Longer

Called the Udhampur-Srinagar-Baramulla Rail Line (USBRL) project, the Kashmir rail link has been in the making for a decade-and-a-half and has accumulated huge cost escalations in the bargain. 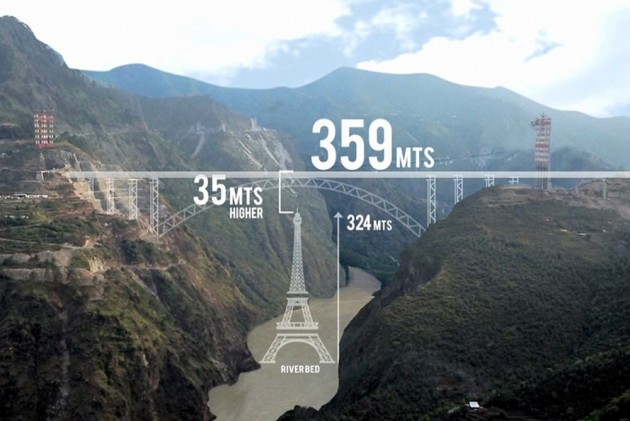 For those who might have planned a train ride next year on the “world’s highest” rail bridge straddling across the river Chenab on the under-construction Katra-Banihal section of the Kashmir rail link project, the news is disappointing. Bridge construction work was abruptly brought to a grinding halt last month following a reported dispute between the implementing agency (Konkan Rail Corporation) and contracting firm AFCONS. Because of the standoff, the Indian Railways are now likely to overshoot the revised bridge completion deadline of 2019.

At 359 meters above the river bed, the Chenab bridge is designed to be approximately five times taller than Delhi’s Qutub Minar and 35 meters higher than the Eiffel Tower.

Called the Udhampur-Srinagar-Baramulla Rail Line (USBRL) project, the Kashmir rail link has been in the making for a decade-and-a-half and has accumulated huge cost escalations in the bargain.

At the time of the award of the project in 2004, a 30-month deadline had been set on the completion of the line. Five extensions have since been granted and the project cost has climbed from the originally estimated Rs. 550 crores to Rs. 1,198 crores.

Cutting across the tough geographical terrain of the Himalayas, the USBRL – particularly the in-progress Katra-Banihal section - is among the world’s most challenging rail projects. At the same time, these facts are worth a mention: The Sydney Harbour Bridge of Australia – with a bigger span length of 503 meters – was built in less than four years. Eighty years back, the Bayonne Bridge in New York - span length of 504 meters – was completed in 38 months flat. The New River Gorge Bridge in West Virginia was built in 40 months in 1977.

As for the USBRL, interruptions and periods of lull in project execution have more frequently been brought about because of rivalries between different implementing agencies. At other times, design and alignment changes have been introduced. Two committees of experts have evaluated this prestigious “national project” in the past, flagging serious concerns about the safety and stability of the line and the bridge. A Public Interest Litigation raising similar concerns is also pending in courts.

The upshot of all this: Passengers will need to wait longer to enjoy an all-weather train journey from Jammu to Kashmir.

Elsewhere, things are not gloomy. T-18 – billed as India’s first engine-less train – has cleared the Commissioner of Railway Safety (CRS) certification and is now ready for commercial run. The indigenously-developed modern trainset – which has two driver trailer coaches with a nose cone at both ends to enable quicker turnaround time at destinations – faces just one issue: Which stretch to run the train on.

At a recent high-level meeting of the Rail Board, a dominant argument was that the Delhi-Varanasi line should be chosen for the inaugural run. Another strand of thought was that the Delhi-Allahabad route would serve the better purpose of showcasing the achievement to foreign delegates who are expected to travel down to the holy city for the next chapter of the Pravasi Bharati Diwas. The PBD, incidentally, will coincide with the Kumbha Mela (Hindu festival to mark the solar eclipse on the banks of River Ganga) at Allahabad. The more conservative opinion in the Rail Bhawan is that the train should be run on the Shatabdi route from Delhi to Bhopal.

December 26 (birth anniversary of former Prime Minister Atal Behari Vajpayee) and January 26(Republic Day) are among the tentative dates for launch of commercial operations. The Vikas Express and New India Express are among some suggestions on naming the train.

How hard is it to imagine that train accidents are also being caused because of the stress levels of station masters? A station master is usually the busiest railway employee: Constantly shuttling between his duties on running trains; on dealing with the commercial and management side of the operations; coordinating on signalling and safety issues and dealing with the public as well.

A standard SM is often seen juggling between the ten odd sets of telephone instruments lying on his table; now answering a call from a superior; now calling the gateman to close the gates at level crossings to allow the passage of a train.

Over the past two decades, approximately 3000 trains have rained down India’s rail network, while the number of stations has also grown. Cadres of station masters have not correspondingly grown, leading to huge stress levels in this category. “The situation is made worse because of the continued vacancy in the category. The sanctioned strength of SMs stands at 39,000, but 25 per cent of the posts are vacant,” said Manoj Gupta of the All India Station Masters Association.