Putin Effect: 'Shirtfront' Is Australian Word Of The Year 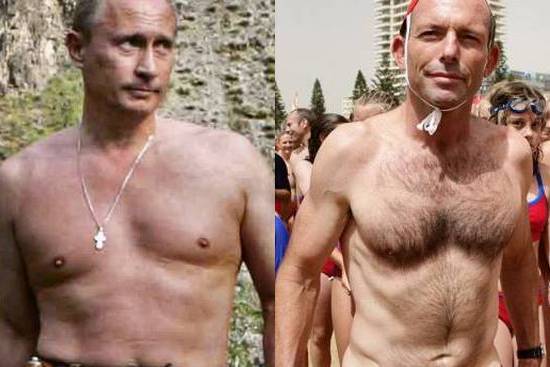 The Australian National Dictionary Center has named “shirtfront” its Australian word of the year. And, no,  it does not have anything to do with losing one's shirt, or even taking it off, as Mr Putin is often wont to do.

Shirtfront (Australian Rules) noun, "A fierce tackle, usually delivered by the shoulder to the chest of an opponent." verb, "The act of delivering such a tackle."—Oxford Australian Dictionary.

The first we heard of the word was when addressing the Australian Parliament in Canberra, Prime Minister Narendra Modi had said,

"(as) the third head of the government you are listening to this week, I do not know how you are doing this. Maybe this is Prime Minister [Tony] Abbott's way of shirtfronting you."

Mr Modi was of course taking a potshot at the Australian Prime Minister who, earlier in October this year, had talked of his plans to confront Russian President Vladimir Putin at the G20 summit:

Word of the year, apparently. My friend Matt was making these for #G20 for @avidreader4101. Demand: high #shirtfront pic.twitter.com/braKeOxeau

The comment was made in the context of 27 Australians being on board the Malaysia Airlines flight MH17 that crashed in eastern Ukraine, for which Moscow had been perceived to be responsible, but had led to widespread hilarity in its wake.

Before the @TonyAbbottMHR v Putin "Rumble in the G20-ungle", here are the stats you need to know. #shirtfront pic.twitter.com/npn1WdqTKA

Got a laugh out of @jonkudelka's cartoon in the @australian today. #shirtfront pic.twitter.com/0pzjKJDfk0

I mean... I don't even know where to begin... #shirtfront pic.twitter.com/1gLJvCnwaC

The hilarity got a great second wind when Mr Abbot's face-to-face encounter with Mr Putin actually resulted in a...koala cuddle. Mr Abbot had later backtracked on his word choice, saying instead that he would have a “very robust conversation” with Mr Putin, but the damage had been done by then

"Am I going to give Putin a cute koala to cuddle? You bet you are...you bet I am." A man of his word. #auspol #G20 pic.twitter.com/roOuPD5e8m

Abbott explained to Putin that a #shirtfront means hanging out with Koalas #auspol #G20Brisbane pic.twitter.com/LOhUkLYnVY

Earlier last month, the Oxford Dictionaries had announced 'Vape' their word of the year

v. Inhale and exhale the vapour produced by an electronic cigarette or similar device: I’d rather people vaped indoors than smoked outside: many smokers have started vaping e-cigarettes to help them cut down (as noun vaping) there’s concern that young people may take up vaping as a less harmful alternative to smoking

n. 1 An electronic cigarette or similar device: I’ve been using a vape now for 15 weeks

1.1 An act of inhaling and exhaling the vapour produced by an electronic cigarette or similar device: my cravings went away as soon as I took a vape

Other words on the Oxford shortlist were:

Bae n. used as a term of endearment for one’s romantic partner.

Budtender n. a person whose job is to serve customers in a cannabis dispensary or shop.

Contactless adj. relating to or involving technologies that allow a smart card, mobile phone, etc. to contact wirelessly to an electronic reader, typically in order to make a payment.

indyref, n. an abbreviation of ‘independence referendum’, in reference to the referendum on Scottish independence, held in Scotland on 18 September 2014, in which voters were asked to answer yes or no to the question ‘Should Scotland be an independent country?’

normcore n. a trend in which ordinary, unfashionable clothing is worn as a deliberate fashion statement.

slacktivism, n., informal actions performed via the Internet in support of a political or social cause but regarded as requiring little time or involvement, e.g. signing an online petition or joining a campaign group on a social media website; a blend of slacker and activism.

Earlier, Collins and Chambers dictionaries had named 'overshare' and 'photobomb' as words of the year for 2014.

Chambers editorial director David Swarbrick told the Guardian that the put-down overshare was “beautifully British” and a “subtle, yet devastating” insult:  “Some words were more celebratory; others more exacting. But ‘overshare’ won because it was pointedly relevant to so many of the other words that were considered.”

Bashtag— ‘a hashtag used for critical or abusive comments’

Hipster— redefined from its previous definition (‘a person who knows and appreciates up-to-date jazz; a member of the beat generation, 1950s and early 1960s’) to ‘a member of the generation born in the 1980-90s who look down on their native middle-class culture, and self-consciously adopt a bohemian lifestyle and mode of dress’.

For Collins Dictionary, "the essence of 2014” was captured by 'photobomb' beating 'devo max' and 'bakeoff.'

The first recorded mention of 'photobomb' is a Google search in 2008, but this year the word came into prominence following a tweeted photo going viral during the Commonwealth Games when the Queen accidentally photobombed two hockey players. Before that, of course, was Benedict Cumberbatch’s famous photobomb of U2 at the Oscars.

Collins also added 50,000 new words to the 12th edition of the dictionary, including some that you would definitely be familiar with:

Al desko—to eat at your desk

Meme—an idea or element of social behaviour passed on through generations in a culture, esp by imitation

Textonym—one of two or more words that can be generated by pressing the same key combinations on a mobile phone: 'kiss' and 'lips' are textonyms’.

Collins says it is intended as a compliment and was first used on Twitter in March 2007, hitting its peak in January 2012 and defines it as:

Adorkable— an intellectual person who is nerdy yet endearing,

Do you think if we were to look for an Indian word of the year, it might elicit the response: Are you serious? Hell yeah, do tell us your nominations.