The project benefits apart, the economic dynamics behind the ambitious Mumbai-Ahmedabad bullet train show that the country cannot afford to further burden its poor with increased tax. 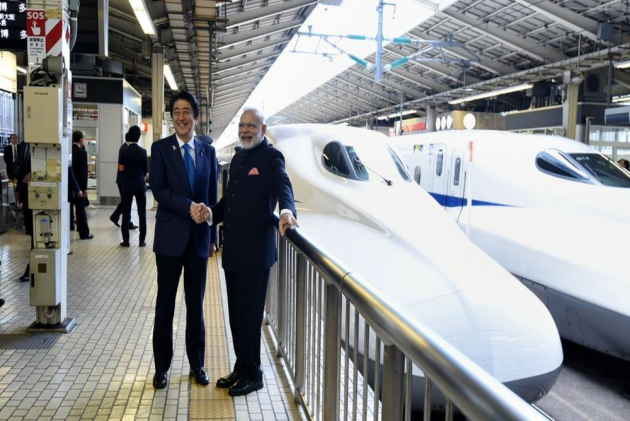 Recent foreign media reports suggesting that the Mumbai-Ahmedabad bullet train plan will overshoot the 2024 completion timeline on account of protests by Maharashtra farmers over land acquisition provoked a customary response from the Centre. Railways Minister Piyush Goyal said this week that such issues are being “exaggerated by sections that cling to a regressive mindset and ones that cannot and do not visualize India’s emergence amongst the comity of top nations of the world.” Further, he recalled that “computerisation was criticised; the prophets of doom had demolished the metro rail projects as well; even the Rajdhanis—launched almost fifty years ago—had been condemned as an elitist activity”. The sum and substance of such arguments: those opposed to the high-speed project do not want India to develop as a modern and powerful nation.

There a quite a few upsides to the Rs 1.10-crore Mumbai-Ahmedabad plan, billed as Prime Minister Narendra Modi’s signature project. Once it is completed, the Japanese ‘Shinkansen’ trains will dash about between the two cities at breakneck speeds of 300 kilometres per hour to complete the 534-km distance in two hours flat. This is in place of what is now usually eight hours of travel time by the Mail and Express trains on the route.

The Japanese government’s terms of the project’s loan agreement are attractive, with 80 per cent of the project cost being funded by the Japan International Cooperation Agency (JICA) at an interest rate of 0.1 percent. There is a moratorium period of half a century on loan repayment, starting from the 16th year of train operations. All this notwithstanding, there are yet reasons to be circumspect about the NDA government’s enthusiastic plan to build  a ‘Golden Quadrilateral’ network of high-speed rail corridors linking the country’s four major metropolitan centres, while connecting 20 other major cities in the process.

High-speed rail projects entail enormous capital costs. The United States has been struggling for years with the hugely expensive California high-speed project. Even in Japan, where high-speeds have been in operation for more than six decades, just about 40 per cent of the Shinkansen trains have been showing consistent profits.

India’s scenario is gloomier. According to a 2016 study by the Indian Institute of Management-Ahmedabad, Indian Railways will need to ferry between 88,000 to 1,18,000 passengers each day and operate 100 trains each day on the Mumbai-Ahmedabad route in order to service the loan. While this will be a challenge, the other and less talked about aspect is this: while the banking interest rate in Japan and France—also other European countries that have high-speed trains—ranges between 1 and 1.5 per cent; the interest rate in Indian banks ranges around 10 per cent. Even at an interest rate of 8 per cent, Indian Railways share of the project cost (estimated at approximately Rs 20,000 crore) will come at a relatively higher cost. Eventually, this burden will get passed on to the taxpayer, with a poor man from Assam, for instance, to pay for the subsidised travel of the rich on the Mumbai-Ahmedabad Shinkansen. For a country where the richest one per cent holds 73 per cent of the wealth, the NDA government’s over-kill on high-speed rail looks misplaced.

The bottom line is not an advocacy for the ‘Do Nothing’ approach. Indian Railways do need to scale up operations and modernise in terms of speed, safety and comfort. There is even a case that the Mumbai-Ahmedabad high-speed will enable the state-owned transporter to leapfrog into the frontiers of rail technology and provide the template for future development. It is also true that the high-speed funds could not have been “better utilised” to replace or strengthen the ageing assets of the mainline network of the Indian Railways, as the Japanese loan is linked to the Mumbai-Ahmedabad project alone. But development, as former railway minister Dinesh Trivedi says, ought not to come about in an unbalanced manner.

India’s semi-high-speed plans (trains moving at 160-200 kmph) has been in the making for several years. The punctuality ratio has dipped from 80 per cent at the start of the year to 65 per cent now. Trains, meanwhile, has been toppling over from the tracks. The usual governmental response at blaming the mess on the legacy of past regimes does not seem to have provided comfort to the common man. Some weeks ago, angry passengers of stationary Mail and Express trains were reported to have hurled stones and damaged windows of the premier Rajdhani trains at a wayside location in Bihar. They were apparently venting their frustration at the usual practice of Rajdhanis being allowed to pass, but then at the expense of other passenger trains. If the concerns of the common passengers continue to remain neglected, one could well get to witness more and more of the “Bihar-type” of incidents.

(The author can be contacted at srinandjha@gmail.com.)